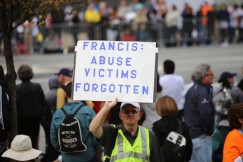 Veteran Vatican journalist, John L. Allen, Jr., reported the stance, citing a presentation made by French Monsignor Tony Anatrella — Monsignor is an Italian pronunciation for an honor bestowed upon members of the clergy of the Catholic Church. Anatrella, a consultant to the Pontifical Council for the Family and the Pontifical Council for Health Care Workers — each a special department of the Vatican — wrote training documents for new bishops that the Church released last week.

According to a citation in The Guardian, Anatrella authored the following statement:

According to the state of civil laws of each country where reporting is obligatory, it is not necessarily the duty of the bishop to report suspects to authorities, the police, or state prosecutors in the moments when they are made aware of crimes or sinful deeds.

Moral condemnation aside, the presumptive legal angle of the Church is startling.

LawNewz.com spoke with Constitutional Law scholar Marci Hamilton, an expert on, and advocate for, the U.S. Constitution’s required separation of church and state. Hamilton remarked,

Catholics and Mormons argue they have a confessional privilege; they don’t have to report things they hear in confession. That privilege is a privilege, not a right. Frequently, they [the clergy] find out about these other issues anyway, so they still have a mandate that requires reporting. Regardless of what bishops here or abroad say, there is an obligation in most states to report abuse.

As one might imagine, victim-support groups are indignant, according to UPI. Nicky Davis, a victim abuse advocate and leader of Survivors Network of those Abused by Priests, or SNAP, echoed the sentiments of Hamilton.

Their systems function to protect the interests of the institution. They don’t put the protection of children first.

Anatrella is perhaps best known for advancing controversial views on “gender theory,” the belief that the increasing acceptance of homosexuality in western countries exposes children to “radical notions of sexual orientation.” Ignorance is bliss, suppression may be too.

A new governing body, the Pontifical Commission for the Protection of Minors, created by Pope Francis for the purpose of establishing “best practices” regarding child abuse, was not consulted in the creation of the new training documents.