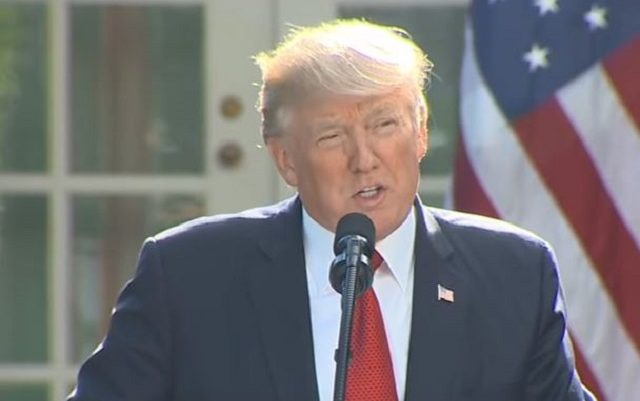 Tuesday morning, President Donald Trump retweeted a post from Fox News’ Eric Bolling, where Bolling advertised his new book, saying Trump already has a copy. The tweet also included a link so that people can purchase the book.

Good morning friends! “The Swamp” out today. President Trump has a copy… get yours here https://t.co/TntLPNCCjR. #maga!!

This may sound familiar. Back in February, Kellyanne Conway got herself in trouble by promoting Ivanka Trump‘s brand in a televised interview. This led to a complaint and an investigation of whether Conway violated 5 CFR § 2635.702, which says, “An employee shall not use his public office … for the endorsement of any product[.] While Conway ultimately didn’t face official discipline, since a White House lawyer felt there was no “nefarious motive,” she was pulled from TV appearances for some time.

So what about Trump? Could his retweet result in a complaint or investigation? Well, if there are, it would be unlikely that Trump would face legal consequences.

Larry Noble from the Campaign Legal Center told LawNewz.com that the prohibition against endorsements ” is generally considered to not technically apply to the president.” Still, Noble said, Trump’s activity here is out of the ordinary, and could be viewed as improper, even if it’s not illegal. “It is generally considered inappropriate and a violation of ethical principles for the president to endorse products or businesses,” he said.

Still, a violation of a general principle is not the same as violating an actual rule or prohibition. So while it may seem odd to see a President using his official Twitter account to help sell an author’s book, he’s within his rights to do so.