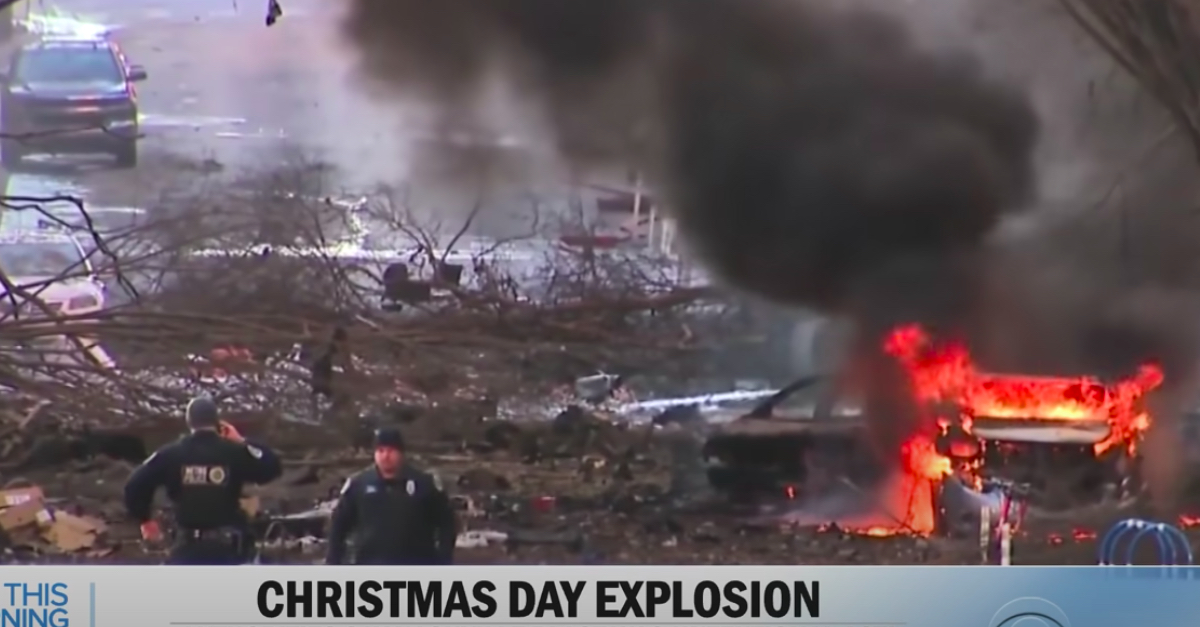 Law enforcement officials in Tennessee have identified a person of interest in connection with a Christmas Day explosion in downtown Nashville and and appear to be searching the man’s home, several news outlets reported Saturday afternoon.

While no arrest has been made, agents with the Federal Bureau of Investigation (FBI) and the Bureau of Alcohol, Tobacco, Firearms, and Explosives (ATF) teamed with officers from the Metro Nashville Police Department to search the Antioch home believed to be that of Anthony Quinn Warner, multiple sources confirmed to CBS News. Antioch is a neighborhood in Nashville.

According to CBS, Warner, a 63-year-old white male, is said to have a mobile recreational vehicle (RV) that is a similar make and model as the one at the scene of the blast. Video and photos of the RV taken prior to the explosion also appear strikingly similar to Google Maps photographs of a vehicle parked in Warner’s yard in approximately May of 2019.

“A team wearing tactical gear marked with both ATF and FBI insignias entered the residence and cleared the home around 2:30 p.m. The bomb squad confirmed no one was inside, according to FBI personnel at the scene. An evidence team entered the residence around that time to conduct a search,” the Tennessean reported.

Darrell DeBusk, an FBI public affairs officer, told the outlet that authorities were on the premises to conduct “court authorized activity” relating to the investigation — which suggests a warrant was obtained.

The strange circumstances, which left at least three people injured, have perplexed investigators looking into the Music City explosion.

The blast—which happened at around 6:30 a.m.—was preceded by a loud computerized voice emanating from an RV that warned people to evacuate the area, saying the vehicle would soon explode.

“Evacuate now. There is a bomb. A bomb is in this vehicle and will explode,” the voice said, according to the Tennessean.

The voice then changed to a countdown for the final 15-minutes before blowing up, destroying several buildings and knocking out wireless service for a significant portion of the region.

Nashville Mayor John Cooper instituted a curfew in the downtown area via executive order that will remain in effect until Sunday afternoon and flights were temporarily grounded at the Nashville International Airport.

Metro Police Chief John Drake said it was unclear whether the bomber was in the vehicle when it exploded, but confirmed that “tissue” found at the scene “could be” human remains.  On Saturday, FEMA said that the tissue samples “were determined to be human remains,” the Associated Press reported.