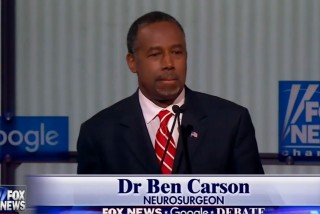 During Thursday night’s debate, retired neurosurgeon Ben Carson did a very odd thing when moderators told candidates that they had one chance to appeal to voters in closing statements. He decided to recite the Preamble of the U.S. Constitution. That was pretty much all he said.

But, Politico, pointed out this morning, he had a little trouble:

“Please think of our founding fathers as you listen,” Carson said, before he began reciting: “We the people of the United States, in order to form a more perfect union, establish justice, insure domestic tranquility, provide for the common defense, promote the general welfare, and secure the benefits of liberty to ourselves and our posterity, do ordain and establish this Constitution of the United States of America. Folks, it’s not too late. Enough said.”

Carson substituted “benefits” for “blessings” of liberty, the actual text, and he said “Constitution of” instead of “Constitution for” the United States of America.

To Carson’s credit, the errors are pretty minor. But still, if you are going to recite the Preamble before an audience of millions, you might want to make sure you have it memorized correctly.

Here are his remarks:

Some pretty funny comments about his debate performance:

“I’m going to try reciting The Preamble without singing it like I learned on Schoolhouse Rock.” — Ben Carson #closingstatments #GOPDebate

So far Ben Carson isn’t coughing which is officially the best news of the night so far. #GOPDebate