One Day After Trump Called Emoluments Clause ‘Phony,’ Court Sets Hearing in Emoluments Case Against Him 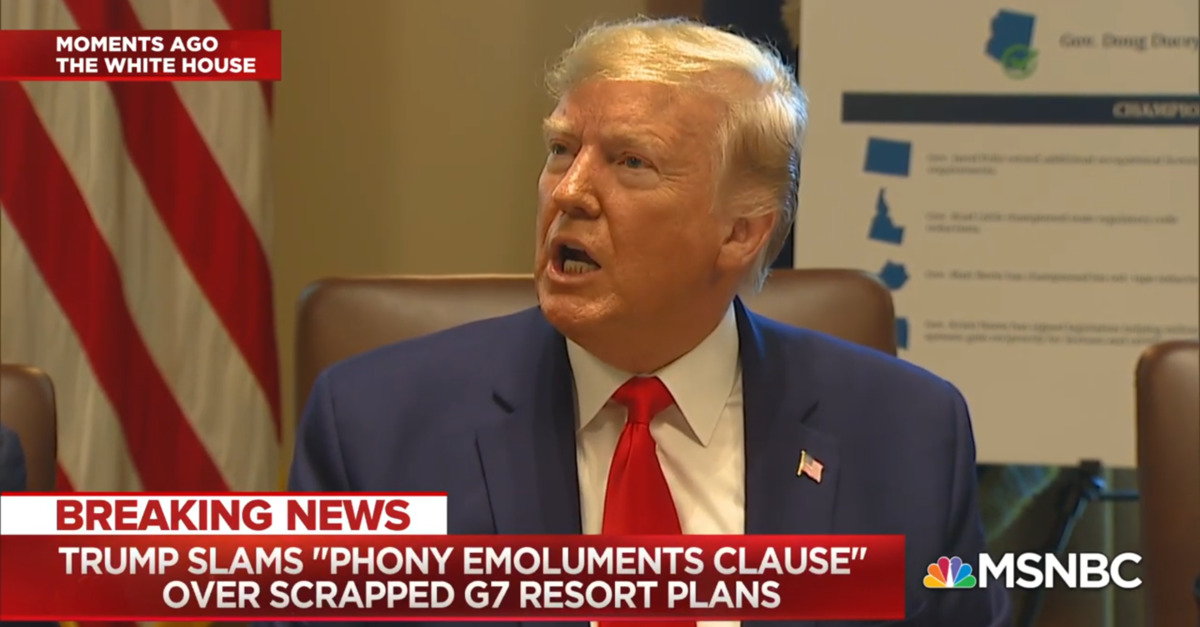 Time is a flat circle left on your desk by a hot cup of covfefe.

One day after President Donald Trump called the Emoluments Clause of the U.S. Constitution “phony” during a media assemblage, a federal court scheduled a proceeding to address an ongoing Emoluments Clause lawsuit aimed at Trump, meaning that two Emoluments-related proceedings will occur in the same week this December.

Recall: while being questioned on Monday about his since-abandoned attempt to host the 2020 Group of Seven (G-7) meeting at the Trump National Doral Golf Club in Miami, the 45th president raged against the media and Democrats for causing the controversy.

“You people with this phony Emoluments Clause,” Trump complained.

Several legal experts quickly noted that the Emoluments Clause is not phony whatsoever–it’s an integral part of the U.S. Constitution.

These clauses combined–though seldom invoked–have been understood from time immemorial to stand for and enshrine the idea and ideal that U.S. presidents cannot make substantial profits from either foreign or domestic sources during their time in office if such profits are made as a direct or indirect result of their being president.

“It is harder to imagine a more clear example of exactly what the emoluments restrictions were designed to prevent than the president of the United States literally hosting international events in his official capacity at his privately owned properties,” national security attorney Bradley P. Moss told Law&Crime regarding the initial Doral decision.

Trump, of course, ultimately buckled on the G-7 location site. This volte-face was reportedly due to criticism from fellow Republicans.

One lawsuit, stylized as Richard Blumenthal, et, al. v. Donald Trump, is currently pending before the U.S. District Court for the District of Columbia. This action was brought by 30 Democratic Party Senators and 166 Representatives. The suit alleges that Trump has violated and continues to violate the Title of Nobility Clause (also known as the Foreign Emoluments Clause) by accepting gifts and payments from foreign governments without congressional approval.

The 57-page the filing notes:

Because Defendant has failed to come to Congress and seek consent before accepting foreign emoluments that have been confirmed through public reporting, it is impossible to know whether Defendant is accepting other foreign emoluments that have not yet been made public. Indeed, through his personal attorney, Defendant has indicated that he does not believe the Constitution requires him to seek or obtain Congress’s consent before accepting benefits arising out of exchanges between foreign states and his businesses.

On Tuesday, the D.C. District Court scheduled arguments for December 9. Arguments in another Emoluments Clause case–in an entirely different circuit–will be heard December 12. That was scheduled the day the case was revived.

That second case is being brought by the attorneys general of Maryland and the District of Columbia. Filed over the summer, the case was initially shelved by a three-judge panel of GOP appointees.

The full court, however, brought the case back to legal life earlier this month–agreeing to hear the case all together or, in legalese: en banc.

That case, stylized as D.C. and Maryland v. Trump also alleges that Trump has violated and continues to violate the Foreign Emoluments Clause–and other “unprecedented constitutional violations”–through the operation of his luxury D.C. Trump International Hotel.

These aren’t the only Emoluments-related cases to keep an eye on.