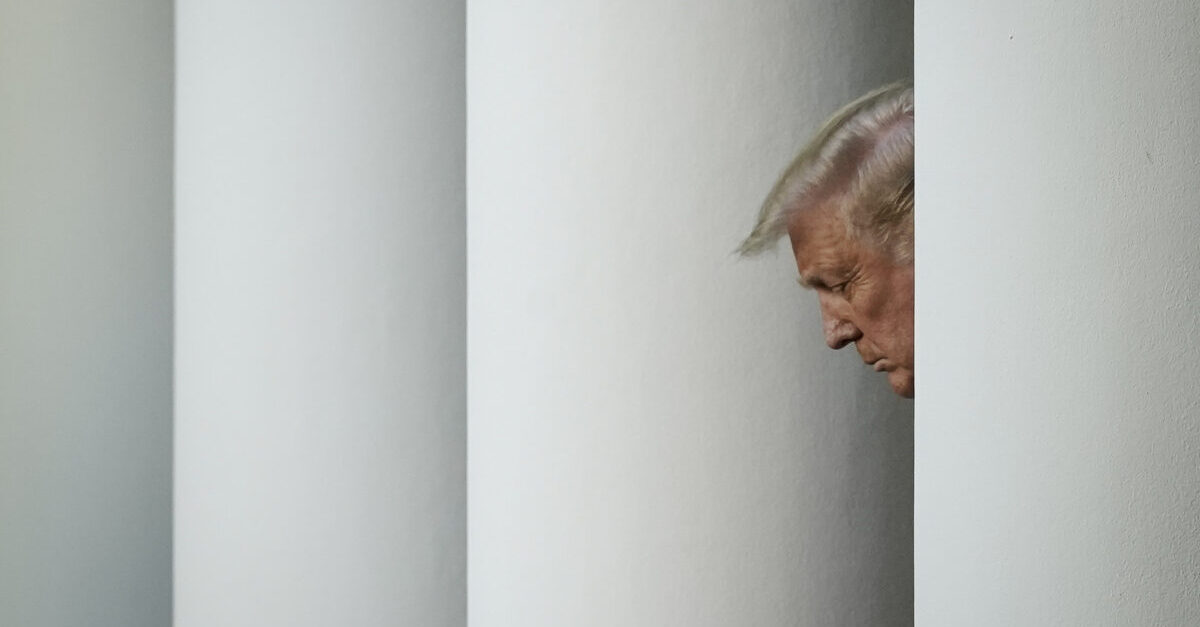 President Donald Trump walks between columns outside the White House.

President Donald Trump was given a series of deadlines to produce his DNA and other evidence as part of mandatory discovery in an ongoing defamation lawsuit on Monday.

E. Jean Carroll is an author and Elle advice columnist who accused the 45th president of raping her sometime in late 1995 or early 1996. She initially made that accusation—one of over 20 sexual assault allegations against Trump—during the summer of 2019. Trump later denied the accusation in an interview with The Hill and Caroll subsequently sued for defamation in New York.

A letter sent by Carroll’s attorneys notes that prior deadlines for the production of the DNA evidence were put on hold by an appeals court pending the outcome of a decision in a similar case filed by former Apprentice contestant Summer Zervos–who alleged that Trump sexually assaulted her in 2007.

“As a result of that decision, the relevant deadlines in the Court’s Preliminary Conference Order dated December 12, 2020 are no longer ‘temporarily stayed,” the letter sent to Trump attorney Marc Kasowitz notes. “This letter sets forth our understanding of the current status of this case and discovery in this case as a result of the Court’s recent decision.”

The appeals court previously pushed back the relevant discovery deadlines for a period comprising “the amount of time from January 31 [2020] to the date of the Court’s decision on Defendant’s motion to stay, plus five business days.”

Trump’s defense team had requested the temporary hold, but on August 7 the New York Supreme Court said the hold should expire before then.

Justice Verna Saunders determined that a recent landmark U.S. Supreme Court ruling had forced the state court’s hand to decide in favor of the plaintiff. That ruling was the result of a subpoena for the 45th president’s financial records filed by Manhattan District Attorney Cyrus Vance.

“This court construes the holding in Vance applicable to all state court proceedings in which a sitting President is involved, including those involving his or her unofficial/personal conduct,” Saunders wrote.

“We are now eager to move forward with discovery so that we can prove that Donald Trump defamed E. Jean Carroll when he lied about her in connection with her brave decision to tell the truth about the fact that Donald Trump had sexually assaulted her,” Caroll’s attorney Roberta Kaplan said last week.

The upshot of the state court’s ruling is that the parties in the defamation lawsuit will now commence with discovery–while still more or less abiding by the original time frame for the pause.

Since the stay was extinguished on August 7, 2020, discovery production must now be back on track by August 14, 2020 because that’s when the “five business days” requirement is up. Trump could, however, appeal the state supreme court’s August 7 ruling.

“[Trump’s] deadline to respond to [Carroll’s] Second Set of Document Requests (originally January 30, 2020) is now August 14, 2020, and the date set by [Carroll’s] First Notice to Submit to Physical Examination (originally March 2, 2020) is now September 15, 2020,” Kaplan wrote on Monday. “We can be flexible with respect to the location and method for obtaining [Trump’s] DNA sample in order to accommodate security needs or other issues. Please let us know if you would like to discuss.”

The letter also rubs Trump’s nose in the Vance decision:

Because the United States Supreme Court has made it clear that Presidents are not exempt from giving testimony in civil cases, we fully expect that Defendant will testify in a timely manner. President Clinton made time to testify under oath about allegations of sexual harassment, and so President Trump can surely make time to testify about allegations of sexual assault and defamation. His testimony about what he did (and what he said) will strike to the very heart of the case and offer evidence that cannot be obtained from any other sources. He is obviously required to provide it.

“We are hopeful that [Trump] now recognizes, as did Judge Saunders, that Trump v. Vance leaves no doubt that his claim to presidential immunity necessarily fails,” the letter concludes. “If you intend to appeal Judge Saunders’ decision to the First Department, however, please let us know when you would like to meet and confer about such an appeal.”