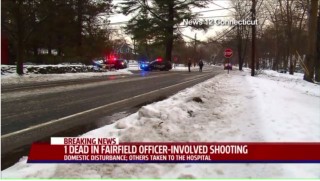 Below find LawNewz.com contributor William Crosby’s daily roundup of attorneys, and judges who find themselves in the news.

Oregon lawyer Ross Day quietly agreed to pay $140,000 to settle a sex harassment lawsuit filed by a female lawyer in his law firm.  After making the initial installment on the settlement, Day now claims he doesn’t have to pay any of the remaining $140,000 because the female lawyer “blabbed” about the settlement terms — violating a nondisclosure agreement that was in the deal, according to the Oregonian.

More at the Oregonian

A 20-year veteran of the Hartford police responding to a domestic violence call found Christopher Andrews, 52 wielding an undisclosed weapon.  The police also found the lawyer’s 15 year old son armed with a baseball bat that the son said he took from his dad who was using the bat to beat the boy’s mother and siblings.  The teen surrendered the bat in compliance with instructions from the police, but the elder Andrews was shot to death when he refused repeated instructions to surrender his weapon.

The police did discover two other children battered and another woman with stab wounds and blunt force trauma to her head allegedly inflicted by the dead lawyer.

More at the Hartford Courant

The owner of a counseling service which fraudulently provided “certificates of completion” to probation clients who did not actually attend any counseling or to lawyers for criminal defendants who have been ordered to attend counseling—was sentenced to prison despite counsel pleas for probation according to the a story in the Las Vegas Review Journal. Five others were indicted in the scheme including lawyers Brian Bloomfield and Vicki Greco.

While there will be years of reverberations from the one-term Kathleen Kane AG tenure in Pennsylvania—Kathleen Kane, herself, will not try to hold on to the position beyond the present term announcing that she will not run for reelection.  Kane somehow avoided a removal vote scheduled last Wednesday but her present lack of a law license and pending prosecution caused her political support to evaporate. Pennlive.com reports on the Kane decision with a nifty video summary giving background on the rise and fall of Attorney General Kane.

William Crosby is a contributor at LawNewz.com. He also authored the Bad Lawyer Blawg.