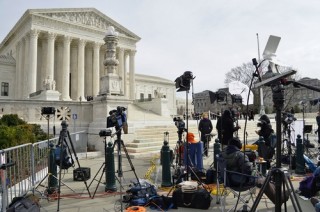 Back in 2012, I penned a piece excoriating the media for its regular misstatements about the U.S. Supreme Court’s controversial Citizens United ruling. The opinion, which deemed certain portions of the McCain-Feingold campaign finance law unconstitutional on First Amendment grounds, has continued to serve as a media boogeyman for all problems with money in politics.

Back then, I disclosed my own concerns about certain aspects of the opinion (even though my dad Floyd Abrams argued it pro bono ​for Senator Mitch McConnell on the winning side). As I wrote, we don’t have to embrace the opinion to long for the media to accurately convey the ruling:

My personal view on the nuances of the ruling is beside the point. This is about what the ruling said and didn’t say, what it did and didn’t do. And about how so many in the media keep getting the ruling and its impact dead wrong.

I remain flabbergasted that now, years later, even a venerable and well-funded and researched program like 60 Minutes would not just parrot the errors of other media organizations about the opinion and its impact, but seemingly base an entire piece around those misconceptions.

In my 2012 analysis, I reviewed the two most common media myths and inventions about the opinion:

Wrong. The Court ruled just the opposite and upheld, by an 8-1 vote, the McCain-Feingold requirement of identifying donors.

For the sake of clarity, there is simply no legitimate argument that Citizens United ​limited or impaired, in any way, ​disclosure requirements despite much false media reporting to the contrary. As even election law expert and Citizens United detractor Professor Rick Hasen conceded  “it is up to Congress, not the Supreme Court, to fix the disclosure problems with Super PACs.”

Myth 2: That the Court’s ruling in Citizens United opened the door to wealthy individuals like Sheldon Adelson to pour millions of dollars into PACs.

Wrong again. The Citizens United ruling had NOTHING to do with the ability of individuals to spend their money to support candidates. That had been decided back in 1976, when the Supreme Court decided that the First Amendment protected the right of individuals to make unlimited independent expenditures supporting or opposing candidates for federal office. In Citizens United, the Court ruled that corporations and unions were entitled to the same rights. It wasn’t that long ago, after all, that the Swift Boat ads, legally paid for by individuals, soiled John Kerry during the 2004 campaign.”

Hasen and other serious, mostly left-leaning organizations however, believe that Citizens United (and more specifically its progeny) have led “indirectly but surely, to the emergence of Super PACs.” And there is no question that Super PACs have become a force in the wake of Citizens United. Exactly why — the cause and effect — is, at the least, subject to interpretation.

But a “legal cloud” arguably hovered over what became known as 527s, you know, the organizations the Swiftboaters used to attack John Kerry and which George Soros then used to counter with $23 million of pro-Kerry ads. ​Before the ruling, a question that arguably remained undecided was whether individuals could band together under one of these legal umbrellas to give unlimited money to influence an election. One can certainly make a case that Citizens United effectively, ​although not directly, eliminated any ambiguity. ​Individuals,​ who could spend unlimited amounts on independent advertising before the ruling may now, ​as part of a group unambiguously spend​ unlimited amounts in ​what have become known as Super PACs (so may corporations and unions).

It is n​ot that the Citizens United court ruled on that issue or even permitted it per se, but the language of the opinion was read by later courts in that way, ​and further interpretation by the FEC provided a sort of psychological assurance to anyone who might have been deterred from doing so based on any uncertainty about the law. So, the ​argument goes, Citizens United indirectly ​led to increased donations from wealthy individuals who now felt assured that their spending together on independent advertising was unequivocally legal ​via Super PACs.​

​Lets be perfectly clear though, the doomsayers who warned of the massive deleterious impact of corporate dollars appear to have been completely off the mark. So when the New York Times predicted, in response​ to the Citizens United ruling, that now corporations would use “their vast treasuries to overwhelm elections”​ it was simply wrong. And when the Washington Post expressed concern that corporate money would “overwhelm … the contributions of individuals” that was wrong too. It’s also incontrovertible that donations to Super PACs must be, and are, made public to the dollar. That’s why we know how much the Koch brothers and Sheldon Adelson have spent to support their favorites. So the claim that Citizens United ​is responsible for “dark money” expenditures ​is once again pure fiction.

There is one critical issue, ​that may lead many to get this aspect of the ​case wrong: Super PACs have to report the identities of all their donors but certain non-profits don’t have the same disclosure requirements ​and so they ​can put money into Super PACs as the named non-profit group ​without disclosing all of that group’s individual donors.​ But pointing the finger of blame for that towards Citizens United is even more incomprehensible. ​It is IRS rules (and nothing in Citizens United) that permits vast electoral expenditures to be made by tax-exempt organizations so that’s the responsibility​ of the IRS, not the Supreme Court.

It with that background that we examine this weekend’s interesting and important 60 Minutes piece on congressional call centers. Members of Congress were exposed for the absurd amount of hours they now spend at off-site call centers dialing for dollars.

Near the top of the 60 Minutes piece, the thesis became clear:

The pressure on candidates to raise money has ratcheted up since the Supreme Court’s Citizens United decision in 2010. That allowed unlimited spending by corporations, unions and individuals in elections.

CBS then interviewed Republican member of Congress Reid Ribble who supports the “Stop Act,” which would prevent all federal elected officials from directly soliciting donations. He helped to support the 60 Minutes thesis:

If members would be candid, there’s a lot of frustration centered around it. And some of this is the result of Citizens United, the Supreme Court decision that opened up really corporate dollars into the system. And so, if you want to have your own voice, if you want your voice to be heard as opposed to some outside group speaking for you, you better– you better do your job and raise enough money that you can.

Now bravo to Congressman Ribble for distinguishing between Super PACs which are outside groups not permitted to engage directly with the candidates (save that debate for another day) and the sort of direct fundraising that 60 Minutes exposed here. To be clear, the fundraising in the piece has nothing to do with Super PACs (apart from maybe suggesting an even more indirect link; that their growth forces candidates to raise more to compete). Restrictions remain in place on how much any person or entity can donate directly to a candidate. ​And while Representative Ribble may benefit politically by blaming corporate spending, there is simply no evidence that the corporate dollars Citizens United permitted to be spent have had any sort of major impact on his campaign, or, in fact, on the ongoing presidential campaign.

​Norah O’Donnell, who is a terrific correspondent and anchor then asked another member of Congress this:

Before Citizens United, about how many hours a day would you have to spend on the phone raising money?

Lets stop and examine that question. Yes, more money has been dumped into politics, dominantly from individuals or their families since Citizen United was decided. But why is 60 Minutes using a ruling about corporate money (which has not flooded elections) to demonstrate that members of Congress have to make so many more fundraising ​calls to raise money directly, not through independent Super PACs? Representative Ribble apparently is seeking​ to respond to political advertisements by others who favored his election (–“some outside group speaking for you”, as he called it.)

Is the ruling ​necessarily the problem? Or could it be​ that now, more than ever, increased polar divisions within the public about politics have made rich ​people invest more? Or maybe the rich are simply getting richer or for some other reasons? Some have even argued that the ruling levels the playing field for those challenging incumbents.

​Regardless of one’s perspective on the ruling, what is it about Citizens United that leads news organizations to forego the typical caveats associated with what are, at the very least, controversial conclusions? How about the typical introductory media phrases such as “some believe” or “some” or even “many” argue. . .?” Not so here. In addition to factual inaccuracies, ​it’s just stated as fact that Citizens United as opposed to all the other possible causes had a specific, negative impact.

I’d have to put in about an hour, maybe an hour and a half, at most, two hours a day into fundraising. And that’s the way it went until 2010, when Citizens United was enacted. At that point, everything changed. And I had to increase that to two, three, sometimes four hours a day, depending on what was happening in the schedule.

​He may want to blame Citizens United but ​why do none of the regular journalistic rules seem to apply when it comes to this case? This was a really important piece of journalism and 60 Minutes deserves serious kudos, but unnecessary mistakes and what feels like advocacy surrounding Citizens United detract from the power and credibility of the story.

You may disagree with the opinion, you may think that expanding the ability of corporations to fund campaign messaging is a true danger, or just, as I do, that outside money is a major concern for our democratic system. But that doesn’t change the fact that the political chattering set ought to be far more concerned and outraged by the indolence, indifference or just bias, that has led to the widespread misinformation by the media about what the court actually considered and ultimately ruled.

Those were my sentiments in 2012 on the media coverage of this important case and sadly it applies just as vigorously today.