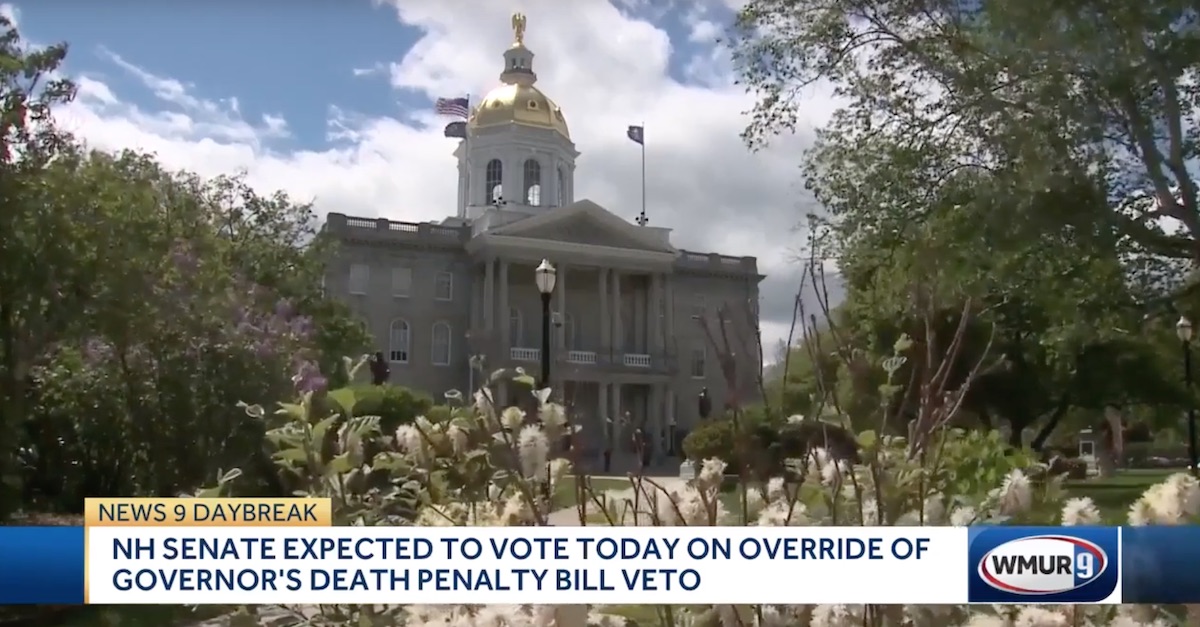 WMUR reported that the N.H. Senate voted 16-8 to override the governor’s veto. Sununu said that he was disappointed in the decision and that he opposed the repeal because he felt it was the “right thing to do.”

“I have consistently stood with law enforcement, families of crime victims, and advocates for justice in opposing a repeal of the death penalty because it is the right thing to do. I am incredibly disappointed that the Senate chose to override my veto,” he said.

Groups like Conservatives Concerned About the Death Penalty (CCADP) and the National Association of Criminal Defense Lawyers (NACDL), however, praised the move by New Hampshire lawmakers.

“Ending New Hampshire’s death penalty would not have been possible without significant Republican support,” CCADP National Manager Hannah Cox said in a statement obtained by Law&Crime. “Increasing numbers of GOP state lawmakers believe capital punishment does not align with their conservative values of limited government, fiscal responsibility, and valuing life. The state of New Hampshire will be much better off because of it.”

NACDL noted that New Hampshire was not just the 21st state to abolish or repeal the death penalty, it was also the last state in New England to do so. That means the entire region known as New England no longer practices the death penalty. NACDL also pointed out that it took bipartisan support to achieve this goal.

“NACDL applauds the bipartisan courage and leadership of the New Hampshire legislature in ridding that state of the scourge of the death penalty,” NACDL President Drew Findling said in a statement to Law&Crime. “As we have said before, time and again, the death penalty, as much of America’s criminal justice system, has been demonstrated to be racist, discriminatory, ineffective, expensive, and a stain on this nation. The death penalty is absolutely terrible criminal justice policy, and provably so. And it is just plain wrong, as recognized by the basic human rights standards of the vast majority of nations around the world.”

Equal Justice USA Executive Director Shari Silberstein said the repeal was historic and could be a sign that other states will follow in New Hampshire’s footsteps.

“The leaders in New Hampshire who made history today deserve the highest praise for recognizing the injustice of a deeply broken system and coming together across party lines to move the state forward. I believe more states across the nation, inspired by what New Hampshire accomplished, will recognize that the death penalty cannot exist in a society that aspires to true justice.”