In case you missed it, two federal law enforcement sources were cited in the report claiming that President Trump directed Cohen to lie to Congress. Cohen, you may recall, pleaded guilty in Mueller‘s probe to making false statements to Congress about the Trump Tower Moscow negotiation known as the Moscow Project. Cohen admitted that he lied when he said negotiations ended in Jan. 2016, but BuzzFeed claimed Trump told Cohen to tell those lies. This raised new questions about the president’s legal exposure, and sparked a day’s worth of “if it’s true” qualifications.

The revelation came after Cohen had already admitted in federal court that Trump “directed” him to make hush payments to influence the 2016 election. What BuzzFeed was alleging occurred would then be a second instance of Cohen’s illegal activity implicating Trump in a crime.

But Mueller’s office saw fit to say, without getting into specifics, that BuzzFeed’s reporting was “not accurate.”

“BuzzFeed’s description of specific statements to the Special Counsel’s Office, and characterization of documents and testimony obtained by this office, regarding Michael Cohen’s Congressional testimony are not accurate,” Carr said.

“Any suggestion — from any source — that the president counseled Michael Cohen to lie is categorically false,” he said.

Cohen’s former attorney turned spokesman Lanny Davis did not deny the report, but declined to comment.

“Out of respect for Mr. Mueller’s and the Office of Special Counsel’s investigation, Mr. Cohen declined to respond to the questions asked by the reporters and so do I,” Davis said.

If the BuzzFeed story turns out to fall flat, it wouldn’t be the first time that bombshell reports related to Mueller’s investigation did so. There have been a few stories that have attracted a lot of attention, but the overarching claims have gotten little to no corroboration or confirmation from other news organizations.

The Guardian claimed that Paul Manafort met WikiLeaks founder Julian Assange in the Ecuadorian embassy in 2013, 2015 and the spring of 2016. Manafort and Assange quickly issued unequivocal denials, and the story did not gain more traction.

Assange did recently threaten to sue, though.

Another recent story that got the news cycle buzzing came from McClatchy DC. The outlet published a report citing multiple anonymous sources claiming special counsel Mueller had cell phone data to corroborate the Steele Dossier claim that Cohen was near Prague in the summer of 2016.

If true, as Law&Crime’s Ronn Blitzer explained at the time, it would be a significant development, since the unverified dossier compiled by Christopher Steele would at least have some corroborating evidence:

The cell phone data is significant because it lends at least a degree of credence to the Steele Dossier, which Trump supporters claim was improperly used to acquire a warrant for surveillance of former Trump campaign adviser Carter Page as part of the FBI’s investigation of Russian election interference. The FBI has never publicly verified the contents of the dossier, and therefore critics of the ongoing Russia probe point to it as evidence that the investigation was compromised early on.

Unlike today, Cohen denied the McClatchy DC report in no uncertain terms. Also unlike today, Mueller didn’t bother to clear this up.

“I hear #Prague #CzechRepublic is beautiful in the summertime. I wouldn’t know as I have never been,” adding “#Mueller knows everything!” Cohen said.

Cohen even answered questions like this one: “Cut the shit, Michael. You think it’s cute to say you’ve never been to Prague when it could be a suburb of Prague or on the outskirts. Answer this question, smart guy: Have you ever been in the Czech Republic ever? For any reason? At any time? Ever?”

NPR has also had to walk back a report suggesting that there was smoking gun proof Donald Trump Jr.‘s testimony to Congress about the Moscow Project was not true.

He said there was “quite a bit of documentary evidence of this, whether those are emails, internal correspondence and witness interviews that they gathered before they spoke with Mr. Cohen at the special counsel. And then Mr. Cohen, during his many interviews with the special counsel, confirmed that he was directed to lie to Congress.”

BuzzFeed has responded to the statement from Mueller’s office by saying it is confident that what they reported was “accurate.”

“We are continuing to report and determine what the special counsel is disputing. We remain confident in the accuracy of our report,” BuzzFeed said.

I commend Bob Mueller’s office for correcting the BuzzFeed false story that Pres. Trump encouraged Cohen to lie. I ask the press to take heed that their hysterical desire to destroy this President has gone too far. They pursued this without critical analysis all day. #FAKENEWS

Trump Jr. has weighed in, as well.

Hey Adam, turns out it was Full of Schiff! https://t.co/01saPi8aaW 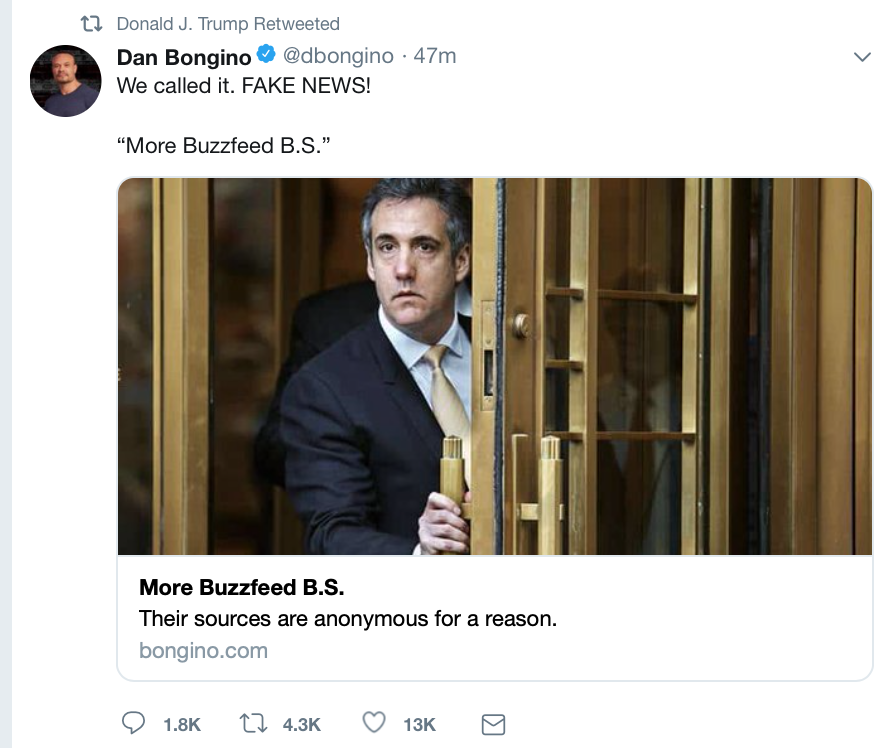