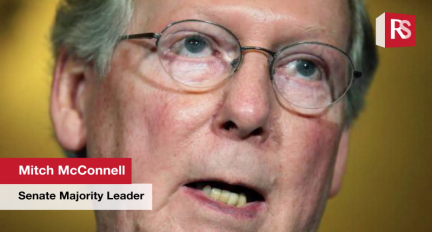 McConnell announced Tuesday that he does not plan to budge on the ongoing battle over the Supreme Court’s vacancy. Surprise, surprise! McConnell and Judiciary Committee Chairman Chuck Grassley visited President Obama at the White House to let their stance be known.

“We will reiterate that the American people will have a voice in the vacancy on the Supreme Court as they choose the next president, who in turn will nominate the next Supreme Court justice,” McConnell said on the Senate floor. However, as Senator Elizabeth Warren noted in a viral Facebook post, the American people made a choice when they overwhelmingly reelected President Obama.

Whether or not the American people should have a voice in filling the vacancy flies against precedent, the President’s Art. II power and the explicit language of the U.S. Constitution’s Appointments Clause which grants the President the right to nominate and appoint a justice to the Supreme Court with the “advice and consent” of the Senate.

“In other words, we will observe the ‘Biden Rule,” McConnell continued, referring to a speech that Vice President Joe Biden gave in 1992, in which he hypothesized over the idea of blocking a hypothetical nominee in President George H.W. Bush’s final year. That analogy, however, is misleading. Vice President Biden was hypothesizing, not actively blocking or refusing to consider a nominee. The speech took place in June of President Bush’s final year and addressed the possibility that a justice might step down so the President could appoint a justice before leaving office—political chicanery not sudden death. These are not simply distinctions without a difference.

While Americans await the results of the Super Tuesday election results, if businessman Donald Trump or former Secretary of State Hillary Clinton move closer to being their party’s general election nominees, McConnell may eat his words.