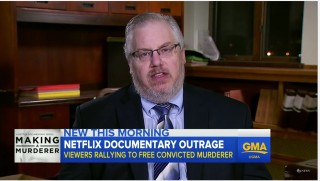 The disgraced former prosecutor Ken Kratz, who was ripped apart for his handling of Steven Avery and Brendan Dassey‘s cases in the hit Netflix documentary Making a Murderer, is apparently trying to cash in on his new found fame. Since the release of the documentary, Kratz said his private practice has basically dried up, and he’s received death threats. But, Kratz insists this new book deal is more than just about the money.

Kratz told a local television station he was writing the book because “the one voice forgotten to this point is Teresa Halbach.” Kratz has repeatedly spoken out since the release of the documentary on Dec. 18. He contends critical evidence was omitted from the docu-series including a bullet found in Avery’s garage with Halbach’s DNA on it.

The former Calumet County prosecutor resigned from his office in October 2010 after a shocking sexting scandal. He was found to have written very inappropriate texts to a 26-year-old domestic violence victim whose ex-boyfriend he was prosecuting. Others also made similar complaints.

Kratz was the lead independent prosecutor who put Avery and Dassey away for allegedly killing 25-year-old Teresa Halbach in Manitowoc County, Wisconsin. The documentarians raise questions about whether investigators planted evidence to obtain a conviction.