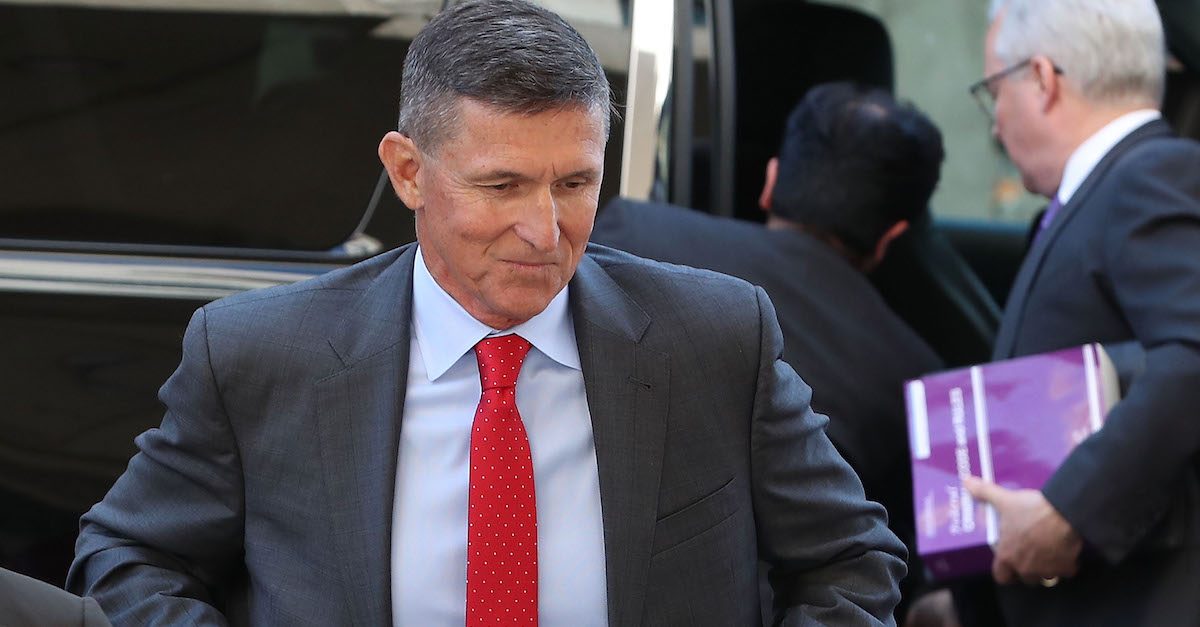 In a surprising turn of events for those who listened to the oral arguments in the matter, the D.C. Circuit Court of Appeals on Wednesday ruled that the judge presiding over Michael Flynn’s criminal trial cannot refuse to accept the Justice Department’s motion to dismiss the case against the president’s former National Security Advisor. The decision left legal experts “stunned,” with several arguing that the decision ordering the district court to grant Flynn’s writ of mandamus before Judge Emmet Sullivan even ruled on the motion to dismiss sets a problematic precedent for future cases.

The crux of the controversy surrounds Attorney General William Barr’s decision to direct subordinates to drop the case against Flynn despite the retired lieutenant general having twice pleaded guilty to lying to the FBI. While Flynn was awaiting sentencing, he got new lawyers and moved to withdraw his plea. Following the DOJ’s remarkable reversal, Judge Sullivan did not immediately concede the issue. Instead, citing language from the Federal Rules of Criminal Procedure requiring “leave of court” to dismiss a case at such a late stage, he appointed a former federal judge as amicus curiae to present arguments as to why the court should not grant the DOJ’s motion.

After Sullivan declined to immediately dismiss the case, Flynn’s legal team, led by conservative lawyer Sidney Powell, petitioned the D.C. Circuit for an emergency writ of mandamus. The 2-1 decision from the Circuit Court panel on Wednesday, penned by Trump-appointed judge Neomi Rao, reasoned that the scope of Rule 48’s “leave of court” requirement is not applicable where both the prosecution and the defendant agree on the motion in question.

Legal experts were swift to weigh in on the matter, with the vast majority saying that the decision can and very likely will be heard by the full slate of eleven (soon possibly to be twelve) active judges on the circuit.

“I am stunned DC Circuit has ordered Judge Sullivan to dismiss Flynn case. What happened after hearing when judges seemed so skeptical?” University of Michigan law professor and former U.S. Attorney Barbara McQuade said, referencing the poor reviews aimed at the DOJ and Flynn’s legal team following oral arguments on the issue earlier this month.

“Full court could and should review this decision en banc. Even if court is right on merits, mandamus is wrong avenue and creates bad precedent,” McQuade added.

I am stunned DC Circuit has ordered Judge Sullivan to dismiss #Flynn case. What happened after hearing when judges seemed so skeptical? Full court could and should review this decision en banc. Even if court is right on merits, mandamus is wrong avenue and creates bad precedent. https://t.co/eiptCU3NpY

Attorney Scott R. Anderson, a former U.S. diplomat and Senior Fellow with Columbia Law School’s National Security Law Program, pointed out that Rao’s decision hinged on a “presumption of regularity,” despite the highly unusual circumstances of the case and Flynn’s request.

“Rao’s heavy reliance on the “presumption of regularity” in this most irregular of cases—to the point of preempting inquiry by the trial judge as to how regular it actually is—strikes me as very unpersuasive,” he wrote. He also noted that the typically mild-mannered Judge Robert Wilkins’s “strongly worded dissent” may not bode well for Flynn’s chances with the full circuit panel.

Re: the Flynn decision, Rao's heavy reliance on the "presumption of regularity" in this most irregular of cases—to the point of preempting inquiry by the trial judge as to how regular it actually is—strikes me as very unpersuasive.https://t.co/Lu34U0LJUy pic.twitter.com/4YpDqEeOO6

As for Wilkins, this is a pretty strongly worded dissent for someone who is usually pretty genial and often strives to find (sometimes awkward) middle grounds on controversial issues.

Others quickly took stock of the D.C. Circuit’s ability, should it so choose, to rehear to case en banc.

As @steve_vladeck noted, any DC Circuit judge can ask that the full Court vote on whether to rehear the case en banc, even without Judge Sullivan requesting it. There’s a decent chance this happens given the unusual nature of the case and high bar for mandamus. Ht @davidrlurie https://t.co/YhpxVZiGWh

The D.C. Circuit currently has 11 active judges, any of whom (including a member of the original panel) is eligible to request a vote to have the full court rehear a panel decision.

It takes a majority—so 6 votes to take a case “en banc.”

University of North Carolina law professor Carissa Byrne Hessick also took issue with Rao’s opinion, specifically the notion that Judge Sullivan’s attempt to “scrutinize the reasoning and motives” of the DOJ would result in “irreparable harm” to the department, which Hessick said seemed “entirely inconsistent with the idea of democratic accountability.”

“The idea that the executive cannot be required to explain its decisions in open court strikes me as deeply troubling. Anyone who follows me knows that the only real check on prosecutorial power is political; if citizens disagree with prosecutors’ decisions, they can vote them out,” she wrote. “That view is incompatible with the idea of the branches checking and balancing one another.  And in light of how much power legislatures have given to modern prosecutors, I think this extreme separation view poses a significant threat to liberty in this country.”

In order for elections to serve as a remotely effective check on prosecutors, voters need information about the decisions that prosecutors make. And this section from the majority opinion seems entirely inconsistent with the idea of democratic accountability to me. pic.twitter.com/3bFED6o1qH

That view is incompatible with the idea of the branches checking and balancing one another. And in light of how much power legislatures have given to modern prosecutors, I think this extreme separation view poses a significant threat to liberty in this country.

Others, such as Neal Katyal, Joshua Geltzer, and Laurence Tribe, were dismayed by the “astonishing” decision.

This is a terribly weak, and profoundly antidemocratic, decision. The full DC Circuit should hear the case immediately. https://t.co/fELzUjYMp9

National security attorney Bradley P. Moss, on the other hand, sardonically said he “looked forward” to advising future presidents on the “new rules” concerning their conduct.

I am loving these rulings coming out of the Trump era to insulate the president from having people testify against him (McGahn) or limiting his ability to create “do not prosecute” lists for his friends (Flynn).

I look forward to advising future presidents on these new rules. https://t.co/sdgMsWKu6g

Seriously, this is going to be so much fun telling future presidents how they can conspire to ensure DOJ will never prosecute a close ally or friend and no one can do a thing to stop it absent impeachment (but Congress can’t sue to compel testimony) or winning the next election.