Bill Barr’s Former Boss: Trump AG ‘Does Not Believe in Core Principle’ of the Law, But ‘Does Regularly Lie’ 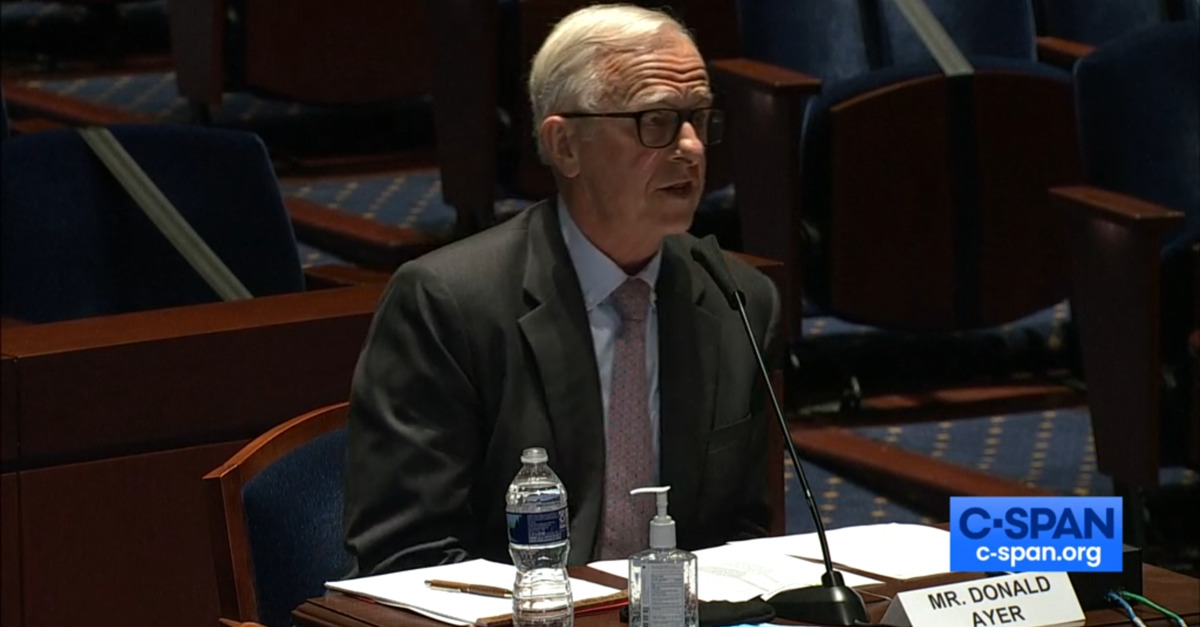 Working as an attorney in public and private practice over the years, Ayer served under both Republican and Democratic presidents in various highly-placed positions at the Department of Justice (DOJ) starting in 1977. He is currently a partner at elite law firm Jones Day.

“I believe that William Barr poses the greatest threat, in my lifetime, to our rule of law and to public trust in it,” Ayer said during his summary opening statement before the House Judiciary Committee. “That is because he does not believe in its core principle: that no person is above the law.”

Ayer previously called Barr “un-American,” writing that the attorney general should resign or be impeached.

As deputy attorney general from 1989 to 1990, Ayer was Barr’s boss when Barr headed the White House Office of Legal Counsel (OLC) and came away from that experience with a critical read on the 77th and 85th attorney general’s philosophy of the law and power.

“Instead, since taking office, [Barr] has worked to advance his lifelong conviction that the president should hold virtually autocratic powers,” Ayer continued. “That includes immunity from nearly all checks and balance and being able to accord special treatment to himself and his friends.”

Ayer originally came into government as part of a post-Watergate wave of would-be good government advocates and reformers. His testimony reflected a certain nostalgia for those formative years of his own worldview viz. political power and the law.

“The system that Barr is working to tear down was put in place in the aftermath of the Watergate scandals–which involved extensive government corruption and caused a widespread loss of trust,” Ayer explained. “After [Richard] Nixon resigned, President [Gerald] Ford’s attorney general Edward Levi acted swiftly to restore trust by supporting reforms to prevent such abuses.”

Running down a list of those reforms, Ayer mentioned the Foreign Intelligence Surveillance Act (FISA), the Inspector General Act, expansion of the Freedom of Information Act and the Whistleblower Protection Act as Levi’s lasting legacy.

Having DOJ operate under such guidelines, Ayer contended, was both a multi-generational cause and a cause that was necessary to DOJ’s role as an agency dedicated to “fairness and impartiality.” The current attorney general’s efforts threaten that regime, he said.

“Bill Barr’s service since last February has been a route and branch attack on Edward Levi’s vision and reforms–indeed the very idea that no person is above the law,” Ayer continued. “Barr has sought to give the president nearly unlimited powers by negating or overriding many independent processes that operate as important checks on executive branch action.”

Since replacing Jeff Sessions in the official role as attorney general, Barr’s words and actions have provided a rich store of controversy for the Trump administration. Ayer outlined a few such instances.

He referred to Barr’s “litigation, legal opinions and his own speeches” as efforts “to defeat meaningful oversight” by Congress and the federal courts–adding that the attorney general has also refused to testify before Congress “multiple times.”

The Roger Stone, Michael Flynn and John Bolton controversies were also cited as evidence that Barr routinely uses the “great powers of the Department of Justice to advance the president’s narrow political interests and gravely undermine constitutional rights and the functioning of our democracy.”

“Worst of all, I think, are his flamboyant media discussions of the facts supposedly unearthed by the specially-commissioned investigation he is personally conducting with the help of U.S. Attorney John Durham,” Ayer went on. “He has hinted repeatedly that indictments are likely.”

Calling Barr’s conduct “a textbook violation of Justice Manual” rules, Ayer said the “wrong is much worse” because Barr “is using a criminal investigation to produce fodder for the president’s campaign propaganda mill–which can have its effect even though it is false.”

Ayer also characterized Barr as a man guided by a mission to validate and vindicate President Donald Trump‘s Twitter missives.

As Republicans attempted to gavel the witness into submission near the end of his introductory summary, Ayer said that “Bill Barr does regularly lie.” Ayer reserved the last and most of his ire for the fact that Barr has a portrait of Levi hanging in his own office.