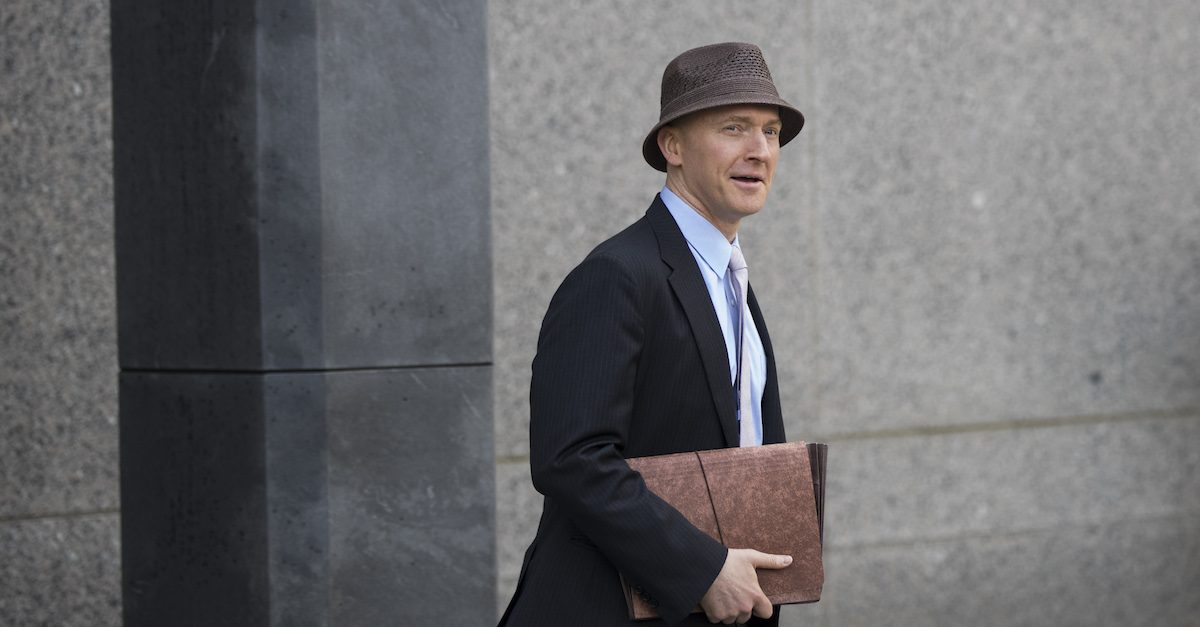 The U.S. Department of Justice is expected to turn over documents on Friday related to FISA [Foreign Intelligence Surveillance Act] warrants they obtained for former Trump campaign adviser Carter Page. The warrants have drawn an extreme amount of controversy, due to questions over the basis for the warrant application, and the apparent lack of full disclosure regarding where the underlying information came from.

The document release is in response to a Freedom of Information Act lawsuit filed by watchdog group Judicial Watch. In April, the DOJ told the court that they would turn over “certain FISA materials related to Carter Page” by July 20, 2018. Judicial Watch’s request was for:

Copies of all proposed and all final signed FISA applications submitted to the FISC [Foreign Intelligence Surveillance Court] relating to Russian interference in the 2016 election, allegations of collusion between people associated with the Trump campaign and Russia, and any known Trump associates regardless of context; Copies of all FISC responses to the above-mentioned applications in which the Court notified the FBI or Justice Department that it would not grant the proposed applications or recommended changes. If any such FISC responses were provided orally, rather than in writing, please provide copies of FBI or Justice Department records memorializing or otherwise referencing the relevant FISC responses; Copies of all FISC orders relating to the above mentioned applications, whether denying the applications and certifications, denying the orders, modifying the orders, granting the orders, or other types of orders.

The FBI obtained the initial warrant to conduct surveillance of Page–which was subsequently renewed three times–in October 2016, months after Page had left the campaign. At least some of the basis for the initial warrant appears to have been from information in the notorious dossier compiled by former British spy Christopher Steele on behalf of Fusion GPS, a research organization hired by the Clinton campaign. Republicans claimed that the FBI did not disclose that the work that yielded the information on Page was funded by the Clinton campaign. Democrats countered by saying that a footnote in the warrant application did note that it was the product of opposition research, but there was no further detail.

The extent to which the dossier was relied upon has been the subject of much debate. So far, it’s unknown what types of documents the Justice Department is turning over, but they could shed some light on this.

“Judicial Watch may finally get the infamous spy warrants the Obama administration and Deep State conspired with the Clinton campaign used to target then-candidate and now President Trump,” Judicial Watch President Tom Fitton said in a statement. “It took a  year, but the stonewall and cover-up, we hope, begins to end today.”

Of course, while the documents are set to be turned over on Friday, the information may not get out until later. Apparently, the DOJ is sending them out by FedEx.

Update: the government is mailing off the documents to all relevant FOIA requesters. Because of course they are…. https://t.co/2R4mtjsI8J

Law&Crime will provide details as they are learned.