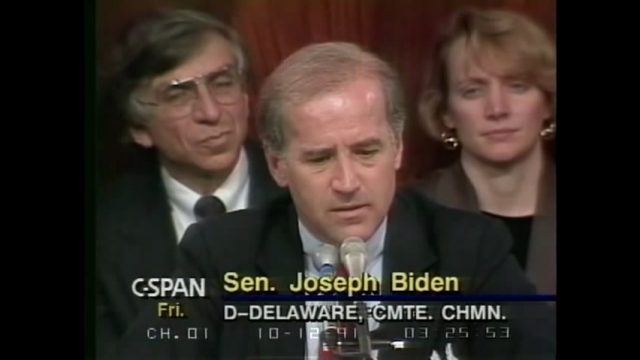 Joe Biden made a promise in the Senate men’s gym to keep Anita Hill‘s testimony before the Senate Judiciary Committee “very quick,” according to former U.S. Representative Pat Schroeder.

That promise was apparently made to then-Senator John Danforth of Missouri, a Republican. Danforth was Clarence Thomas‘ chief sponsor during Thomas’ 1991 Senate confirmation hearings.

In a wide-ranging interview with the Washington Post on November 16, Hill and five of her biggest congressional boosters–all former or current female Democratic politicians–sat down to reflect on the strenuous ordeal that Hill went through during those hearings.

Without fail, each of the six women heavily criticized the process–both explicitly and implicitly laying a great deal of the blame at Biden’s feet as he was the Senate Judiciary Committee chairman at the time.

Biden’s status among the center-left–and women’s rights advocates in particular—has deteriorated in recent years as his role in the character assassination of Anita Hill has been revisited.

To refresh: Hill claimed then-Supreme Court nominee Clarence Thomas sexually harassed her on numerous occasions, had repeatedly asked her out, discussed bestiality, group sex, and gang rape with her while also describing his own sexual prowess and self-avowedly impressive anatomy–all while Hill was under Thomas’ employ at the Department of Education and the Equal Employment Opportunity Commission.

Four witnesses were ready to testify on Hill’s behalf in front of the Senate Judiciary Committee–but a compromise was struck between that body and Senate Republicans that would only put Hill on the hot seat. Joe Biden struck that deal, but then it seemed that maybe even Hill wouldn’t have a chance to say her piece.

The delays and hesitation mounted, and then it seemed everything was just being rushed. Schroeder said:

We went to see Biden, because we were so frustrated by it. And he literally kind of pointed his finger and said, you don’t understand how important one’s word was in the Senate, that he had given his word to John Danforth in the men’s gym that this would be a very quick hearing, and he had to get it out before Columbus Day.

New York Representative Louise Slaughter noted, “We had a serious discussion that this had to happen.”

To which Schroeder replied, “It was really, really ugly.”