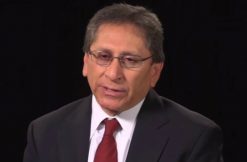 The man who sent Jodi Arias behind bars is now in trouble, too. Juan Martinez, a Deputy Maricopa County Attorney, has been put on probation for a year by Arizona’s Attorney Discipline Probable Cause Committee of the Arizona Supreme Court. He can still work, though.

The order wasn’t more specific than that. What did he do? When? How? That sort of thing. AZ Central reporter Michael Kiefer contacted the state bar, and learned that Martinez is in trouble for making “inappropriate statements” during certain legal proceedings. Nothing bad enough to reverse trial verdicts, but bad enough. However, Kiefer wasn’t really given anything more detailed than that. Well, we’ve reached out to the state bar (might as well keep digging), and we’ll update if we can find more information. [see Update below]

Martinez was given 10 days to appeal. We’ve reached out to him and the Maricopa County Attorney’s Office, and will see if he plans to fight this.

Accusations were first brought forward against him on December 22. The Arizona Attorneys for Criminal Justice, a group of defense lawyers, brought forward a 27-page letter, claiming Martinez performed misconduct during 11 cases (including the Arias one). For example: “misstating the law” to the jury; “misstating the evidence”; and implying “unethical conduct on the part of an expert witness” without actual evidence. It’s unclear how much of these specific allegations have anything to do with his actual probation.

Martinez became nationally famous for his aggressive prosecution of Jodi Arias. Arias was convicted in 2013 for the brutal killing of Travis Alexander. She said it was self-defense, but she’s now serving a life sentence in a Goodyear, Arizona prison.

Update – October 4, 5:57 p.m.: Arizona state bar replied to our requests for comment. They can’t talk about this specific case since Martinez is now appealing the decision. However, it was pointed out that lawyers who were admonished in informal hearings like Martinez’s were unlikely to face disbarment when they got a more formal appeal.