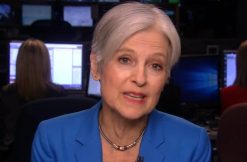 On Friday, Jill Stein’s lawyers demanded Attorney General Loretta Lynch “launch an investigation into the integrity of our nation’s election system generally, and our nation’s voting machines specifically, based on the information we discovered in the course of this representation.”

Their open letter comes after Stein’s recount efforts in swing-state Pennsylvania, and the formerly reliable blue states of Wisconsin and Michigan. GOP nominee and presidential nominee Donald Trump took each one in a close margin, and the only person who could directly benefit for a recount was Democratic candidate Hillary Clinton.

Ironically, Trump has made unsubstantiated claims that there were millions of fake votes, though his own lawyers even contradicted him by saying there’s no evidence that “fraud or mistake” tainted the election. But unlike him, Stein never made direct allegations about widespread, actual malfeasance. Insisting that she has nothing to do with Clinton (and even slighting her in several tweets), she instead argued that system is extremely vulnerable. This excerpt from the open letter is pretty representative of her and her team’s approach:

Why are 30% of Americans voting on machines that have no paper trail in light of the know vulnerabilities of any computerized voting system? Why is there insufficient funding to maintain voting machines in communities of color, resulting in widespread failure of machines on Election Day? Why are reliable, cost-effective audits not standard operating procedure? Why are voting machines connected to the internet notwithstanding the FBI Director’s sworn testimony?

They say Director James Comey falsely testified that no election machines are connected to the Internet. The letter even cited a recent report that Detroit precincts tabulated more votes than recorded voters.

Stein’s recount efforts have been mixed, at best. Michigan’s ended partway despite the Detroit report. A federal judge dismissed her demand in Pennsylvania. Only Wisconsin’s carried through to the end, with little change to the ballot count.

[Screengrab via The View]