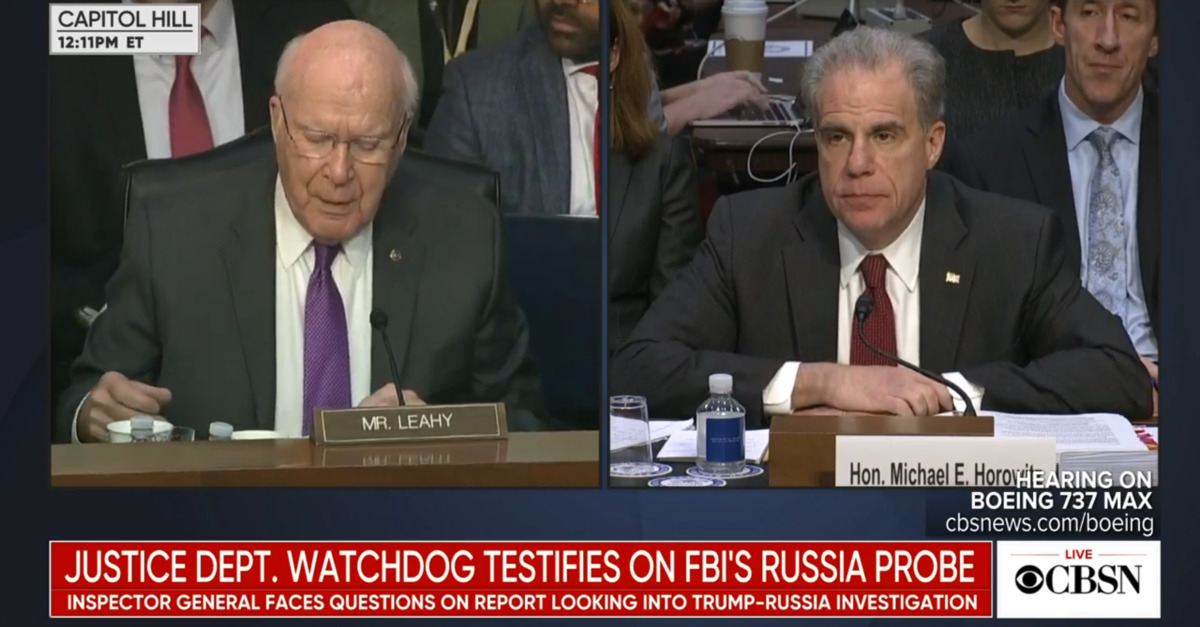 Department of Justice (DOJ) Inspector General (IG) Michael Horowitz said his office was investigating whether or not the Federal Bureau of Investigation (FBI) leaked information to beleaguered Trump personal attorney Rudy Giuliani in an effort to interfere with the 2016 presidential election.

Leahy asked about “highly sensitive leaks” received by Giuliani from the FBI’s New York field office leading up to election day in 2016. The Vermont senator recounted a prior exchange he had with former FBI director James Comey about how those leaks “likely contributed” to Comey’s election eve press conference where he announced the FBI had re-opened the email investigation into Hillary Clinton.

“I was concerned that there appeared to be in the media a number of stories that might have been based on communications reporters or non-reporters like Rudy Giuliani were having with people in the New York field office,” Comey testified at the time.

“Now, we know of a number of these leaks to Mr. Giuliani–which he then ran to the cameras and then actually bragged about talking about,” Leahy noted. “What can you tell us about the New York field office’s leaks to Rudolph Giuliani and others?”

To which Horowitz replied:

As we noted publicly last year in our report, we were very concerned about that. We put in the appendix charts showing all the different contacts. And subsequent to that report–and this continues to this day–we are investigating those contacts. We’ve issued a couple of public summaries so far about people we’ve found violated FBI policy. We have other investigations ongoing that when we conclude we will also post summaries of.

“What’s proving to be very hard is to prove the actual substance of the communications between the agents and the reporters or the individuals–as you might guess,” Horowitz continued. “But we can prove the contacts. And under FBI policy, you need authorization if you’re going to disclose information and have certain contacts.”

The Giuliani thread was picked up on by Sen. Dick Durbin (D-Illinois) who also asked about those leaks to the president’s personal attorney.

“Let me go back to the irrepressible, ever-present Rudy Giuliani,” Durbin said. “During the 2016 campaign, Rudy Giuliani–who was then a Trump campaign surrogate–bragged about having access to information about the investigation into Clinton’s emails,” Durbin said, noting that Giuliani said “a surprise was coming” and that he had expected the late game Comey announcement about the Clinton investigation.

“How can we be dealing with those kinds of statements, that long ago, and still have some resolution as to whether he was just bluffing or in fact he had moles in the New York Office?” Durbin asked. “Is there no investigation or has there been no investigation of this?”

Horowitz repeated his prior testimony that the “challenge of that investigation” was “proving who spoke to whom and when based on records at the FBI.”

“There’s rarely going to be substantive information we will get,” Horowitz explained, “but we will find out contacts.”

Durbin then asked whether Giuliani might currently be receiving information from law enforcement. Horowitz punted on that play.

“I’m not gonna speak to what we’ve learned or what we know about our ongoing investigations, and I’m not investigating matters related to the ongoing Ukraine issues that I think you’re referencing,” the inspector general replied.

Senator Harris: If true, do you agree that Giuliani’s scheme [to dig up political dirt abroad] is alarming?

Horowitz: I think anything like that would be very concerning. pic.twitter.com/oLlGRzP3F6