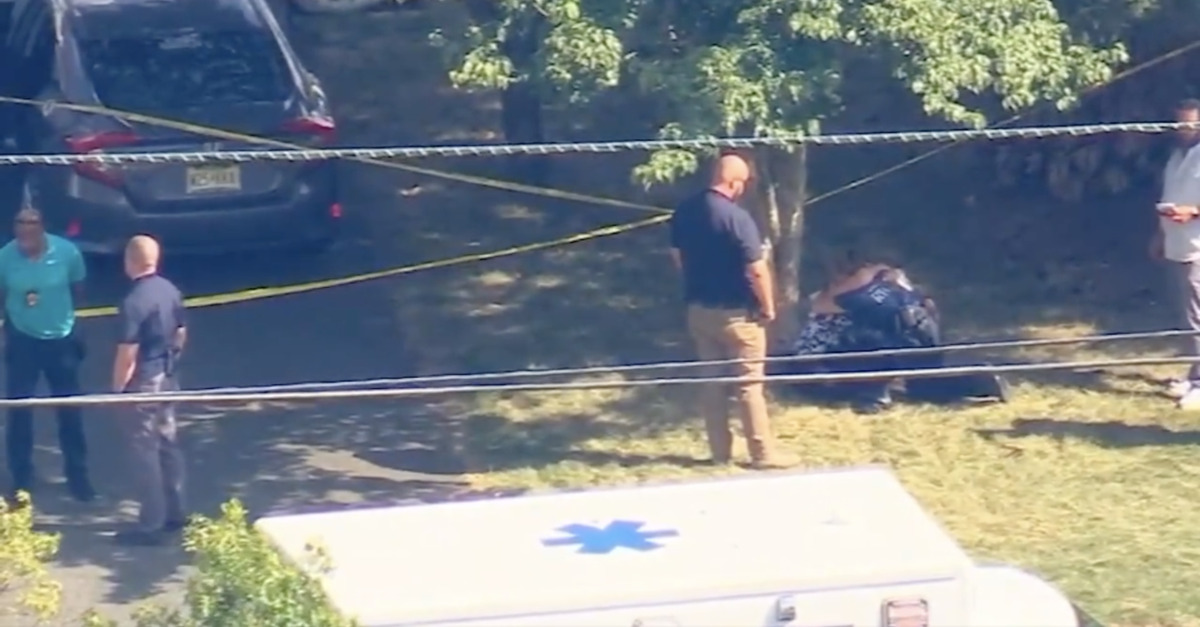 A local first responder in the Garden State embraces a distraught mother after her toddler died in a hot car.

In late August, a toddler was found dead in the backseat of a hot car in New Jersey. Authorities are now investigating the circumstances that led to the 2-year-old girl’s death.

On Aug. 30, 2022, Franklin Township Police responded to a call made just before 2:30 p.m. of a child in cardiac arrest at residence on Summerall Road, according to the Somerset County Prosecutor’s Office. Officers said they arrived to find a neighbor and “member of a local Fire Department administering CPR on the unresponsive child.”

Police then also took part in those life-saving efforts until “multiple” paramedics from various health organizations arrived, the DA’s office said in a Facebook post. But, ultimately all the work was done in vain and “the child was subsequently pronounced deceased at the scene.”

An autopsy has been scheduled that will determine the child’s exact cause and manner of death, Somerset County officials said.

The prosecutor’s office went on to note that a large task force was assembled to investigate the circumstances leading to the child’s death, including their own Major Crimes Unit, their own Crime Scene Investigation Unit, the Franklin Township Police Department, and the New Jersey Northern Regional Medical Examiner’s Office.

“Authorities have stated that results of the preliminary investigation have determined that the 2-year-old child had been left unattended in a vehicle,” the DA said. “Further investigation is on-going to determine the exact length of time the child was in the vehicle, and the circumstances surrounding the events leading to this incident.”

Local reporting, however, has provided some insight into how long the helpless girl was left alone in the scorching, greenhouse-like heat.

According to New York City-based flagship NBC station WNBC, citing “sources and neighbors,” the deceased child may have been left alone in the car, in the driveway of the home, for over seven hours. Franklin Township, N.J. is part of the New York City metropolitan area.

The TV station said neighbors they interviewed said the parents were likely unaware the child had been left in the car. They described in scene in which officers knocked on the door of the house and hearing the parents’ visceral reaction upon learning the fate of their girl.

“They were just screaming in pain and anguish,” one unidentified neighbor reportedly said. “She collapsed to the ground and he went to console her. They’re great parents. I’ve seen them be very loving and doting on their daughters.”

“I heard the dad screaming uncontrollably and then I heard the mom start wailing, really sobbing,” neighbor Treana Huntley told WABC. Huntley also appears to be a neighbor referenced in WNBC’s report.

“It was gut-wrenching, it almost made me want to break into tears as a mother,” she continued. “Just hearing that pain from another mother it was very hurtful to hear. I wouldn’t wish that on anybody.”

In the footage, the child’s mother can be seen on the ground near a tree in her front yard. A first responder, reportedly a police officer, could be seen attempting to console the woman. The two shared an embrace and rocked slowly back and forth.

“I’ve seen them,” neighbor Alex Krstevski told WABC of the family. “Yeah, I’ve seen them. Running around. They used to have sprinklers, you know, running around in the water, it’s really sad.”

While the Somerset County Prosecutor’s Office is currently looking into homicide charges, it is unclear if any will be filed.

According to Kids and Car Safety, the young girl’s passing marks the 22nd hot car death this year in the United States.