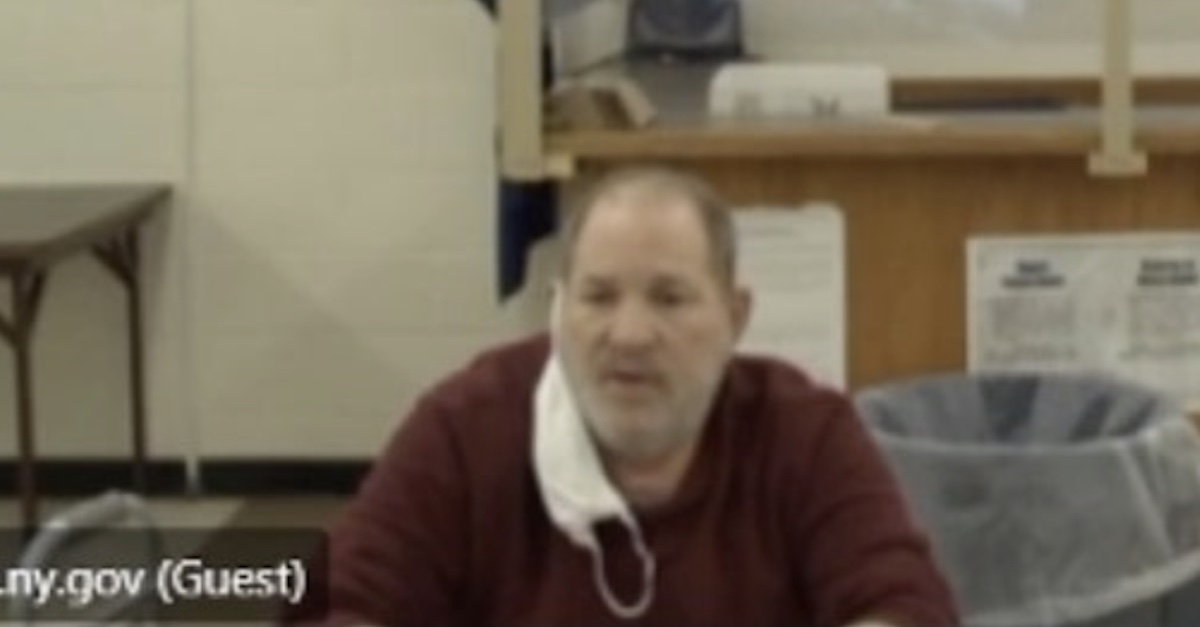 A federal judge rejected disgraced Hollywood producer and convicted rapist Harvey Weinstein’s effort to fight his long-delayed extradition to California, where he is facing additional rape and sexual assault charges. He will likely be extradited in July.

Piped into court virtually, Weinstein appeared via a video feed from Wende Correctional Facility. His attorney says his client was placed there to receive treatment at the medical center there. Effman argued that any jail facility in the Los Angeles area would not provide the treatment that he needs.

“The issue before this court relates to one, our request Mr. Weinstein remain where he is to get the treatment he’s now getting,” Effman said, adding that the legal reason is that the defective paperwork demands he remain.

“That’s what due process is about: following the rules,” he added.

A representative of the district attorney’s office scoffed at the notion that Weinstein could not find the medical care he needed in the City of Angels.

“It’s Los Angeles,” the prosecutor said. “It’s not some remote outpost that doesn’t have any medical care. It was have some of the best medical care in not only the country but in the world. So any of the medical issues can certainly be addressed.”

The prosecutor added that Weinstein has been an uncooperative patient who rejected treatment by an ophthalmologist, saying “he wasn’t psychologically ready for it.”

Judge Case said that Weinstein and his counsel can come back to court if he is not extradited promptly.

“If California doesn’t come to pick up Mr. Weinstein within a reasonable period of time, certainly, come back to see me, but they based on all of the circumstances and as I say, the paperwork and argument I’ve heard, I’ve respectfully denied your request,” he said.

In late April, the judge started a 30-day clock for Weinstein’s transfer to Los Angeles that could be stopped only by a challenge from the defendant or intervention by Gov. Andrew Cuomo (D). Weinstein’s lawyer Effman challenged the paperwork issued by Los Angeles prosecutors before the clock lapsed.

“This is a challenge to California’s request for temporary custody, based on our allegation that the paperwork filed by Los Angeles County does not comply with the mandates of the interstate agreement on detainers,” Effman told the Associated Press late last month by phone.

Effman reiterated that point during proceedings in Erie County on Tuesday.

Weinstein has been continuing his legal battles on both coasts of the United States. In New York, he is appealing his 23-year sentence on one count of a criminal sexual act in the first degree against former production assistant Mimi Haleyi and another for rape in the third degree against former actress Jessica Mann. He will simultaneous appeal that sentence in New York while fending off other charges on the West Coast.

“This is a brand new day,” Weinstein’s lawyer Effman told a judge on April 30. “As I said, Groundhog Day is started again.”

In Los Angeles, Weinstein will await trial on accusations that he allegedly sexually assaulted a woman at Beverly Hills hotel room on May 11, 2010. The other West Coast charges against Weinstein include forcible rape, forcible oral copulation, sexual penetration by use of force, and sexual battery by restraint, stemming from allegations that he attacked two women in 2013.