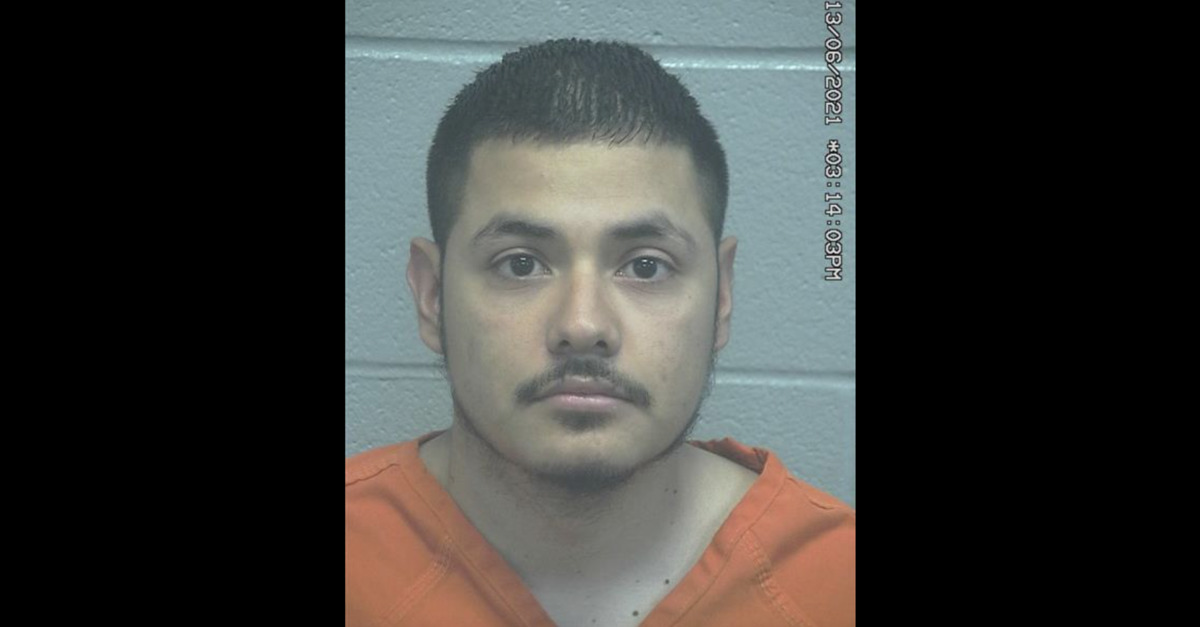 A Texas man has been arrested for allegedly running over his pregnant wife with his truck and killing their unborn child.

Christopher Gonzales, 26, stands accused of murder in the first degree and second-degree aggravated assault with a deadly weapon.

The incident occurred in late March. Midland County Sheriff’s Office deputies originally responded to a medical call about a woman who had fallen off of her husband’s truck and needed help. Eight months pregnant at the time, Yvette Natividad was airlifted to a hospital in Lubbock, Texas over 100 miles away. Midland was originally founded as–and draws its name from being–the halfway point between Fort Worth and El Paso on the old Texas and Pacific Railroad line in 1881.

Natividad was immediately placed in the intensive care unit and an emergency caesarian section operation was performed. The nearly-full term child died from the injuries sustained in the alleged attack.

According to documents obtained by Law&Crime, the 22-year-old expectant mother did fall off the truck–but it was during a heated argument on the side of the road. And what happened next allegedly wasn’t an accident.

Police say she attempted to get inside the truck by stepping on driver’s side the step rail. That’s when Gonzales allegedly gunned the vehicle, causing his wife to fall to the ground.

An affidavit obtained by Law&Crime relays her side of the story:

On April 23rd, 2021 an interview was conducted at The Midland County Sheriff’s Office of Victim, Yvette Melero Natividad, H/F, DOB 3/2/1999. During the interview, Yvette disclosed that she and Suspect Gonzales had been arguing and were near Suspect Gonzales’s Sister’s House when she stepped up onto the Suspect Gonzales’s step rail of his 1997 Ford F-250 Pick Up. Victim Natividad states that she was attempting to get Suspect Gonzales’s attention to talk when Suspect Gonzales pulled away causing her to loose [sic] her balance, fall to the ground underneath the Truck and as a result was ran over.

The defendant later allegedly admitted to running his wife over after that during an early April interview with authorities.

In an interview with Midland County Sheriff’s deputies, Gonzales allegedly confessed to knowing that his wife was on the side of the truck when he drove off. According to police documents, the suspect also allegedly confessed to feeling a “bump” and hearing a “Scream” as he knowingly ran over his pregnant wife.

Gonzales was arrested and charged on June 13. He is currently being held at the Midland County Detention Center on $150,000 bond.

The murder charge is in relation to the death of the unborn child; the aggravated assault charge is due to the crushing of the woman’s pelvis and hips. If convicted as charged, Gonzales could be put to death by the state. Texas has long been an eager user of capital punishment.

Under Texas law, motor vehicles are often classified as deadly weapons when allegedly used to cause grievous injury.

Attorney information was not immediately available as of Tuesday and Gonzales has yet to be arraigned. His case status is currently “pending disposition.” The defendant is currently assigned to a justice of the peace division of the Midland County District Court System, according to jail records.

Criminal affidavits and warrants in the case are available below: