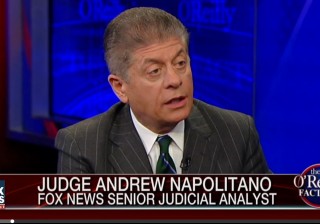 Fox’s Judge Andrew Napolitano is not one to hold back when it comes to Hillary Clinton and the private email controversy. On Fox’s “The O’Reilly Factor” Napolitano went a step even further saying “the evidence of her guilt is overwhelming.” He also claims that he is ‘100-percent certain’ that the FBI has enough to indict and convict her.

“The FBI is at the very end of its investigation, it is in the second to last phase, it has invited Mrs. Clinton’s five closest advisers, former and present .. in for interviews. They have hired the same lawyer and they have agreed to go in,” Napolitano said. He said he doesn’t know if the aides have actually gone in but the invitation was issued about 2 1/2 weeks ago.

Clinton is also expected to face questions from investigators. “It is a foolish thing to do legally, but she may need to do it (submit to questions) politically,” Napolitano said. “She wants to score points that she has nothing to hide from the FBI.”  O’Reilly confronted Napolitano about “convicting” Clinton on television. Napolitano stuck by his claims.

Napolitano acknowledged that the “FBI knows a lot more” about the investigation than he does, and admits she may not end up being charged because of the politically charged atmosphere surrounding this case. The FBI agents are working to determine whether Clinton or her aides knowingly or negligently discussed classified material over the private email server. LawNewz.com’s founder, Dan Abrams, believes, based on what we know today, there is not enough to indict her. But, as my colleague, Chris White, pointed out, FBI director James Comey has kept the details of the investigation under wraps.