Elie Honig: Trump 'Lashing Out' May Be Criminal | Law & Crime

Former Federal Prosecutor: Trump’s ‘Lashing Out’ at Matthew Whitaker May Have Been Obstruction 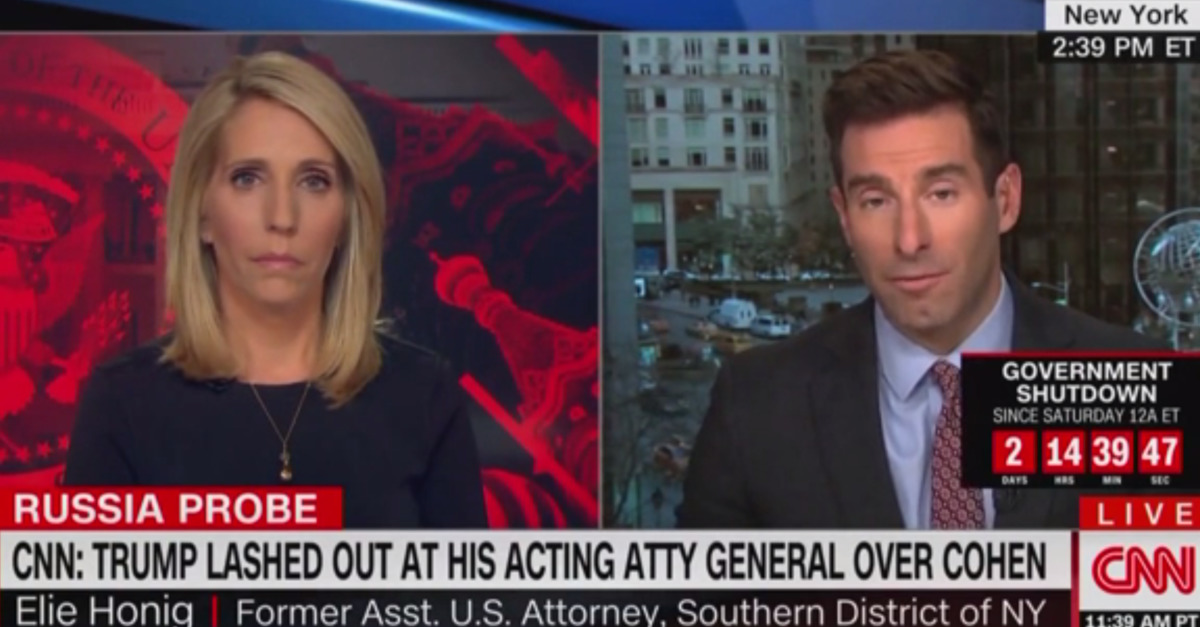 Over the weekend, CNN reported that Trump has taken to railing against the Southern District of New York’s (SDNY) case against his former attorney and “fixer” Michael Cohen–and making his extreme displeasure known to Whitaker. This report, however, took pains to note that President Trump isn’t accused of directing Whitaker to take any specific action. In any event, Trump dismissed the report as “fake news.”

I never “lashed out” at the Acting Attorney General of the U.S., a man for whom I have great respect. This is a made up story, one of many, by the Fake News Media!

Bash asked Honig whether “having a conservation with an attorney general” about what the SDNY has “done with Michael Cohen” was a good idea. To which Honig replied:

It doesn’t matter if the president lashed out or if he asked really nicely. The bottom line is: it’s patently obvious what his message was to Matthew Whitaker, which was, “Get the Southern District off my back, you need to make sure the Southern District doesn’t do things in the future that reflect poorly on me.” Maybe he didn’t say, “Make sure they don’t,” but if he said, “I’m angry that this happened,” any boss giving any subordinate that message is entirely clear what he means. He means, “[D]on’t let this happen again.”

In comments to Law&Crime, Honig elaborated on the theory.

“The President has now denied that he ‘lashed out’ at Whitaker but he conspicuously does not deny anything else about the reporting,” Honig said via email, “most importantly the fact that he spoke with Whitaker and expressed some manner of displeasure about the SDNY’s work on the Cohen case (including the implication of the President by Cohen and the SDNY, on the record, in campaign finance crimes). No matter what tone of voice the President used, his message to Whitaker was quite clear–back the SDNY down and make sure they don’t do anything that could hurt me. Right there you have evidence of a corrupt intent to hinder a law enforcement investigation and to prevent that investigation from running its full and true course, for corrupt self-preservationist purposes.”

Honig also noted that President Trump’s latest apparent attempt to influence an ongoing investigation was more of the same:

Combine that with all the other instances we’ve seen of the President trying to derail or sidetrack this or related investigations–trying to get [James] Comey to drop the investigation on Flynn, firing Comey, berating Sessions over his recusal, tweets attacking cooperators (calling Cohen a rat), trying to fire Mueller (which [Don] McGahn talked him out of)–and it paints a compelling picture. I’ve charged obstruction cases involving a defendant who tried to get one witness to falsify one aspect of his statement to the FBI–here we have a president trying to burn down the entire investigation.

On Saturday, Rocah was asked a substantially similar question while appearing on MSNBC.

“Whether he actually said the words, you know, ‘stop this investigation, shut it down,’ is not really important,” Rocah told host Alex Witt. “That doesn’t dictate the results here. This to me is–just based on what we already know–a pretty clear, raw, blatant attempt at obstruction. Now whether it actually succeeded or not depends in part on what Whitaker’s response was.”

Rocah continued, noting that it was largely up to Whitaker at that point.

“Did [Whitaker], you know, go and talk to someone–try to or talk to someone in the Southern District based on Trump’s quote ‘lashing out’?” Rocah asked out loud. “Trump didn’t need to say the words ‘shut it down.’ If the president of the United States is expressing, you know, such extreme displeasure that it is described as ‘lashing out’ about the fact that his name, his conduct frankly, has been part of the Southern District investigation, that’s really the same thing, without saying those words.”