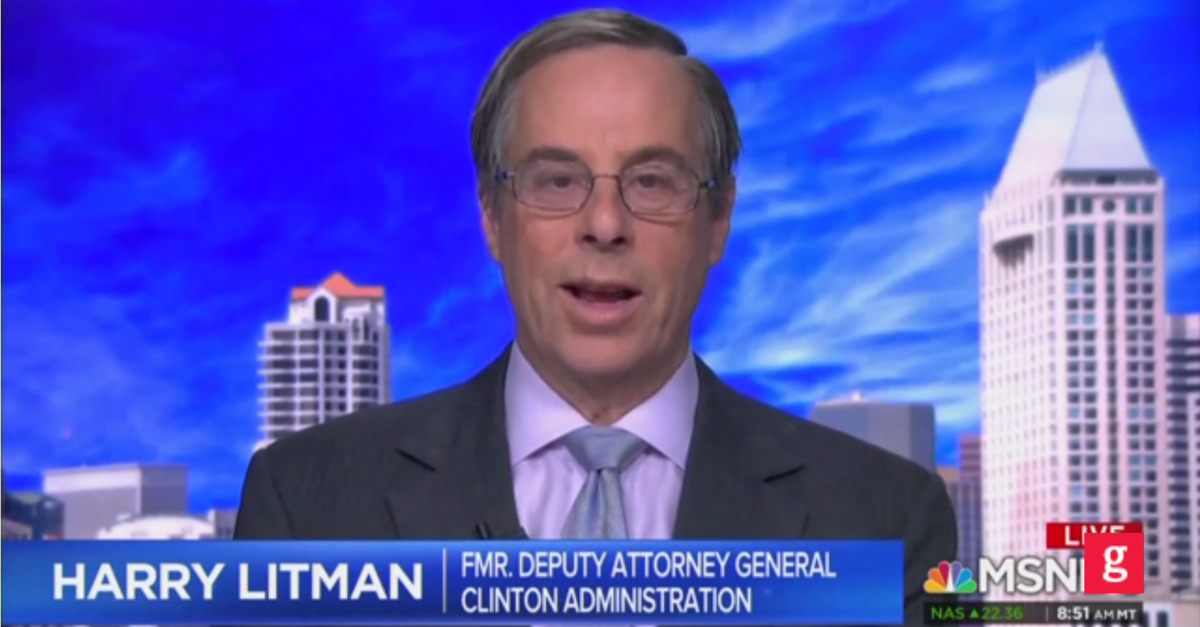 During a Monday morning appearance on MSNBC Live with Hallie Jackson, Litman was asked to opine about recent comments by Mueller prosecutor Andrew Weissmann in a heavily redacted transcript from one of Manafort’s recent court hearings in Washington. D.C.

As Law&Crime previously reported, in that transcript Weissman honed in on what the court termed Manafort’s “lies of consequence,” which allegedly concern  an August 2016 meeting between Manafort and Russian political operative Konstantin Kilimnik–who is believed to have ties to Russian intelligence agencies.

“This is the first time where we’ve really seen [Mueller and his team] try to link Manafort to what they describe as the ‘core of the investigation’ and our understanding is that the conversations in question started during the campaign while Paul Manafort was still on the campaign,” Vogel noted. “[Those comments] appear to be dealing with this Russian associate of his, Konstantin Kilimnik, and Kilimnik’s plan for a sort of brokered negotiation peace deal between Ukraine and Russia.”

Vogel then theorized a possible bit of connective tissue between Kilimnik’s proposed peace deal and the Trump 2016 campaign.

“If you’re looking for the quid pro quo, you see the quid, you see the work by Russia, and the meddling in the election. What is the quo?” Vogel asked out loud. “You have at least the potential of building a theory around the idea that the quo would be a peace deal that would favor Russia and potentially–potentially–result in the lifting of U.S. sanctions against Russia which, of course, is the huge–biggest sort of driving foreign policy objective of the Russians.”

The show’s host then noted that Weissmann, in the redacted transcript, just after discussing the “core” or “heart” of the Russia investigation, dialed back a bit during that sealed hearing and said “that’s about as far as I can go.”

“Why did you key in on that piece?” Jackson asked Litman.

To which Litman replied:

When Weissmann says, “that’s about as far as I can go,” you know that he’s at a certain radioactive core that he can’t reveal–even in a closed-door hearing. And what he is proposing, even though it is heavily redacted, as Ken says, seems a kind of grand bargain involving not simply a sweetheart deal for Russia and Ukraine, but the lifting of sanctions, which Putin dearly wanted. And the glue that holds it all together on the U.S. side are the personal financial interests of the actors. Manafort to make money from [former President of Ukraine, Viktor] Yanukovych, Flynn to do something with the sanctions, and Trump to build his big crown jewel of the Trump Tower.

“So, it really seems to be getting toward quite a grand scheme where officials are feathering their nests at the expense of U.S. national interests and doing Russia’s bidding,” Litman continued, “in a sense.”