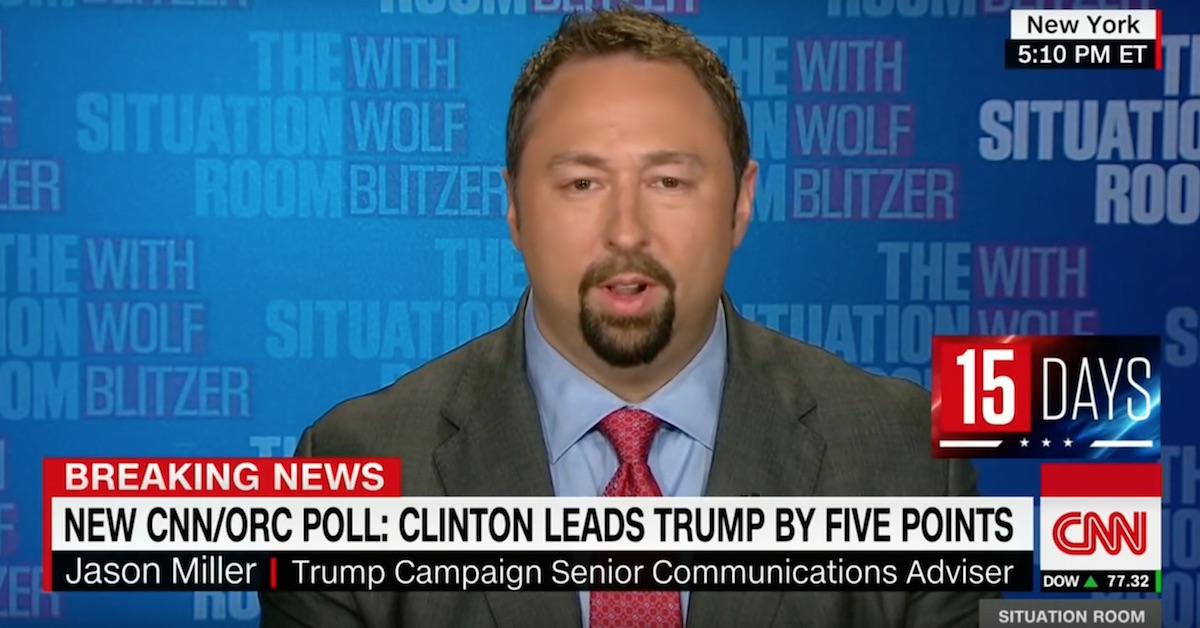 Was former Trump campaign staffer Jason Miller taking cues from controversial Supreme Court appointee Brett Kavanaugh on how to respond to sexual misconduct allegations (and worse) when filing a $100 million defamation lawsuit against Gizmodo Media Group? It sure looks, at a minimum, like Miller took some notes.

In case you’ve missed it, Miller, also a former CNN contributor, filed a lawsuit against Gizmodo Media Group for a story it ran on one of its websites, Splinter.com. Miller was accused of all manner of horrors, like drugging a woman with an abortion pill without her consent.

Miller had already been accused by former Trump campaign aide (and former Mediaite columnist) A.J. Delgado of carrying on an affair with her, fathering a child with her and subjecting her to physical and sexual abuse. She claimed that Miller demanded she get an abortion. Miller’s wife was reportedly pregnant at the time. The story published in Splinter News relayed a separate allegation, that Miller slipped an unidentified woman an abortion pill in a smoothie that ended up endangering her life and tried to get her to sign a non-disclosure agreement.

Miller said “none of these accusations are true” and that the Jane Doe “verified under oath that these events never happened.”

Miller has responded to the rest of it by categorically denying that any of it has occurred, but a lot of the language in the lawsuit and the arguments in it are noticeably similar to Kavanaugh’s responses before the Senate Judiciary Committee. Could this be a template of sorts on #MeToo, heading forward?

Life Ruined by No Corroborating Evidence

Miller began by saying that his life was effectively over now that the Splinter story is out there and millions of readers have already prejudged him as a “murderer.”

It seems similar to when Kavanaugh lamented that a Democratic senator on the Senate Judiciary Committee publicly referred to him “evil” after the press had published stories about accusations made by Dr. Christine Blasey Ford, Deborah Ramirez and Julie Swetnick.

“It’s said that those who supported me were, quote, ‘complicit in evil,'” Kavanaugh said. Miller had a similar response.

“The truth rarely matters in the court of public opinion, where the fallout from the Defendants’ baseless accusations about Miller was immediate and devastating: Miller was labeled a ‘murderer,'” the lawsuit reads. “He lost his job on CNN, he is being harassed and threatened online, he and his family are being shunned in their community, and his personal, professional and family life have been permanently scarred all without a shred of proof or corroborating evidence.”

This Could Happen to Anyone

The lawsuit suggested that the “defamatory assault” on Miller is something that the public should care about because it could happen to anyone. This brought to mind Kavanaugh pleading with the public and U.S. senators to judge him “by the standard that you would want applied to your father, your husband, your brother or your son.”

“The maliciousness of the defamatory assault on Miller and the ease with which it was executed is frightening because what happened to Miller could happen to anyone,” the Miller suit continued.

My Life Has Been Destroyed

Kavanaugh memorably said during hearings that he loved teaching law and coaching basketball, “but thanks to what some of you on this side of the committee have unleashed,” he said he may never be able to do either again.

Miller’s lawsuit covers this as well, saying that Splinter’s “false allegations” have put businesses in the position of having to permanently cut ties with him.

“There are people who think the First Amendment gives them free reign to publicly level false allegations which, once posted online and on social media, result in knee-jerk reactions, scorn and ridicule, assumptions of guilt in the court of public opinion, and immediate terminations of employment because businesses are understandably fearful of being associated with people merely accused of engaging in misconduct society deplores.”

A ‘Nefarious Plot’ Is Afoot (Aided by the Press)

Finally, who could forget Kavanaugh’s outburst that all of what was happening amounted to “revenge on behalf of the Clintons”?

Miller’s lawsuit liberally used to the word “plot” to explain the allegations against him and suggested that politics (of members of the press or otherwise) were very much a factor in his downfall.

The suit names journalist Yashar Ali and alleges Ali and A.J. Delgado were responsible for the “fabrication of abuse allegations.” The lawsuit noticeably mentions that Ali is a “former Democratic fundraiser, political operative, and opposition researcher who worked on Hillary Clinton’s 2008 presidential campaign, and also reportedly worked as a federal lobbyist and gave significant sums to Democratic candidates.”

“It is unclear why [Ali] injected himself into that dispute and decided to act as an investigator for Delgado while feeding her information to fuel her war against Miller,” the lawsuit says.

Miller v Gizmodo by on Scribd