‘Female Physicians Do Not Work as Hard’; Texas Doctor Under Fire For Controversial Comments 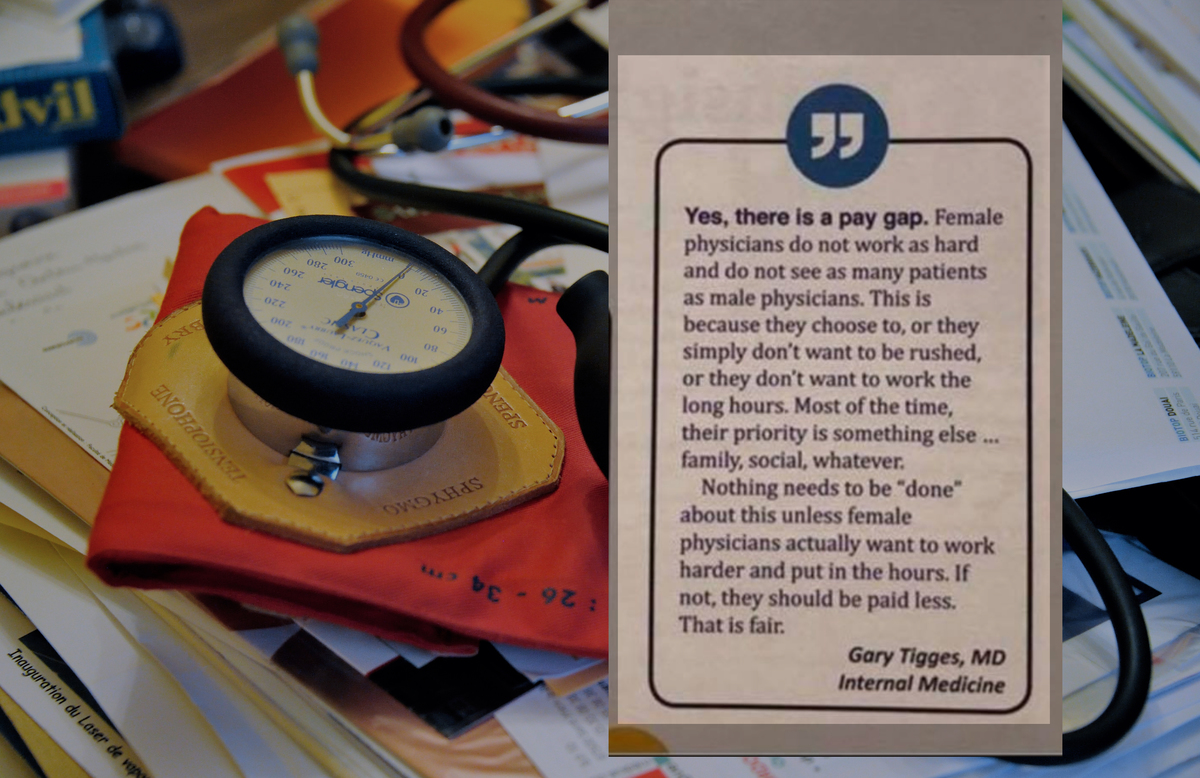 A doctor from the North Texas suburb of Plano is under fire for his scorching hot take on gender pay disparities within medicine which went viral after being shared by outraged users on social media.

The comments from Dr. Gary Tigges were originally featured in this month’s “Women in Medicine Issue” of the Dallas Medical Journal–which is published by the Dallas County Medical Society.

Various doctors were profiled in the issue and some were asked to weigh in on the gender pay gap–a still extant gulf between male and female take-home pay across most U.S. industries for the same or similar work despite various legislative attempts to equalize salaries and wages between women and men over the years. A feature on the pay gap took into account eight “big and bright ideas.”

The article’s introduction notes, “We asked our physicians if they believe a pay gap exists between male and female physicians. If so, what is the cause? What steps can physicians take as individuals and as a community to address this?”

To which Tigges responded:

Yes, there is a pay gap. Female physicians do not work as hard and do not see as many patients as male physicians. This is because they chose to, or they simply don’t want to be rushed, or they don’t want to work the long hours. Most of the time, their priority is something else … family, social, whatever. Nothing needs to be “done” about this unless female physicians actually want to work harder and put in the hours. If not, they should be paid less. That is fair.

A snippet of the article singling out Tigges’ response quickly spread various social media platforms, according to the Dallas Morning News.

Thank you for publicly displaying your disgusting thoughts on the value of women physicians in the workplace. Is this how you feel about your female patients too? That they don’t do enough? Or don’t try or work as hard because of social or personal commitments? There is a pay gap because there is gender inequity and inequality which is wrong and can not be justified in any way. The truth of it is that all of us (men and women alike) have commitments which for most include children and family members whom we care for which you have lump summed as “family, social, whatever..”. In fact, involved parents and family members (both men and women) are working extremely hard…

Sabry-Elnaggar’s criticism continued, “Women physicians have been proven to put their skills into their work with better mortality outcomes and they continue to do this despite the discrimination more than 80% of them face at work. So please educate yourself beyond your medical degree about what your colleagues are doing…and how their presence is important to the healthcare team and to their patients. And if you are going to make outrageous claims please do so with data and not opinions.

In response to the controversy, Dr. Tigges said his comments were being interpreted out of their proper context but that he also did not stand by them as they appeared in the publication. While speaking with the Morning News, Tigges noted that his take was not a normative statement but rather one informed by studies showing that female physicians often earn less because they take on fewer clients than men due to other obligations.

Tigges also clarified that he didn’t think women should be paid less for equal work. He said, “My response sounds terrible and horrible and doesn’t reflect what I was really trying to say. I’m not saying female physicians should be paid less, but they earn less because of other factors. Women might take longer with their patients, and that’s a great thing, but then their pay is less. That’s something we have to deal with every day; you have to work out that balance. Every physician wrangles with that. But it was not my intention to say female physicians are lazy or don’t work as hard.”