Day Before It’s Set to Go into Effect, Judge Screws With Trump Over His Travel Ban Again | Law & Crime

Day Before It’s Set to Go into Effect, Judge Screws With Trump Over His Travel Ban Again 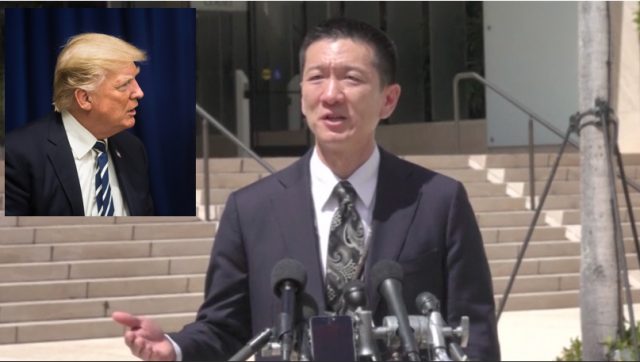 President Donald Trump‘s third version of the controversial travel ban has been struck down–except for the provisions against Venezuela and North Korea.

The ruling issued by Judge Derrick K. Watson will allow travelers from the six Muslim-majority countries included in the ban.

For those counting; that’s Syrians, Libyans, Iranians, Yemenis, Chadians, and Somalians in. North Koreans and Venezuelans out.

Effectively, Watson has turned Trump’s ban on travelers from Muslim-majority countries into a civics-cum-Constitutional law lesson on not targeting Muslims. And, by allowing the ban to remain in effect for Venezuelans and North Koreans, Watson is basically needling the president at the same time. In other words, Watson has publicly gutted President Trump’s intent here.

Prior to enacting and crafting the ban as a travel-oriented restriction on entry, then-candidate Trump referred to it as a ban on Muslims. The eventual legal form of the travel ban–which mostly targets Muslim-majority countries–is frequently disparaged by commentators as a “Muslim ban” issued under the pretense of a travel ban.

Apparently Judge Watson remembers candidate Trump’s words on the campaign trail and agrees with those who believe the ban is engineered to target Muslims. In his ruling issued just hours before the ban was to go into effect, he wrote:

[The latest ban] suffers from precisely the same maladies as its predecessor: it lacks sufficient findings that the entry of more than 150 million nationals from six specified countries would be ‘detrimental to the interests of the United States.’

Watson also noted that the travel ban, “plainly discriminates based on nationality.” This, Watson said, was a clear violation of federal law and, “the founding principles of this Nation.”

No stranger to the Trump administration’s travel/Muslim ban or its associated political theatrics, Watson has ruled on prior versions of the ban with similar judicial furor in the past.

In fact, this is the second time Watson has stopped Trump’s travel ban from going into effect.

In the initial restraining order, Watson wrote, “[A] reasonable, objective observer…would conclude that the Executive Order was issued with a purpose to disfavor a particular religion.”

Watson is also responsible for tossing a few gallons of cold water on the travel ban once it was allowed to go forward. After the Supreme Court partially reinstated the ban, Watson famously expanded the terms of “close familial relationships” to include grandparents, grandchildren, in-laws, aunts, uncles, nieces, nephews, and cousins.