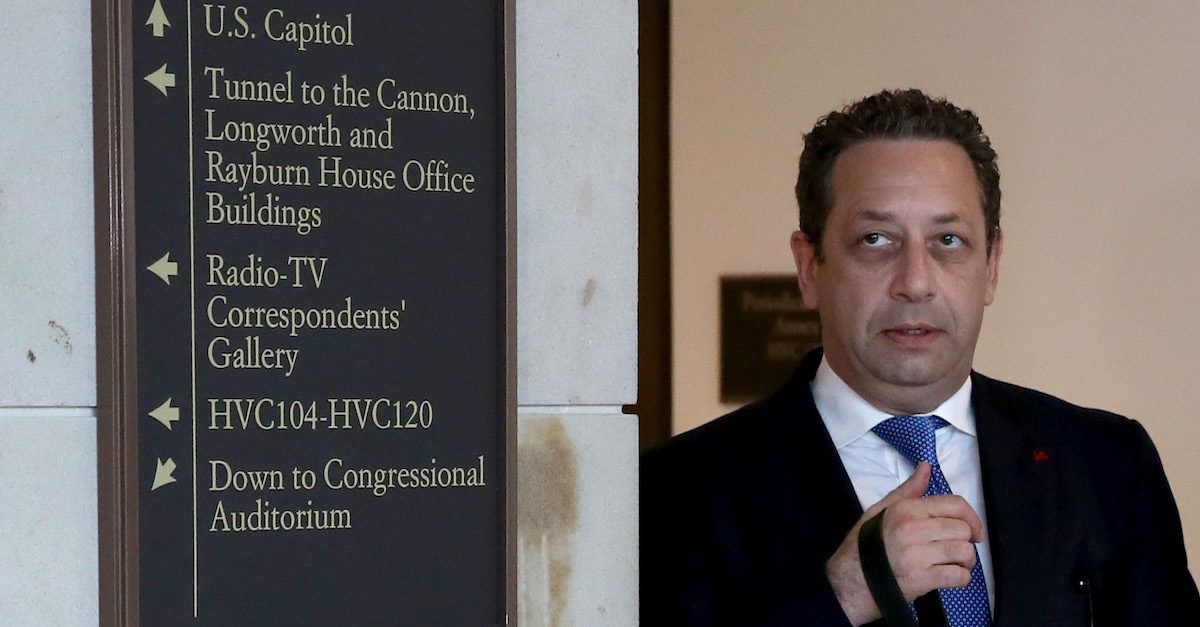 Felix Sater, former business associate of U.S. President Donald Trump, arrives for testimony before the House Select Intelligence Committee July 9, 2019 in Washington, DC. Sater was the chief negotiator in the unsuccessful effort to build a Trump Tower in Moscow.

“In this case, Kazakhstan’s largest city and a Kazakhstani bank seek to recover millions of dollars in stolen funds from those who allegedly helped the culprits launder them,” U.S. District Judge Alison Nathan summarized in a 25-page opinion dismissing only two counts of a five-count complaint. “Felix Sater—the alleged ringleader of the money-laundering operation—along with his associate Daniel Ridloff and several business entities they control, move to dismiss.”

Like Sater, Ridloff was also formerly associated with the Trump Organization. The lawsuit stems from allegations of the systematic looting of Kazakhstan’s largest city Almaty and its bank in 2009.

“The Court emphasizes that the Kazakh entities will need to adduce evidence showing the Sater defendants’ deceptive conduct and their justifiable reliance on that conduct in significantly greater detail to meet their burdens of production and of proof as the case progresses,” Nathan wrote. “However, at this stage, the Court concludes that it is not clear on the face of the complaint that their claims are untimely, and so declines to dismiss any claims on that basis.”

Almaty’s attorney Matthew Schwartz, from the firm Boies Schiller Flexner LLP, expressed his gratitude to the judge for today’s ruling.

“BTA Bank and the City of Almaty are committed to holding Mukhtar Ablyazov and his co-conspirators responsible for the theft and laundering of billions of dollars, and look forward to proving their case before a jury of New Yorkers,” Schwartz said.

Sater’s counsel Jill Levi, from the firm Todd & Levi, LLP, emphasized that the ruling itself does not contain explicit references to Trump properties.

“We also believe that the remaining claims are teetering on dismissal based upon, among other things, good statute of limitations defenses,” Levi told Law&Crime in an email.

Levi also noted that the judge called the allegations of deceptive conduct “thin.”

The lawsuit that the ruling advances, however, accuses Sater of helping the Almaty mayor’s son Ilyas Khrapunov launder stolen funds in at least five schemes throughout the United States, including through Trump Soho.

“Sater not only met with Ilyas Khrapunov in Trump Tower to discuss laundering the stolen funds, but he also personally arranged meetings between Ilyas and Donald J. Trump to discuss possible investments,” the first amended complaint against Sater states.

According to the lawsuit, there was also a proposal to funnel money through Trump Tower Moscow, before that plan fell apart around the time of the 2016 presidential election.

“Among other proposed investments, Sater conspired with Ilyas to invest the stolen funds to develop a Trump Tower project in Russia, which Sater has claimed would have been a ‘high-rise, high-end development that could make a significant amount of money,'” the lawsuit states.

The plaintiffs do not accuse Trump of wrongdoing.

“The knowing receipt of stolen funds in furtherance of a money-laundering scheme, in the circumstances of this case, amounts to a sufficiently close connection to support a claim for unjust enrichment,” the ruling states. “The Court therefore concludes that the Kazakh entities have stated such a claim.”

Judge Nathan dismissed two counts of fraud and unlawful means conspiracy, but not others alleging unjust enrichment, conversion and money had and received.