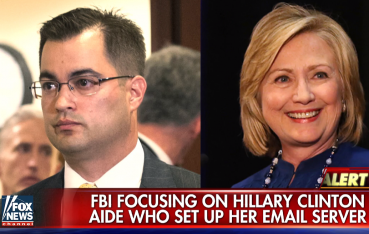 A potential bombshell report in the Washington Post late Wednesday evening says the Department of Justice has granted immunity to the former State Department staffer who set up Hillary Clinton’s private e-mail server as part of the ongoing criminal investigation into Clinton’s use of the private server and the possible mishandling of classified information.

According to one official that spoke with The Post, the immunity agreement was used so the FBI could secure the cooperation of former Clinton aide Bryan Pagliano, who originally set up the private server in her New York home in 2009.

Last year, Magliano invoked his 5th Amendment right in refusing to testify before a congressional committee panel and he also  invoked a less well-known 5th Amendment “non-production privilege” that protects a witness from being compelled to disclose the existence of incriminating documents.  However, if the witness produces such documents, pursuant to a grant of immunity, the government may not use them to prepare criminal charges against him.

As George Washington University law professor Jonathan Turley mentioned in a series of tweets tonight, this is not good news for Hillary Clinton.

Not good news for Clinton. DOJ has given immunity to staff who set up server. https://t.co/2yNqgnhgUD

DOJ does not give immunity without something valuable from a potential target like Bryan Pagliano. The situation just got more precarious.

So, it appears what Turley is referring to in these tweets is that fact that federal investigators will not offer immunity to a potential target like Pagliano without getting something valuable (usually incriminating) in return.  Given Pagliano’s earlier attempt to invoke his 5th Amendment right to “non-production” with respect to producing certain incriminating documents, I would venture to assume that he was offered immunity in exchange for handing over the documents.

Furthermore, as with any immunity agreement, the person given immunity (Pagliano) is required to fully cooperate with the government and completely tell the truth about everything, or they can drop the immunity agreement and charge him with lying to a federal agent as well as any other crime, including those that would’ve been covered by the immunity agreement.  So, he cannot go into these meetings with the FBI and still potentially try to brush over anything — he has too much hanging over his head to risk that.

While the Clinton campaign has continuously referred to the FBI probe as a “security review,” multiple current and former officials in the FBI and  DOJ have told The Post that it is not merely a security review, rather investigators are looking for evidence to determine if a crime was committed as a result of Clinton’s use of the private server.

“There was wrongdoing,” said a former senior law enforcement official. “But was it criminal wrongdoing?”

Here are two different opinions about what could happen from LawNewz.com: