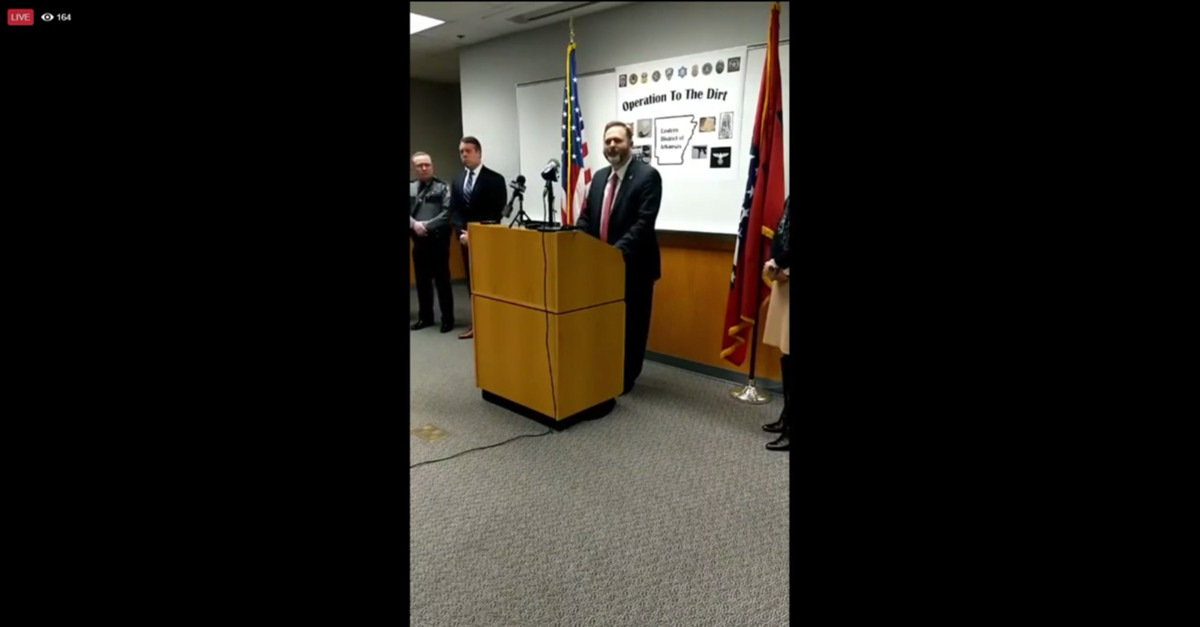 More than fifty members of a white supremacist gang suspected of engaging in various acts of violence were charged in a sprawling indictment unsealed today in the Eastern District of Arkansas.

According to the U.S. Department of Justice (DOJ), 54 adherents of the New Aryan Empire (NAE) were charged with participation in a racketeering enterprise that plotted and engaged in attempted murder, solicitation of murder, kidnapping, maiming and conspiracy in service of “a wide-ranging drug-trafficking operation” which sought to distribute large quantities of methamphetamine.

Law enforcement nicknamed their operation “To The Dirt,” a sardonic reference to that NAE slogan which itself references the gang’s overarching rule that members who join up are saddled with their gang affiliation for life.

The investigation began in 2016 when the Bureau of Alcohol, Tobacco, Firerams and Explosives (ATF) assisted the Pope County Sheriff’s Office with a murder investigation. The DOJ alleges that said murder investigation “involved members of the NAE, a white supremacist organization that began as a prison gang and has since expanded beyond the prisons.”

Tuesday’s press release notes that the county-federal investigation eventually turned up information that “several” NAE members engaged in meetings that led to the group’s participation in the alleged methamphetamine distribution scheme. The associated violence, prosecutors claim, was inseparable from the drug dealing enterprise.

“According to the allegations in the indictment announced today, New Aryan Empire associates maintained their criminal enterprise by engaging in multiple acts of violence — including kidnapping and attempting to murder one informant, and stabbing and maiming two others suspected of cooperating with law enforcement,” said Assistant Attorney General Brian A. Benczkowski. “I want to thank our federal, state, and local law enforcement partners for vigorously investigating this vicious criminal organization.”

The press release goes on to detail some of the specific allegations against a few of the dozens of named defendants included in the indictment:

[B]etween May 2014 and May 2016, NAE associates Marcus Millsap, 51, of Danville, Arkansas, and James Oliver, 47, of Russellville, as well as NAE President Wesley Gullett, 29, of Russellville, solicited several NAE members and associates to murder the confidential informant responsible for Millsap being charged with drug trafficking.

“NAE members believed this informant had provided information about Millsap to law enforcement,” the release notes. “In January 2016, two known members of NAE attempted to murder the confidential informant, but were unsuccessful.”

The indictment also alleges that “members and associates of NAE kidnapped, stabbed and maimed” two people who they believe had worked with law enforcement by providing authorities with information about the white supremacist outfit.

“During the kidnapping, the victims were forced to write apology letters to the NAE member and his girlfriend,” the press release says.

“The violence and hatred alleged in this superseding indictment have no place in society,” Hiland said. “We are committed to helping our communities remain free from these types of crimes using every resource available, including the powerful RICO statutes when appropriate.”