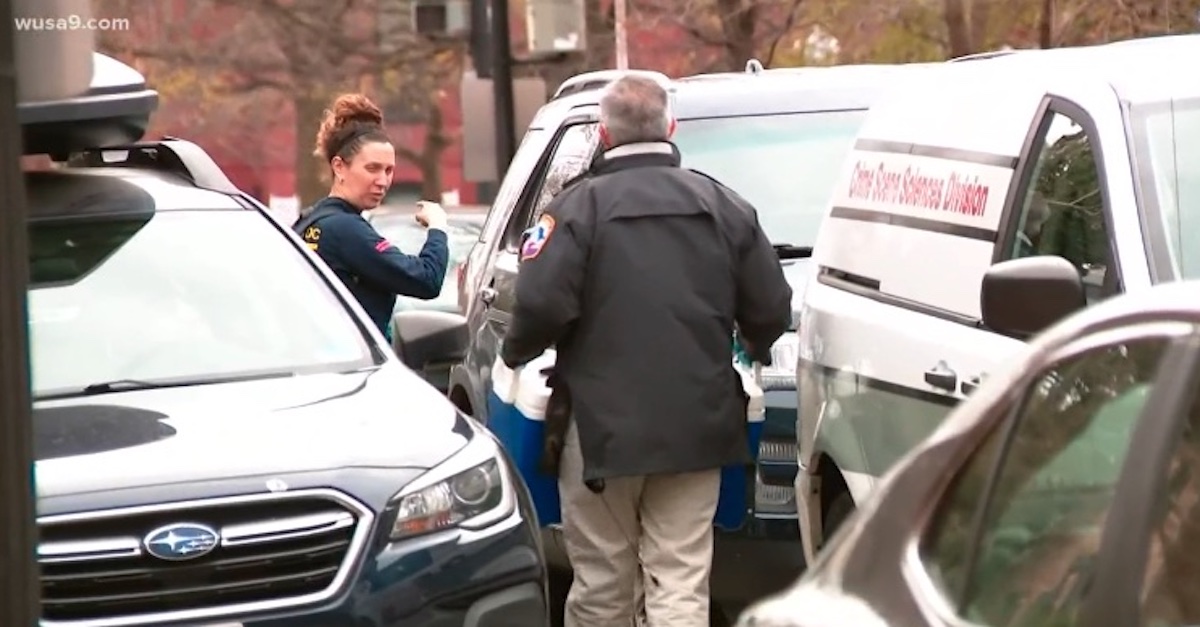 Police in Washington discovered five fetuses at the Capitol Hill-area home of an anti-abortion activist currently facing criminal charges for forcing her way into a reproductive health clinic.

Investigators from the Metropolitan Police Department made the troubling discovery at around 12:30 p.m. on Wednesday, after responding to a top regarding “potential bio-hazard material” at the Capitol Hill-area location, according to a statement emailed to Law&Crime.

“Upon further investigation, MPD located five fetuses inside a residence at the location,” the statement said. “The fetuses were collected by the DC Office of the Chief Medical Examiner. This is currently a pending investigation.”

The news was first reported by local CBS affiliate WUSA.

“When I asked anti-abortion activist Lauren Handy what homicide detectives pulled out of her house Wednesday, she only said, ‘people will freak out when they hear,'” journalist Nathan Baca posted to Twitter on Thursday. “DC Police now says it found 5 fetuses.”

When I asked anti-abortion activist Lauren Handy what homicide detectives pulled out of her house Wednesday, she only said, “people will freak out when they hear.” @DCPoliceDept now says it found 5 fetuses. @wusa9 pic.twitter.com/9Uvm7JY9dQ

Handy and nine other people were indicted Wednesday by a federal grand jury in connection with what prosecutors say was a conspiracy to block access to a reproductive health care clinic. They are also accused of violating the Freedom of Access to Clinic Entrances (FACE) Act.

According to the indictment, which does not name the health center, Handy posed as a woman named “Hazel Jenkins” and made an appointment for Oct. 22, 2020 at the clinic, which provides services by appointment only. When Handy arrived, she presented herself to a medical specialist at the clinic, again claiming the false identity.

Shortly before the clinic opened, Handy and eight of her co-defendants—Jay Smith, Paulette Harlow, Jean Marshall, John Hinshaw, Heather Idoni, William Goodman, and Joan Bell—allegedly gathered in the hallway and stairwell outside the clinic. When the medical specialist opened the doors to the clinic, the defendants “forcefully pushed through the Clinic door into the Clinic’s waiting room,” the indictment says.

The action was so forceful, the indictment says, that a nurse fell and sprained her ankle.

Things escalated from there.

“Once inside the Clinic’s waiting room, Handy, Smith, Harlow, Marshall, Hinshaw, Idoni, Goodman, and Bell set about blockading two Clinic doors,” the indictment says. “Handy directed conspirators on what to do.”

At Handy’s direction, members of the group allegedly moved chairs in the waiting room to block a door to the clinic’s treatment area. Then, using a chain and rope that Handy had with her in a duffel bag, some of them “sat in the chairs they had placed to obstruct passage into the Clinic’s treatment area and chained and roped themselves together.”

Meanwhile, two members of the group, Goodman and Idoni, went into the hallway and stood in front of the doorway, prosecutors say. According to the indictment, they successfully blocked a patient from entering the treatment area twice: first from the lobby and then again when she tried to use the employee entrance in the hall.

Handy also allegedly stood at the doorway of the clinic’s main entrance, blocking individuals trying to enter the waiting room.

Handy’s co-defendant, Jonathan Darnel, apparently live-streamed the incident on Facebook. Prosecutors say he created an event titled “No one dies today” and captioned it “Starting soon! Tune in!”

“We have people intervening physically with their bodies to prevent women from entering the clinic to murder their children,” he said, according to the indictment. Later, as he broadcast members of the group blockading the clinic entrances, he reportedly said: “[T]he rescuers are doing their job. They’re not allowing women to enter the abortion clinic. As long as they’re in there, no women can go in to kill their children.”

Prosecutors say that the members of the group “did willfully combine, conspire, and agree with one another … to injure, oppress, threaten, and intimidate patients and employees of the Clinic” in contravention of their right to access reproductive health services. They allegedly traveled to D.C. from seven different states, with some coming from as far away as Wisconsin and Massachusetts.

You can read the indictment, below.