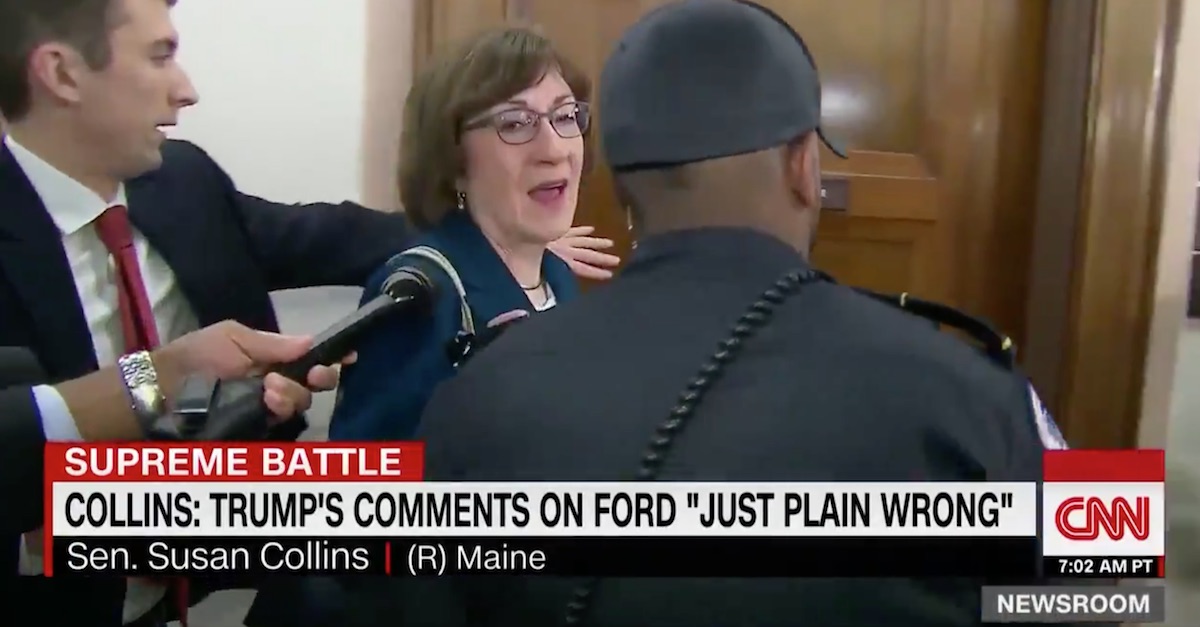 Some drama unfolded earlier Wednesday on Capitol Hill after Sen. Susan Collins (R-Maine) was tracked down by reporters and asked for her response to President Donald Trump‘s recent remarks about Brett Kavanaugh accuser Dr. Christine Blasey Ford. Members of the press tweeted their objections to being blocked off from Collins’ office by Capitol Hill Police.

People want to know if Collins’ vote will be “yes” or “no” when the U.S. Senate holds a vote to confirm Kavanaugh to the Supreme Court. This morning, Collins was asked about the president’s assessment of Ford’s sexual assault allegation against Kavanaugh.

Trump, while on the rally trail (after mostly staying silent on the issue), made comments like “So many different charges. Guilty until proven innocent … That’s very dangerous for our country. I have it myself all the time. Let it happen to me. Shouldn’t happen to [Kavanaugh].”

After that, tensions seemed to run high.

Capitol Police forced reporters to back off from Collins’ Senate office due to apparent concerns for the senator’s safety.

Capitol Police aren’t allowing staffers, members of the public, or the media to walk along the 4th floor of Dirksen pic.twitter.com/GSdcv8vPMq

Extremely tense moments as press stakes out Susan Collins. Capitol Police threatening to boot us from the area because of unfounded concerns about us being threat to her safety. Protestors are here too

At the moment we are staying

Shows how much pressure is on Collins

Capitol Police FORCE reporters to clear away from right outside of Susan Collins’ office, preventing us from asking questions — an over-the-top use of their authority to prevent the press from doing our job and questioning a key senator in a public hallway

The US Capitol Police is planning to move all media out of this hallway when @SenatorCollins departs the hearing room she’s in. This hallway is open to the public. We respect her safety and we do this every day. Not sure why today is any different. Video explaining below: pic.twitter.com/AkEB00VQkw

Now Susan Collins is hiding from protesters AND the press https://t.co/j2Mt8BJTFR

At least one correspondent acknowledged that Collins has faced “more harassment, serious threats and personal attack[s]” and that this is “neither hypothetical nor casual.”

It's complicated b/c of the threats against @SenatorCollins, who has faced more harassment, serious threats and personal attack than I believe people realize. It is neither hypothetical nor casual.

But press has never personally been a threat to senators. https://t.co/T08zwSKyvh