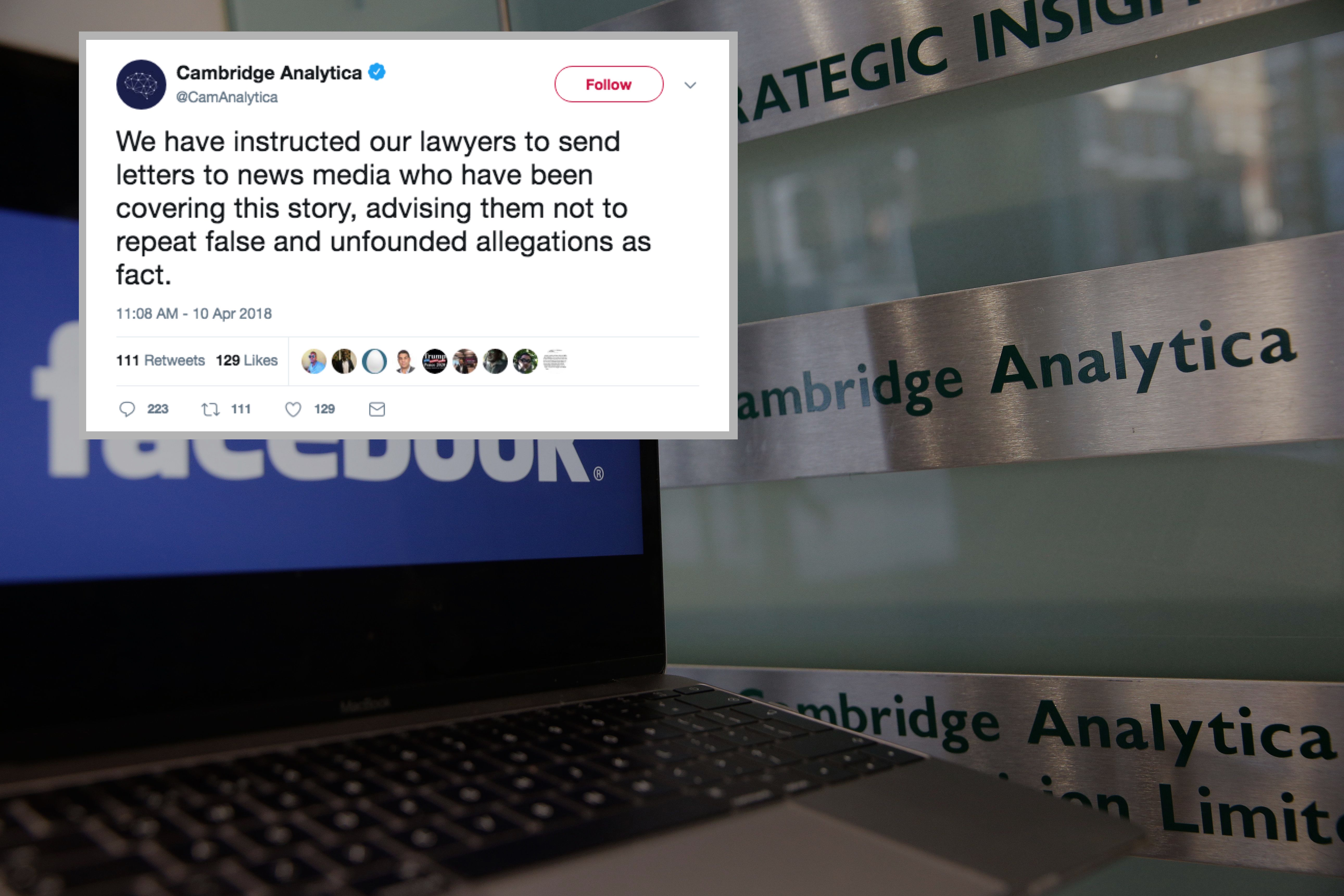 (Yeah. Okay. That’s not really how law or journalism works. But cease-and-desist letters are occasionally worth more than the price of postage. Competent attorneys, on the other hand, can be a bit more expensive.)

So, what exactly is stuck in Cambridge Analytica’s craw at the moment? Let’s dive back down the timeline.

The group’s prior tweet makes reference to allegations that Cambridge Analytica had access to some Facebook users’ private messages by way of shrink-wrapped authorizations baked into a personality quiz app designed to harvest user data.

According to Wired, Facebook explained the situation like this, “A small number of people who logged into ‘This Is Your Digital Life’ also shared their own News Feed, timeline, posts and messages which may have included posts and messages from you.” Wired‘s report continues [emphasis in original]:

A Facebook spokesperson confirmed that the app, which was designed by Cambridge University researcher Aleksandr Kogan to collect data on Americans on behalf of Cambridge Analytica’s British counterpart SCL, requested access to user inboxes through the read_mailbox permission. Unlike the collection of specific user friend information, which Facebook says it phased out in April 2015 unless both people had downloaded the same app, the read_mailbox permission didn’t fully deprecate until that October.

Further down their timeline, Cambridge Analytica denied using any GSR Facebook data “or any derivatives of this data in the US presidential election.” This denial, however, is severely incongruous with widespread reporting on the still-unfolding scandal.

Another tweet contains another denial: “Cambridge Analytica licensed data from GSR for 30 million individuals, not 87 million. We did not receive more than 30 million records from research company GSR.”

An April 4 statement from Facebook’s Chief Technology Officer Mike Schroepfer doesn’t quite jibe with Cambridge Analytica’s version of reality either.

That official statement revised upward the number of Facebook users potentially impacted by the Cambridge Analytica data scandal. A prior estimate from Facebook pegged that number at around 50 million users.

Last week’s statement from Facebook/Schroepfer confirmed that as many as 87 million users might have been affected. Similarly, the 87 million number has now become the basis for most reporting on the issue. Then, on Saturday, Cambridge Analytica’s co-founder Christopher Wylie said Facebook was likely under-estimating the number of users affected by Cambridge Analytica’s alleged data-based shenanigans.

But again, Cambridge Analytica says that’s all wrong. So, why the discrepancy? And why now?

Perhaps the embattled firm is frightened by the swelling amount of attention due to Mark Zuckerberg‘s two days worth of congressional testimony. In any event, Cambridge Analytica has shifted its denial strategy to issuing vague threats of litigation in the general direction of journalists. But that strategy is not likely to shift attention away from their behavior or accrue to the firm’s benefit whatsoever.

Law&Crime reached out to Cambridge Analytica for more information but no response was forthcoming at the time of publication.