Blink and You May Have Missed it? Andrew McCabe’s Lawyer Is on Christine Ford’s Legal Team 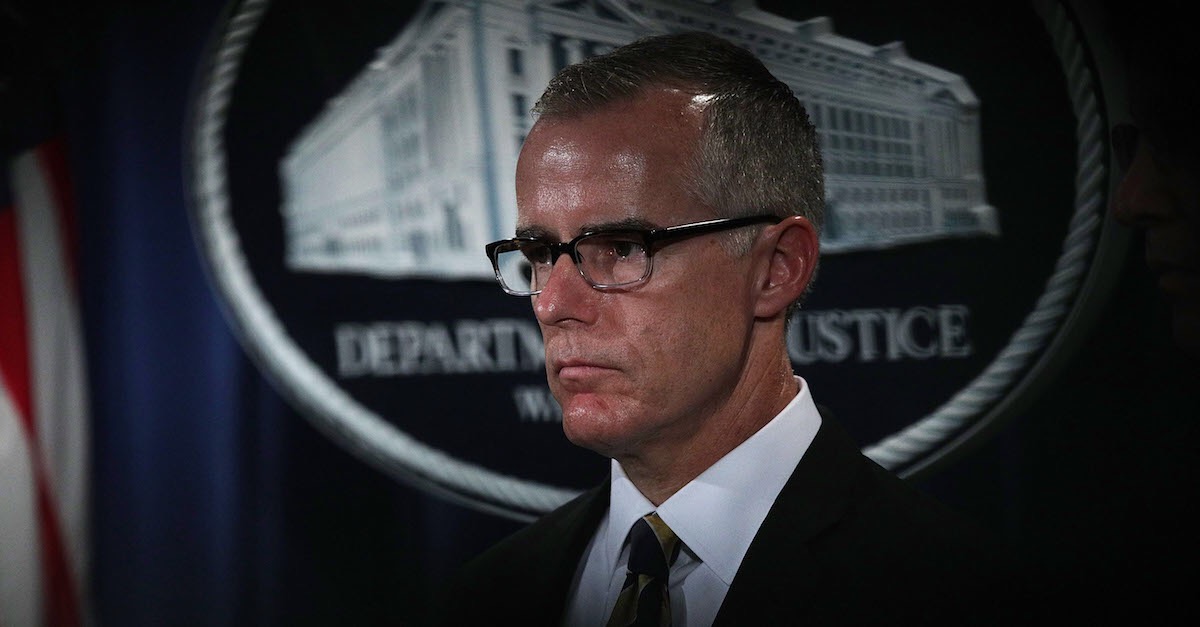 After a vexing series of public and private negotiations between Ford’s lawyers and the Republican leadership on the Senate Judiciary Committee, lead attorney Debra Katz released the following statement:

Dr. Ford accepts the Committee’s request to provide her first-hand knowledge of Brett Kavanaugh’s sexual misconduct next week. Although many aspects of the proposal you provided via email, on September 21, 2018, at 2:33 pm, are fundamentally inconsistent with the Committee’s promise of a fair, impartial investigation into her allegations, and we are disappointed with the leaks and the bullying that have tainted the process, we are hopeful that we can reach agreement on details. Can we set up a time for later this afternoon to continue our negotiations?

Republican Sen. Orrin Hatch (R-Utah) immediately panned the response as being effectively nothing more than what was offered by Ford’s team last Monday–due to the lack of specifics contained therein.

Perhaps more controversially, however, is the name carbon copied underneath Katz’s signature block.

That name, of course, is Michael Bromwich. Bromwich has represented former FBI director McCabe since the latter was unceremoniously fired from his position within the FBI on the eve of his planned retirement.

A previous Law&Crime story by the present author identified Bromwich’s firm as the impetus behind McCabe’s putative “grassroots” half-a-million-dollar GoFundMe operation. That report also noted the pedigree of the firm now helmed by the former Obama administration appointee:

The Bromwich Group is a K Street consulting and PR firm headed by Michael R. Bromwich. Immediately prior to founding the firm, Bromwich served as the first director of the Bureau of Ocean Energy Management under President Barack Obama. As a former mineral extraction regulator, Bromwich promised that his firm would never lobby for energy industry clients. Prior to this role, Bromwich served as the Inspector General for the Department of Justice under President Bill Clinton.

Melissa Schwartz, a crisis and communications consultant at The Bromwich Group, confirmed Bromwich’s involvement with Dr. Ford’s case mid-afternoon on Saturday via Twitter:

This is true. We are proud to be new members of Team Ford #IBelieveChristine cc: @mrbromwich https://t.co/2PZOCXP3Qo

Bromwich himself followed suit through Twitter as well, writing, “I’m honored to be joining Debra Katz and Lisa Banks in representing Dr. Ford.”

In a statement provided to the employees of his now-former law firm, Bromwich announced his immediate resignation due to objections from the firm’s partners. He wrote, in part:

Within the past few days I have been asked to be one of Christine Blasey Ford’s attorneys. My role will likely require me to appear publicly on Dr. Ford’s behalf, and the Senate is being advised of my involvement this afternoon. Because objections have been raised within the partnership to my doing so while employed by the firm. I am resigning from the firm effective immediately. This obviously is happening on a schedule that could not be anticipated.

Law&Crime reached out to both Bromwich and Schwartz for additional comment and clarification on this story but no responses were forthcoming at the time of publication.

[image via via Alex Wong/Getty Images]