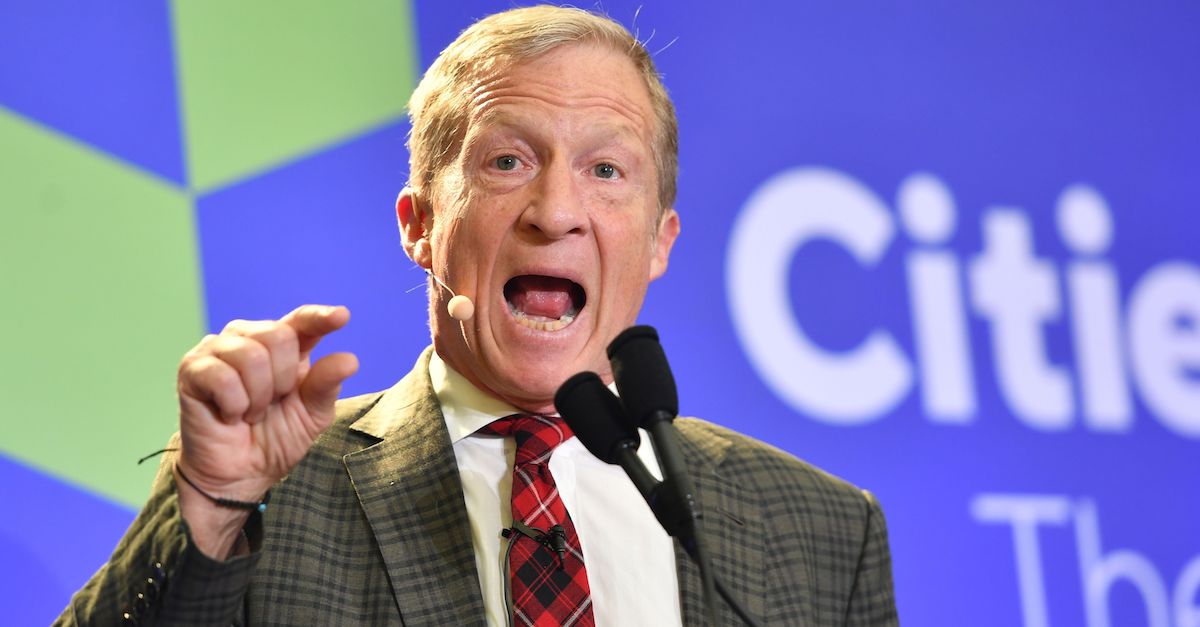 Billionaire hedge fund manager Tom Steyer, an outspoken adversary of President Donald Trump and the founder of the “Need to Impeach” campaign, is organizing a “special town hall” in an effort to take down the president and Republicans across the board as the November midterm elections approach at breakneck speed.

Steyer put out a press release on Friday to say that on Saturday, Oct. 20, he will be hosting a town hall in Newark, N.J., “a year to the day since launching the fast-growing campaign to remove Donald Trump from power.”

According to the press release, Steyer is going to be answering questions from audience members in the Kirby Gymnasium at Phillip’s Academy and from people who are watching it online.

This is what Steyer is saying the “discussion” will cover:

How Need to Impeach, which now has more than 6 million supporters, has evolved into a major player in Democratic politics.

How the Need to Impeach movement turned into a major voter bloc, with, on average, nearly 14,000 supporters in each congressional district—enough to impact elections.

The work to engage millions of infrequent midterm voters in key congressional districts ahead of the Nov. 6 midterm elections.

A note card writing campaign that includes more than 78,000 supporters handwriting over 1.6 million note cards to infrequent midterm voters urging them to vote.

Where the Need to Impeach movement will go next.

The town hall is scheduled to being at 4 p.m.

When contacted by Fox News about this, Need to Impeach strategist Kevin Mack replied, “We’re not going away,” and, “We’re going to hold President Trump accountable.”

The Atlantic ran a piece Friday morning headlined, “How Tom Steyer Built the Biggest Political Machine You’ve Never Heard Of.” Then the subheader: “Having spent $120 million and signed up 6 million people, Tom Steyer has assembled, in a year, an organization with more reach than the NRA.”

The piece says that Steyer employs 60 people to promote this agenda, with many of them working as grassroots organizers across the country.

Interestingly, those involved in the campaign don’t even necessarily believe Trump will be impeached, but think “it’s empowering for people to realize how divided the country is.”

Kevin Mack would add, “Impeachment to them is a value—it’s not a legislative process. It’s like, ‘Build that wall.’”