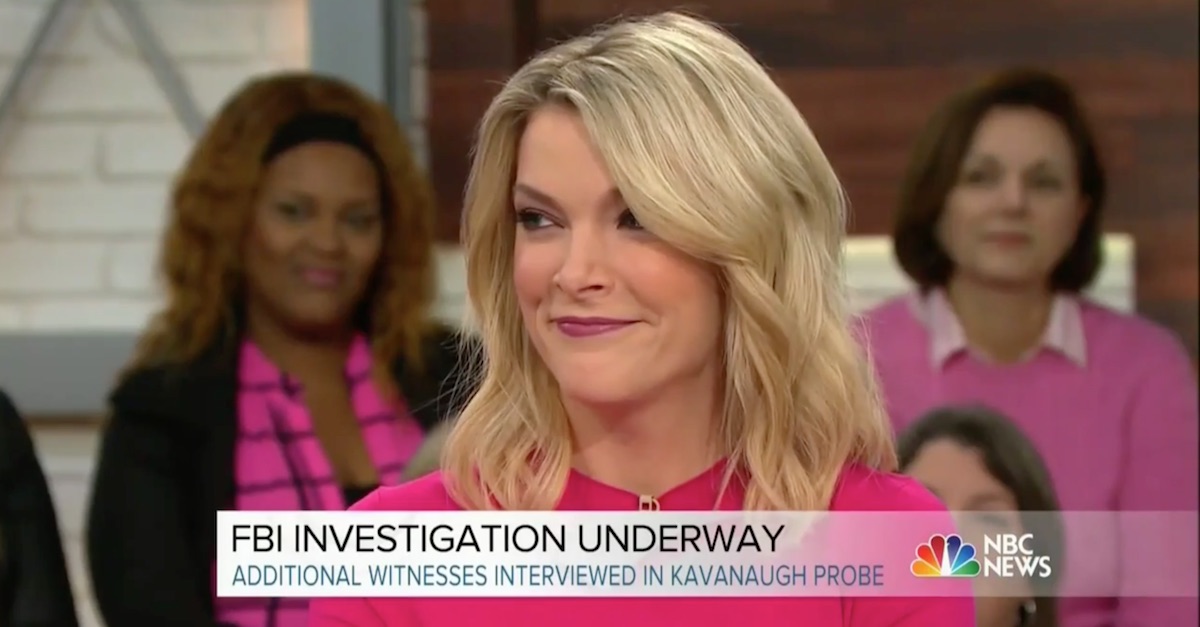 Michael Avenatti was not pleased that NBC’s Megyn Kelly called into question his client Julie Swetnick‘s story that Brett Kavanaugh was present at parties where “gang rapes” of women occurred in the 80s. Kelly did so by mentioning stories from Swetnick’s past.

Kelly mentioned that Swetnick’s ex-boyfriend Richard Vinneccy filed for a restraining order in the early 2000s because, he claimed, that Swetnick threatened his family after a breakup. Although it is true that Vinneccy filed for a restraining order, neither he nor Swetnick appeared at a scheduled court date. That case for a permanent injunction was dismissed.

Vinneccy, a registered Democrat, first made news when he spoke with Politico. He said Swetnick is “not credible at all.”

Swetnick also faced sexual misconduct allegations of her own almost two decades ago.

Kelly alluded to The Oregonian‘s story on Swetnick, which said her former employer Webtrends sued for defamation in 2000.

“She faced her own accusations of misconduct at a Portland company years ago. That company claims she told them she graduated from Johns Hopkins but they learned the school had no record of her, she also falsely described her work experience,” Kelly said. “[Swetnick] engaged in unwanted, sexually offensive misconduct herself, they said she made false and retaliatory allegations against her coworkers that they had been inappropriate with her, that she took medical leave and simultaneously claimed unemployment benefits at the same time in DC, there was a restraining order filed against her by an ex-boyfriend.”

Avenatti called both of these legal actions “bogus,” citing their quick dismissal from court as proof. In particular, he called the Webtrends suit “retaliation” for Swetnick’s claims against the company.

. @megynkelly – I generally respect your work as a journalist but you should be ashamed of yourself for attacking my client, a sexual assault victim, without facts. And you base your attacks on bogus legal actions that were filed & almost immediately dismissed. You know better.

Addressing Megyn Kelly directly, Avenatti said, “I generally respect your work as a journalist but you she be ashamed of yourself for attacking my client, a sexual assault victim, without facts. And you base your attacks on bogus legal actions that were filed & almost immediately dismissed.”

“You know better,” he said.