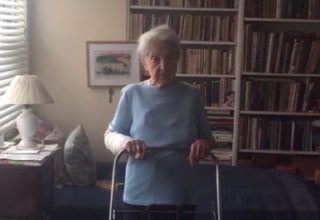 An unknown attempted robber probably thought she’d have an easy time snatching a purse from a 90-year-old woman on the streets of New York City. She didn’t know who she was dealing with. Gina Zuckerman isn’t your average little old lady, so when the suspect tried to take her bag on Tuesday, she was having none of it.

Originally from Poland, Zuckerman spent six years in a Nazi labor camp after Germany invaded her country in 1939. For the past 20 years, she’s been living in Manhattan’s Greenwich Village, where the attempted theft took place.

Zuckerman told the New York Post that she was walking down the street with a pushcart, when a woman attacked her from behind. Police said the woman tried to take Zuckerman’s bag, which was hanging from the cart. Zuckerman held onto it, refusing to let go. The unidentified assailant dug her fingernails into Zuckerman’s arm, cutting her, and knocked her to the ground. Still, Zuckerman held on.

“I wouldn’t give it to her. I fought her off. I was stronger than her,” she told the Post. “No woman is going to attack me!”

Police said that the woman told bystanders that she was Zuckerman’s aide and that the elderly woman fell frequently. She eventually ran off before officers responded to the scene.

Zuckerman said, “I would have gladly given her $5,” if the woman had asked. “But I was not going to be beaten for it.”