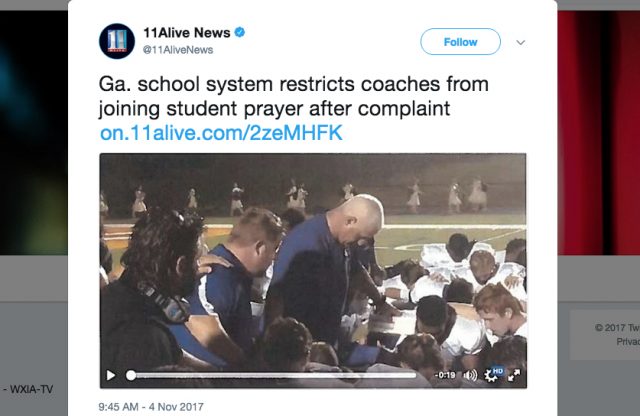 A public school system in Georgia has disallowed high school athletics coaches–and all other staff–from leading students in prayer.
The reversal came after one high school district was instructed as to the unconstitutional nature of such faculty-and-staff-led prayers.
The Freedom From Religion Foundation (“FFRF”) sent a cease-and-desist letter to the Coweta County School System on October 25–after leaked video showed football Coach John Small praying with his team prior to a game.
Christopher Line, a Legal Fellow with the FFRF wrote, in that letter:

It is illegal for public school athletic coaches to lead their teams in prayer. The Supreme Court has continually struck down school-sponsored prayer in public schools…Coach Small’s conduct is unconstitutional because he endorses and promotes his religion when acting in his official capacity as a school district employee.

The oldest case cited is Engel v. Vitale, which banned school-sponsored prayers in public schools. The latest case cited is Borden v. School District of the Township of East Brunswick, which categorized a high school basketball coach’s participation in student-led prayers an unconstitutional endorsement of religion.

The school district responded to the FFRF letter with haste.

[Superintendent Steve Barker] met with the principals of all three high schools and advised that no school staff nor volunteer staff may lead or participate in any prayer or other religious activity before, during or after high school football games.

The FFRF thanked the school district for the quick turn-around time. In response, the foundation’s co-president, Annie Laurie Gaylor wrote, “We appreciate the district’s swift action to address the violation and its commitment to protecting the rights of conscience for all of its students.”
[image via screengrab/Twitter/11ALIVE]
Follow Colin Kalmbacher on Twitter: @colinkalmbacher