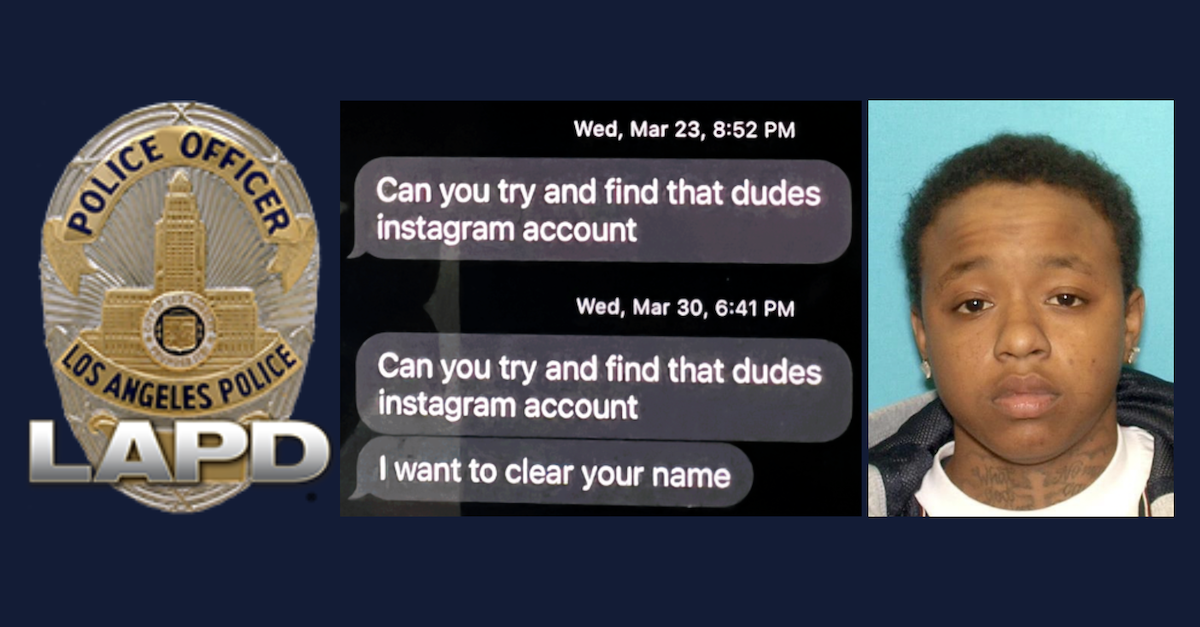 Brieshanay Quenise Ford (right) is facing a federal gun charge that her lawyers say was pushed by a Los Angeles police detective who’d been seeking her cooperation in a homicide investigation. The text message is one he sent her the day of her arrest. (Photos: LAPD and U.S. District Court files)

Four months into their representation of a woman in a seemingly routine gun case, public defenders in Los Angeles notified federal prosecutors of what they described as a fundamental problem: A police detective instigated the charges as revenge for their client’s refusal to cooperate in a homicide probe.

The lawyers cited text messages Detective David Vinton sent the woman before she was charged, showing him asking for her help that went unanswered. The attorneys also described a “egregious history of misconduct” that includes his well-documented involvement in the Los Angeles Police Department’s infamous scandal involving the corrupt Rampart Division anti-gang unit in the late 1990s.

“We are, quite frankly, surprised that someone with this kind of history has any kind of relationship with or sway over a federal agent or the [U.S. Attorney’s Office],” according to the Aug. 5 letter from deputy public defenders Antonio Villaamil and Waseem Salahi.

The letter went unanswered, but a judge this week made clear Vinton’s conduct is of no concern to him, rejecting Villaamil and Salahi’s motion to dismiss the case for vindictive prosecution while chiding them for suggesting the federal gun charge against 31-year-old Brieshanay Quenise Ford was unusual.

Detective Vinton “may have done whatever he did to try to elicit information from her, but you haven’t laid that at the feet of these prosecutors. that’s the problem,” U.S. District Judge Percy A. Anderson said during a Zoom hearing Tuesday. “They made an independent judgment as to whether or not she’d be charged.”

Salahi told the judge the state matters often are referred to federal authorities for possible charges, however, “generally these cases don’t come onto the federal radar like this.”

“It’s his decision to retaliate that we’re really focused on,” Salahi said of Vinton. “He was trying to use the federal prosecution as leverage to overcome her 5th Amendment invocation on an independent matter.”

Villaamil and Salahi can appeal Anderson’s rejection of the motion once the case is adjudicated. They have not yet said if they will, but it’s an unusual motion with little caselaw from which to draw, and they vowed in their Aug. 5 letter to aggressively pursue the issue on behalf of Ford.

The prosecutors assigned to the case, Assistant U.S. attorneys Alexander Su and David Williams, said in their opposition to the dismissal motion that Ford was attempting “to transform a straightforward case about a repeat felon’s illegal possession of a gun into a trial about an unrelated state murder investigation.”

Ford was charged in March after Vinton told her he’d refer her case to an FBI agent if she didn’t cooperate in his investigation into a homicide at a gang-related party in LA in October 2021. With felony convictions for grand theft, robbery and burglary, Ford already was facing a gun charge in California state court after police found a .22 caliber handgun in her waistband during a November 2021 traffic stop, according to court filings, which Ford called “my strap.” Ford said Vinton told her he would refer her case to federal agents after she repeatedly asked for a lawyer as he questioned her about the homicide. He also told her he knew the agent, Sarah Corcoran, and Ford said he showed her a text message exchange with Corcoran as it happened in real time.

In what her lawyers emphasized Tuesday is an undisputed account of what happened, Vinton continued contacting Ford, including asking her in a March 23 text message, “Can you try and find that dudes Instagram account.” She didn’t respond, and Corcoran obtained a search warrant for Ford’s phone a week later that her lawyers say “appears to have been a pretextual means” to access the phone “to benefit Detective Vinton’s homicide investigation.”

Vinton again texted Ford asking for assistance — he added “I want to clear your name” — which she ignored. Then Corcoran arrested Ford on April 21. Corcoran said in a sworn declaration filed by federal prosecutors that she didn’t know of Ford invoking her Fifth Amendment rights in Vinton’s homicide investigation until after her arrest.

Corcoran and Vinton then interrogated Ford “not about the firearms charge for which she had just been arrested, but instead about Detective Vinton’s homicide investigation,” according to the dismissal motion.

“Detective Vinton told Ms. Ford, while SA Corcoran was present, ‘You have one more chance to tell us who did it.’ As before, Ms. Ford refused to answer questions,” according to the motion. “She began to cry. Detective Vinton told her, ‘You see? I told you this was going to happen.'”

Ford’s lawyers haven’t accused prosecutors of knowing about Vinton’s vindictive intent. But they say its mere presence warrants dismissal as it taints Vinton’s contacts with Corcoran, the case’s lead agent, and means the government “colluded with him along the way.” And they said if the judge doesn’t believe dismissal is warranted because of vindictive prosecution, he should dismiss it under his inherent authority to do so as an Article III judge.

“The fact that charges were filed in part to impose harsher penalties than the ones available in state court is of no moment and is, for that matter, permissible,” the judge said.