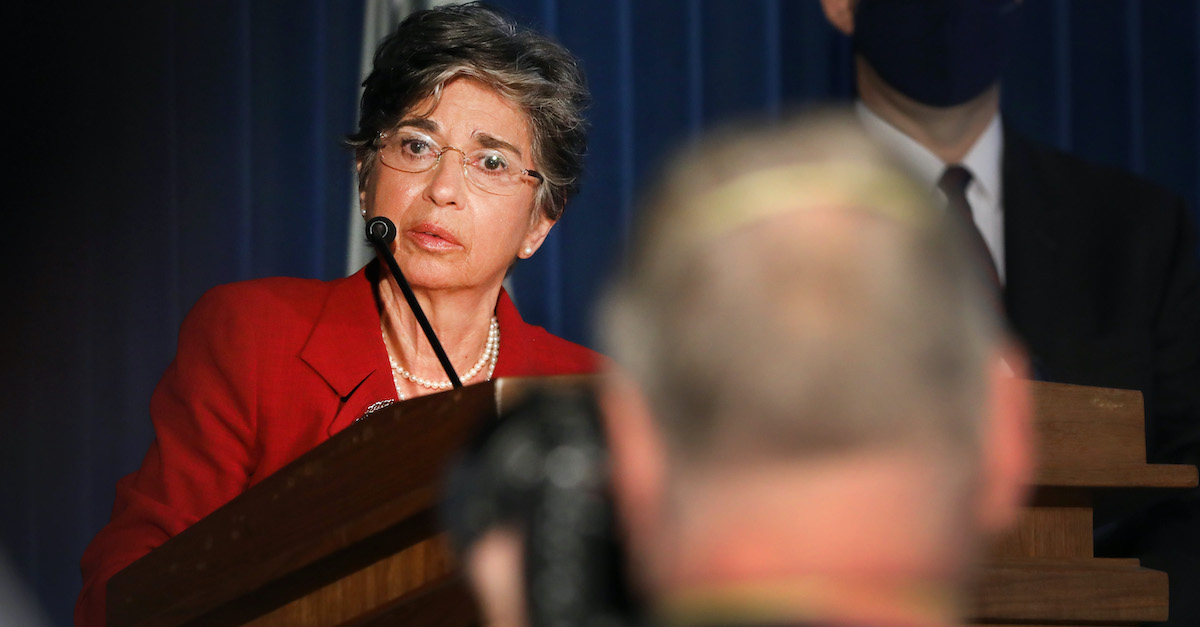 Audrey Strauss, the Acting United States Attorney for the Southern District of New York, speaks to reporters at a press conference on July 02, 2020 in New York City.

A federal judge in Manhattan on Wednesday admonished prosecutors for repeatedly withholding evidence in a criminal prosecution, urging the Justice Department’s Office of Professional Responsibility to conduct a full-scale investigation into the underlying conduct.

But all of those charges were thrown out even after a jury found him guilty in March 2020 because, according to U.S. District Judge Alison Nathan of the Southern District of New York (SDNY), the government’s case was “marred by repeated failures to disclose exculpatory evidence and misuse of search-warrant returns.”

Nathan first ordered then-acting U.S. Attorney Audrey Strauss in Sept. 2020 to force all of her Assistant U.S. Attorney and Special Assistant U.S. Attorney subordinates to read and comprehend her original opinion and to provide certifications that the homework assignment had been completed. The judge then ordered all of the prosecutors involved in the Nejad case to submit declarations under the penalty of perjury which detailed the government’s disclosure failures and subsequent misrepresentations — all to help decide whether further fact-finding was required.

Strauss was elevated to acting U.S. Attorney in June 2020 after Geoffrey Berman’s highly controversial ouster by then-Attorney General Bill Barr and then-President Donald Trump. She was Berman’s deputy. In Dec. 2020, Strauss was appointed by the U.S. District Court for the Southern District of New York.

Nathan on Wednesday released a four-page order summarizing the findings contained in a more comprehensive Opinion filed concurrently. The full opinion is under temporary seal to allow prosecutors to propose redactions.

While the judge concluded that prosecutors likely did not commit intentional misdeeds, the order did not pull any punches with regards to the actions of the assistant U.S. attorneys. It said they attempted to “bury” exculpatory evidence in previously disclosed documents and “falsely implied” to the Court that they had informed the defense of the newly disclosed material.

“The Court remains of the view expressed in its September 16 Opinion that the disclosure failures and misrepresentations in this case represent grave derelictions of prosecutorial responsibility,” Nathan wrote. “However, based on the record before it, the Court does not conclude that any of the prosecutors knowingly withheld exculpatory information or intentionally misrepresented facts to the Court. In light of this, and given the systemic nature of the errors and misconduct that occurred in this case, the Court will not engage in further fact-finding. Instead, the Court urges a full investigation by DOJ’s Office of Professional Responsibility of all matters related to prosecutorial misconduct in this case.”

Nathan also denied prosecutors’ requests to have their declarations remain under seal, saying “accountability and reform” can “come from sunlight.” The judge gave prosecutors until Friday to recommend redactions.

“The prosecutorial misconduct in this case is of exceptional public interest, bearing both on the fair administration of justice for criminal defendants and the efficacious prosecution of violations of federal law,” she wrote. “The Court concludes that the public interest in access to the prosecutor declarations, exhibits, and party letters in this case outweighs the privacy interests of those involved, and so orders release of substantially all of those materials.”