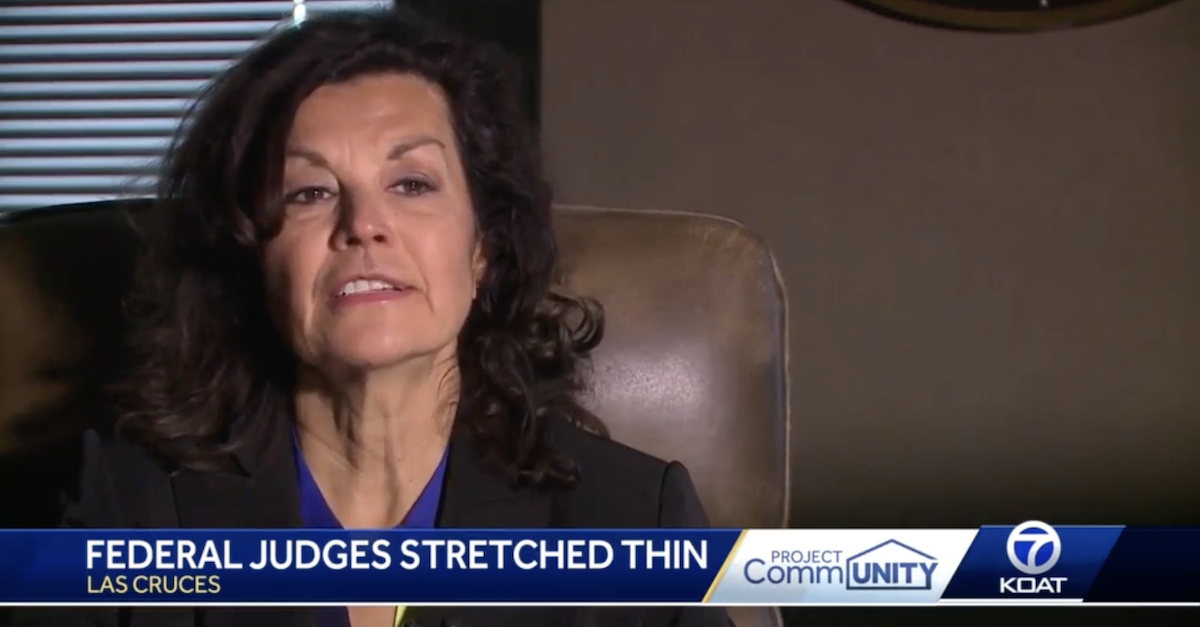 A U.S. magistrate judge in New Mexico who left the bench last month earned an unusual recognition on her way out: A 16-page order from the Judicial Council acknowledging a career of misbehavior.

Federal judges voted not to reappoint Carmen E. Garza after her second, eight-year term ended last month, but the Judicial Council for the 10th Circuit Court of Appeals said it still needed to identify “potential institutional issues” regarding the hostile work environment clerks and colleagues said she fostered during her 16 years on the bench.

“The Judiciary, including this Circuit, has made progress in the area of workplace conduct, but it is clear that there is more work to do,” according to the order signed Wednesday by 10th Circuit Chief Judge Timothy M. Tymkovich.

The result is a rare order that publicizes the dishy details of a special committee investigation into complaints of abuse by Garza brought by two former law clerks and two former employees who remained anonymous. The “extensive” investigation “interviewed every full-time employee who had ever worked for Judge Garza,” as well as four of her bench colleagues and “three other individuals with knowledge relevant to the Committee’s investigation.”

The committee, which included Tymkovich, heard of manipulation, threats, “derogatory and egregious statements about her own staff, other court employees, and judges” as well as “unpredictable and hypercritical outbursts.” But one overarching consistency stood out: A palpable fear of retaliation.

“The employees’ fears may not have been unfounded,” according to the order. “The Committee’s investigators periodically contacted employees who were still working directly with Judge Garza to ensure that the judge was not further engaging in misconduct. The employees reported concerns that Judge Garza was attempting to retaliate against one or more of them in her final days on the bench.”

The order described how Garza told New Mexico’s chief district judge, William P. Johnson, that some of the witnesses against her had acted inappropriately toward one of her law clerks. Johnson, “without realizing the potential for relation,” sent a staff-wide email warning all employees “that such conduct would not be tolerated.” A few witness who got the email said they were worried Garza was using the clerk and Johnson “as a veiled path for retaliation against them.” Tymkovich and Johnson ended up addressing all employees in the courthouse where Garza worked “to remediate any possible harm stemming from Judge Garza’s actions.”

“This was important both to allay the fears of the employees who had participated in the misconduct process, and also to preserve the integrity of the Judiciary,” according to the order.

The Judicial Council is further studying how to address potential workplace retaliation after determining that if it determined retaliation was occurring, “there would have been limitations on its ability” to do anything about it.

“Nearly all of the witnesses, from those who worked for Judge Garza early in her tenure to those who worked for her near the end of her appointment, consistently described similar patterns of conduct,” according to the order. Many “if not all” of Garza’s bench colleagues, however, “were unaware of the breadth and nature of Judge Garza’s conduct.”

”Many of them questioned whether what little information they had rose to the level of misconduct or implicated their reporting obligations,” according to the order. “Perhaps more problematic, several of Judge Garza’s employees indicated that even though they thought her behavior could constitute misconduct, they did not report the conduct because they feared retaliation.”

All eventually agreed to speak with committee investigators, “but most on the condition of anonymity, and most employees later indicated that they did not want their experiences reflected in the Special Committee’s report.” The order notes in a footnote that the committee “found it difficult to balance the requests for anonymity with Judge Garza’s due process rights, which lengthened and complicated the misconduct process.”

The committee recommended additional training “to address the continuing lack of awareness of what specifically constitutes abusive conduct and a hostile work environment,” which the Council said it will order.

“The Council believes this will make judges more mindful of their conduct and their colleagues’ conduct and give employees confidence in what behavior should be reported,” the order said.

Fears of retaliations are more challenging to overcome, the Council said, but “the most effective way to assuage employees’ fears of retaliation is to demonstrate that the Judiciary’s reporting systems are effective at addressing misconduct.” The order concluded that the judges’ vote not to reappoint Garza “was a direct result of the complainants’ courage in reporting the alleged misconduct” as well as guidance from the Tenth Circuit’s workplace relations director and the committee’s investigation.

“The Judicial Council will work with the Tenth Circuit’s Workplace Conduct Committee to determine what other measures should be taken to make this circuit an exemplary place to work,” Tymkovich wrote.

Magistrate judges are appointed to eight-year terms by the federal judges in their districts. They generally handle arraignments, bail hearing, search warrants and civil discovery disputes, with the ability to preside over trials and full adjudicate cases should both parties consent.