‘Your Children Are Supposed to Bury You’: Grieving Parents of Murder Victim Speak Out About Domestic Violence 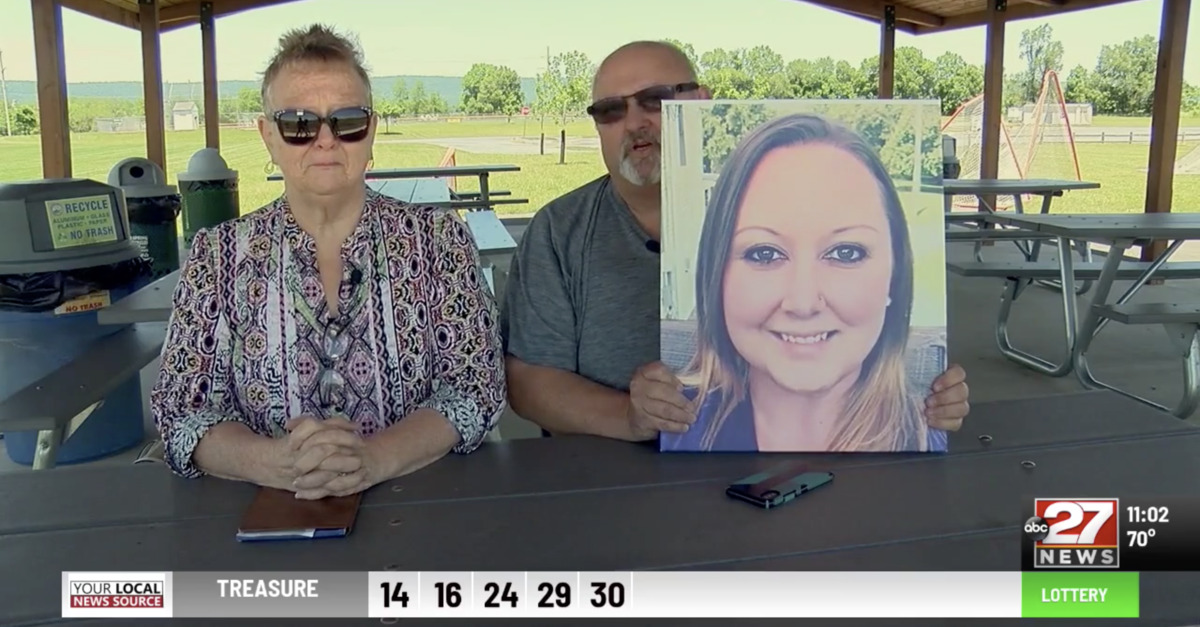 The parents of a woman killed by her husband in a murder-suicide earlier this month are mourning their daughter’s death and speaking out about the domestic violence she endured, calling for changes to the law.

“You shouldn’t bury your children,” Penni Spence, the mother of 36-year-old Elizabeth Wise, told Harrisburg, Penn.-based ABC affiliate WHTM on Thursday. “Your children are supposed to bury you.”

According to police, Wise was shot and killed by her husband on May 17. After she was dead, Brian Womelsdorf, 42, turned the gun to his own head and pulled the trigger.

Medics arrived to find the mother of three dead on the couch with multiple gunshot wounds. Womelsdorf was still alive and transported to a nearby hospital where he later died.

Family members and authorities both now acknowledge that the warning signs were there–they were just mishandled, ignored or unknown to those who could have helped.

“This individual had a very long history of domestic violence and abuse: two prior wives and also with our daughter,” Wise’s father Joel Spence said of Womelsdorf.

According to PennLive, Wise filed a police report against her husband earlier this year after he punched her in the face and abdomen. Nothing much came of that domestic violence call, however, because she didn’t ask for a protection from abuse (PFA) order.

“That choice should not ever be in a victim’s hand,” Joel Spence told WHTM. “Law enforcement should be able to explain to the judiciary, this individual needs a PFA. This is not a one-time incident.”

“Unfortunately it wasn’t a safe environment,” he added, in similar comments, to PennLive. “If the victim can’t make that decision, the court should step in and [say] ‘You’re not allowed back in the house.’ They need to change the laws to protect victims of abuse more than the abusers.”

But the woman’s parents, who live in North Carolina, admit they were shocked to discover that their seemingly happy daughter was being hurt and abused in her own home–especially since Wise and Womelsdorf had been married for less than a year.

“They got a dog, they got a pool, they got a new baby and everything seems good,” Spence explained to PennLive. “We had no clue [about] this incident in March where he used her as a punching bag.”

Womelsdorf was facing a simple assault charge from that incident; he was previously charged with simple assault over another domestic incident in 2007, according to law enforcement.

Whether a restraining order would have stopped an apparently determined killer intent on also taking his own life is an unknowable thing, but authorities also stumbled in their initial response to Wise’s terror and pain.

Wise originally called 911 dispatchers while she and her husband argued, PennLive notes.

“The call came out as an unknown problem,”Swatara Township Police Lieutenant Dennis Krahling said. “Dispatchers couldn’t figure out what was going on. The officers had no idea what they were about to see on the other side of the door.”

Wise’s parents believe the killing was pre-planned due to the time in between the calls and the steps that Womelsdorf had to have taken to retrieve and load the gun from upstairs before making his way back down to kill his final bride.

“People gotta be made aware of the violence of guns and not putting them in the hands of the wrong people,” Penni Spence, who is familiar with and not opposed to firearms, told WHTM.

“I’d like to see this face be the face on t-shirts, this face be people’s face that they remember a year from now, our daughter Elizabeth, a victim of domestic violence,” Joel Spence hoped, holding her picture.

Watch the WHTM news story below: