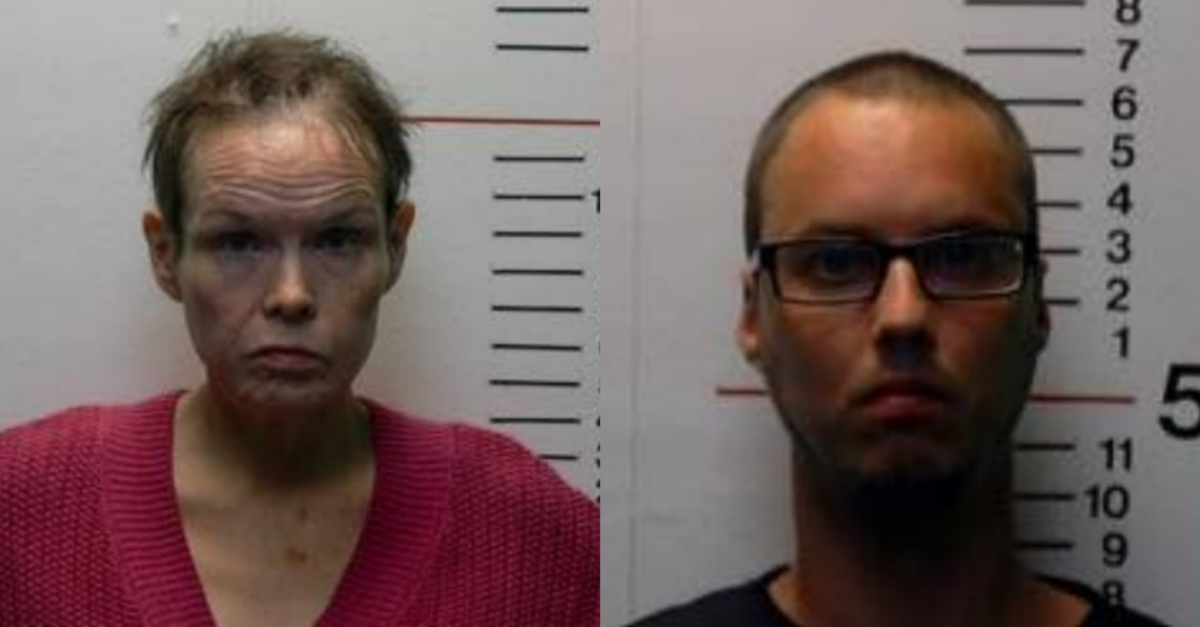 A woman allegedly murdered her “husband” before recruiting another man — the boyfriend of the victim’s daughter — to dismember the body.

Cops in Middletown, Ohio, identified the lead defendant as Bonnie Marie Vaughan, 59. They said John Havens, 34, stepped forward on Tuesday to confess what happened. Officers said they arrived at a home to find the victim dead. Vaughan allegedly fled the scene, but cops captured her, according to the police department.

“He underwent an autopsy at the Montgomery County Coroner’s Office,” administrator Amy DeBorde said in an email. “This is a suspected homicide, so this is all the information we will release.”

Vaughan allegedly admitted that she shot and killed her husband on Monday in the garage of the home at 5635 Stone Path Drive, according to authorities cited in a Journal-News report. Investigators are still trying to determine if the couple were actually married, said Acting Middletown Police Chief Eric Crank. He did indicate the two were in a “domestic relationship.”

As for Havens, he was dating Fellman’s daughter, according to documents obtained by Cincinnati CBS affiliate WKRC.

Havens allegedly said Vaughan picked him up Tuesday, according to reports. She asked if he could help her get rid of a body, police said. They went to the home. Havens saw Fellman’s body in the garage, cops said in reports. He allegedly said he cut up the body with a hand saw from that garage.

Officers did not suggest a motive. Police said they responded to that home in the past for domestic disturbance calls involving the couple, according to the Journal-News.

Neighbors told WKRC the incident was — in the television station’s paraphrasing — “shocking and unexpected.”

Neighbor Michelle McRoberts told the TV station she did not hear anything but noticed something unusual and out of character for Vaughan.

“She never puts her garage door down,” McRoberts said. “Even in the winter, it’s always up, even when it’s very cold outside. So, that was very odd because everyone noticed her garage door was down. We’re all just really devastated and so sad. I mean, it’s just such a sad situation. So, yeah, it’s shocking.”

She had never seen Havens before, she said. She did note that her son saw him outside the home on Tuesday around noon. She described Vaughan as “a little bit off,” according to WLWT.

“You know, sometimes she didn’t always appear to have it all cognitively maybe together,” she said. “But yeah, I mean, she was very nice. Bonnie was always very nice.”

Neighbor Tamela Kerns told WRKC she saw Fellman almost every day in either the garage or the yard, and he recently introduced himself.

“I can’t believe it,” she said. “Because, I mean, I’m just shocked because, like, we’re just in our house, you know, not knowing something like that is happening right across the street from us. It’s sad. I feel bad for all of them.”

Police said it was Havens who brought the murder to their attention. He showed up on Tuesday at the Middletown Division of Police lobby and asked for an officer, the authorities said.

Vaughan is charged with murder. Havens faces a count each of tampering with evidence and abusing of a corpse.

[Mugshot via Middletown Division of Police]