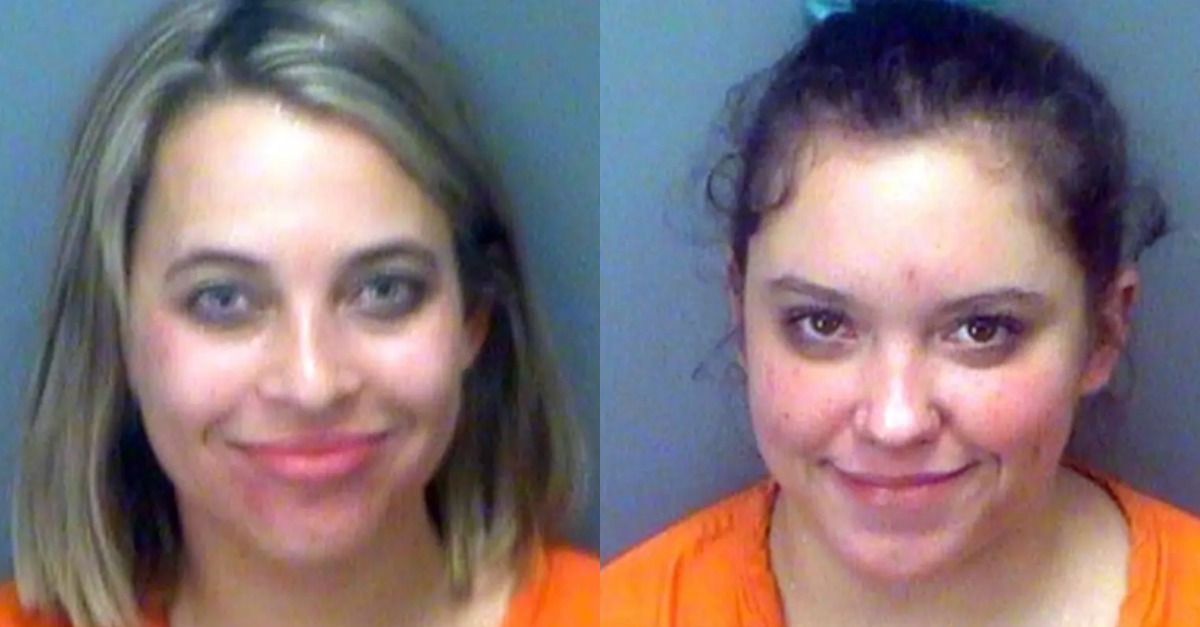 Two Florida women have been charged with felony offenses for allegedly throwing glitter at a man inside an apartment complex in Pinellas County. The seriousness of the charges against them are somewhat belied by the wide and obvious grins both wear in booking photos.

Kaitlin O’Donovan, 27, and Sarah Franks, 29, each stands accused of one count of felony burglary with assault or battery against a man named Jacob Colon. Franks was also charged with criminal mischief.

While the particles used in the alleged incident may be paltry in the extreme, the charges decidedly are not. Each woman faces the possibility of life in prison, according to Florida Statutes. Though the maximum sentences may be extremely unlikely to be dealt, there are plenty of examples where trivial alleged offenses were met with heavy penalties.

Both women hail from Clearwater, Fla. and are alleged to have thrown glitter at the man during some sort of an argument. The small, sparkly and shiny projectiles allegedly hit Colon in his head and upper torso. It is unclear if the alleged victim was injured during the incident.

The relationship, if any, between the three is presently unknown–as is the motive behind the alleged incident.

According to arrest affidavits obtained by local NBC affiliate WFLA, O’Donovan and Franks made their way to the man’s apartment around 3 a.m. on Monday and got into a dispute with him while he was standing on his balcony. The first container of glitter was thrown from across the balcony’s fence, police say. Then, things allegedly escalated.

Next, according to court records, Franks scaled the balcony and climbed over the fence, making her way inside Colon’s apartment where she threw more containers of glitter at him. Then, she allegedly made her way to the front door, unlocked and opened it, allowing O’Donovan access. Once both women were inside, a fusillade of fine and frolicsome dust was allegedly unloaded on the unwilling recipient.

In Franks’s arrest report, obtained by Law&Crime, police allege she “came to the victim’s apartment and battered him, entered the dwelling and battered him further.” After that, police claim, the defendant “was observed kicking a lower apartment window until it broke” while on her way out–the source of her additional charge.

Both women are alleged to have left the apartment in a car after tossing what Orlando Sentinel reporter Tiffini Theisen termed the illicit-under-the-circumstances “iridescent irritant” at Colon.

Police say Franks was driving. She allegedly drove away from the Fairwood Avenue complex in a vehicle that was traced back to her own Seville Boulevard home. The Clearwater Police Department alleges that the getaway car was still warm to the touch and had tell-tale evidence inside when it was found: glitter.

Franks and O’Donovan were both detained in the Pinellas County Jail and assessed bond in the amount of $75,000. Each defendant had subsequently bonded out as of Tuesday afternoon.

In 2013, the American Civil Liberties Union chronicled some of the petty crimes that led to sentences of life without parole. They included siphoning gasoline from a truck, shoplifting two jerseys from an athletics store, and possessing stolen wrenches, Mother Jones reported.