Deshawn Avila Convicted of Attempting to Murder Friend with Pan

‘Truly Beyond Explanation’: Colorado Man Convicted of Hitting Close Female Friend with Tortilla Pan in Her Sleep, Trying to Sexually Assault Her 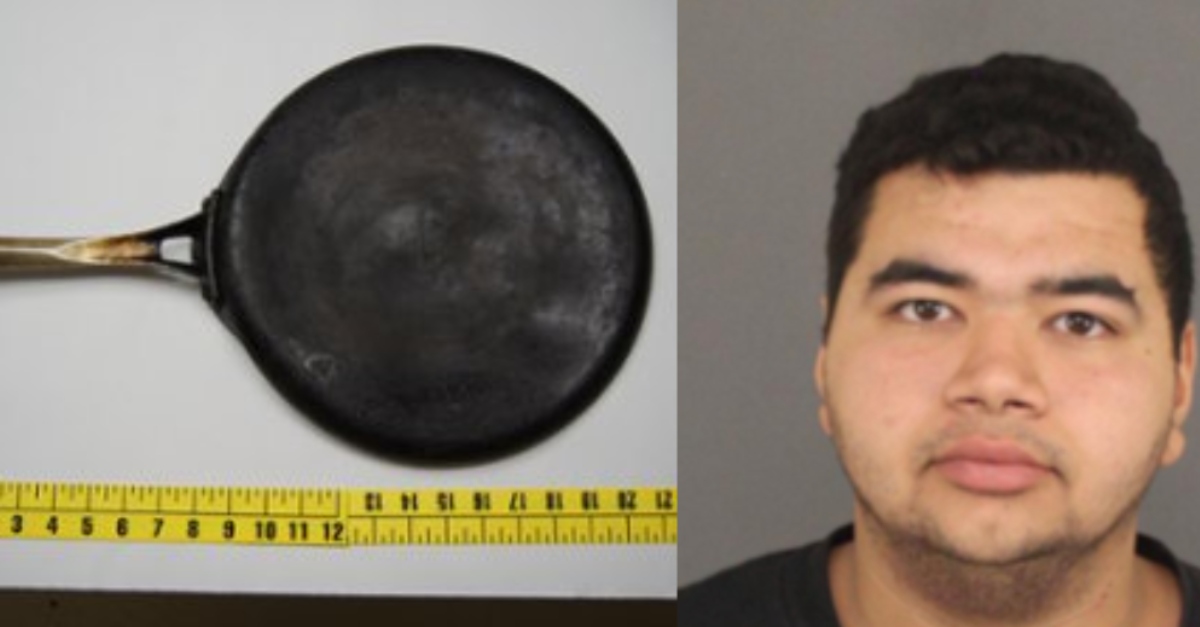 The tortilla pan and Deshawn Avila.

A Colorado man was convicted on Friday of trying to kill and sexually assault a woman who once called him “my second child.”

The crime was all the more egregious because of the closeness between the victim and the defendant. The 17th Judicial District Attorney’s Office described the two as close family friends — so much so that the victim considered the defendant her cousin.

The victim told investigators she had taken care of Avila since he was about 15 years old — when his mother kicked him out — according to the arrest affidavit obtained by The Sentinel Colorado.

“He was part of my family,” she told investigators. “He was my second child.”

It was in that context that the two went to a Denver bar to hang out late at night on Sept. 9 and early into the morning of Sept. 10, 2018. After visiting the drinking establishment, the duo returned to the victim’s home. The victim allowed the defendant to sleep in her room; she proceeded to her son’s room.  Her son was out of town at her ex-husband’s house.

“In the middle of the night, Avila entered the child’s bedroom where the victim slept and hit the victim in the head with her metal tortilla pan,” prosecutors said. “The victim awoke to blood running into her eyes and a large gash on her forehead. The victim’s pants were also down below her pelvic area. The victim attempted to get away from Avila, but he proceeded to assault and strangle her. The victim eventually escaped the attack, and the defendant left the home. Avila was later arrested and charged.”

Doctors found that the victim sustained a “large gaping wound” on the right side of her head, a badly swollen left eye, and “red marks on her neck,” according to the arrest affidavit obtained by the Sentinel Colorado.

Deputies said that Avila, who was out on a $100,000, cut off his ankle monitor ahead of his arraignment in January 2019.

The jury agreed with the account of prosecutors and convicted the defendant.

“For this defendant to ambush his close friend in the middle of the night, smash her in the head with a tortilla pan, attempt to sexually assault her and then strangle her is truly beyond explanation,” said District Attorney Brian Mason. “The victim has suffered enormously and I’m hopeful this verdict will provide some semblance of closure to this horrifying event.”

Avila is set for sentencing to take place on April 5.  The charges are all third-degree and fourth-degree felonies, prosecutors noted.

[Image of the pan via prosecutors; booking photo of Avila via Adams County Sheriff’s Office]