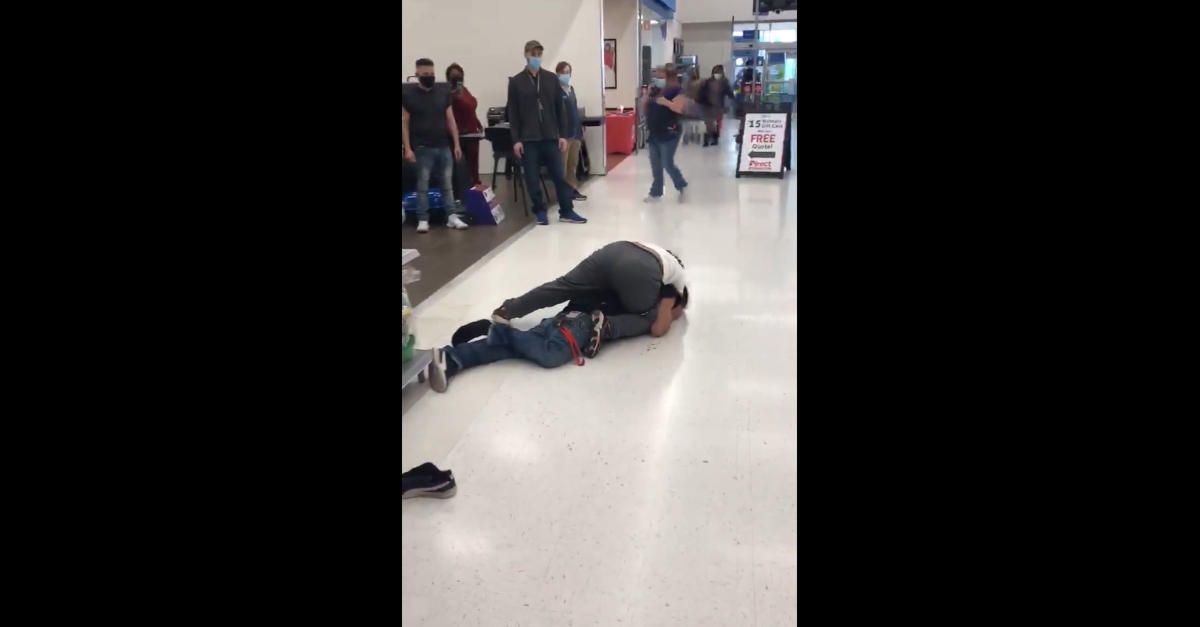 A man in Federal Way, Washington allegedly went on a spree that culminated with a fight in a Walmart store. A bystander caught the brawl on tape.

As seen on video, a suspect in jeans and a black shirt was captured on camera carrying a couple of items after having apparently been confronted by a store employee. A man in a Walmart employee vest followed the suspect down the aisle toward the entrance of the store, caught up to him, and blocked him off. Things escalated. The suspect then exchanged words with a man wearing a white shirt.

Well I never thought I’d see this in real life. I was at a Walmart in Federal Way, WA & an anti-masker got violent with another customer who owned him while he was being escorted out. He refused to give the merchandise to the associate. Look how all that worked out. pic.twitter.com/mUn6bUD39p

The man in the white shirt said something to the effect of knocking out the suspect. The suspect dropped his items. The two of them squared up. A fight ensued.

“What’s up?” the man in the white shirt repeatedly said.

Finally, he took the suspect to the ground. Another man — apparently a security guard — placed a hand on the man in the white shirt, and he released his grip on the suspect.

Local police said the suspect had a lot to answer for in this Tuesday incident. He was identified only as a 29-year-old. Authorities say he drove into a parked car in the Walmart lot and walked away like nothing happened, according to FOX affiliate KCPQ-TV.

He is also accused of trying to shoplift from the store, but store employees confronted him, Federal Way Commander Kurt Schwan told the television station. He allegedly threatened to attack anyone who touched him. That’s when a 21-year-old man — the man in white — got involved.

Cops said the man in white sustained a cut to his hand.

As seen on video, the suspect was maskless. A Walmart spokesperson said that the man had been given a mask at the front door but that it came off during the incident.

The suspect was booked for DUI, hit and run, and attempted theft, officers said.