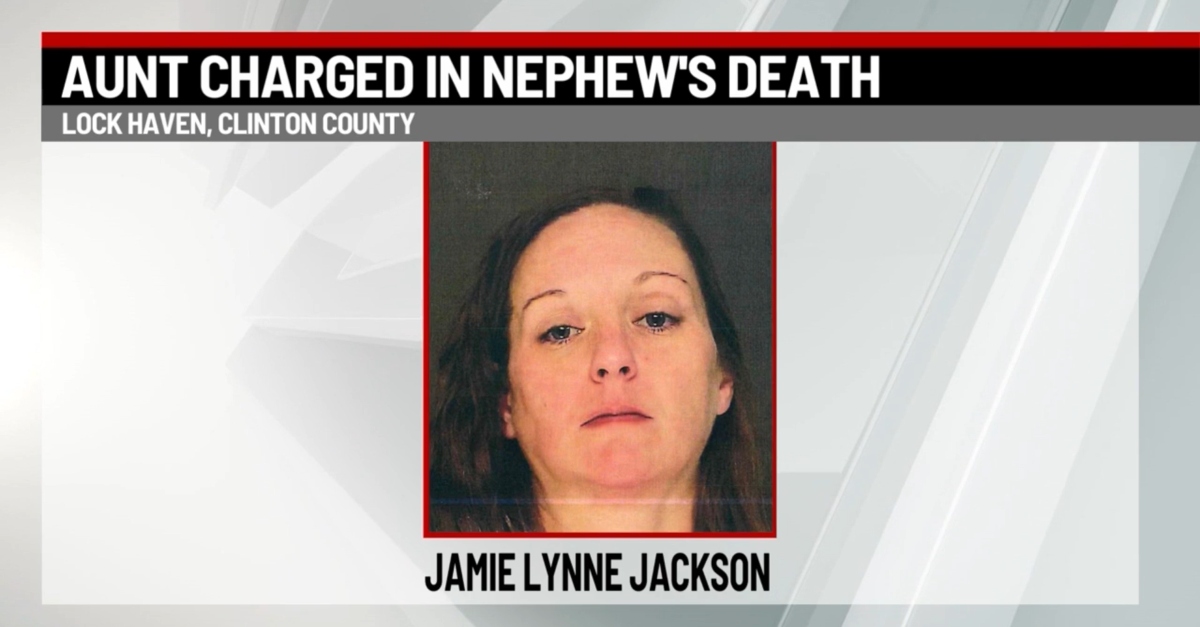 Prosecutors in Clinton County, Pennsylvania are seeking the death penalty against Jamie Lynne Jackson, 36, the woman charged in the death of her nephew Anson Landon Mitchell Stover, 9.

That sets the legal stakes for the defendant in this ongoing case. This isn’t the first time authorities described this death as “torture.” That’s the word Lock Haven City Police Detective Richard Simpson used in a preliminary hearing on Jan. 20, according to NorthcentralPa. He said that bruises covered Anson’s whole body.

The child weighed 54 pounds at the time of the autopsy. Anson weighed 71 pounds at the time of a doctor’s visit in March 2020, months before his death in late Nov. 2020, according to Strouse’s account. Simpson also noted that the victim had spots on his body consistent with cigarette burns. He claimed that Jackson took smoke breaks during an interview.

An autopsy determined that Stover suffered bleeding on his brain, and had blood in his spinal fluid.

As previously reported, the defendant allegedly told cops she found Stover naked in his bedroom, with a plastic tape around his neck on Nov. 28. She removed the tape, put clothes on the unresponsive but breathing child, and placed him in the bathtub. He had fluid coming out of his mouth. In this account, Jackson cleaned the room, shampooed the carpets, and got rid of the tape. She left the 9-year-old in the tub for two days while she took care of her two children and Anson’s three siblings. It was only after two days passed that she realized he wasn’t well: She touched his face, which was described as cold and hard.

Jackson had been taking care of Stover and his siblings after their mother passed away. Jackson called her father for help, though she had not spoken to in three years, for help. He was the one who called police.

Members of the community held a memorial walk in Anson’s honor last December, going to his school and then his home.

“The kids wanted to be here,” said a local mother quoted by The Lock Haven Express. “They wanted to do something for Anson. We all did. This kind of thing shouldn’t happen to a little boy.”

Strouse has told the newspaper the other five children are safe, but he declined to detail their whereabouts.

You can read the prosecution’s filing below: