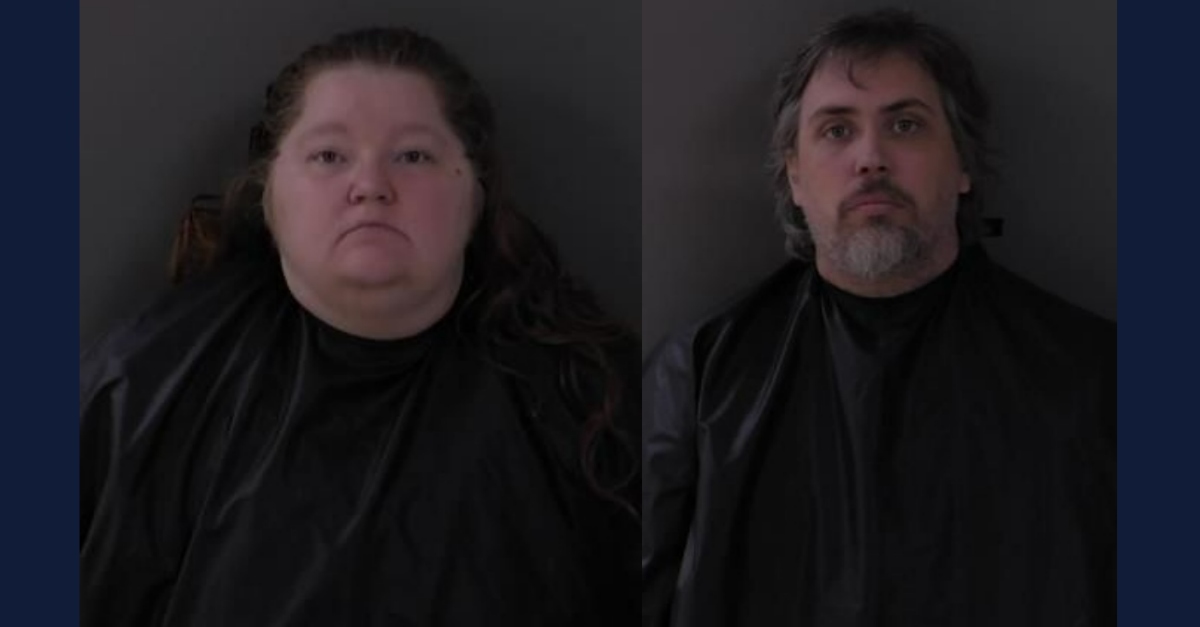 A Florida couple allegedly kept their home in disgusting condition and failed to keep an eye on their 4-year-old daughter, who wandered naked and alone down the street. Police in Vero Beach, Florida, say they arrested Chrystal Slosson, 38, and Michael Allen Slosson, 38, for two counts each of child endangerment, online records show.

Cops described the home as covered in feces, urine, and bugs. Michael allegedly said he left the home dirty because he was depressed and lost motivation whenever he tried to clean. Chrystal, who chewed him out in front of police for playing video games instead of watching their children, said she had a knee injury, cops said. Nonetheless, an officer claimed to see her walk with a cane and to be in good enough condition to clean up if she wanted to.

According to the arrest affidavit, an officer responded to an address on 18th Street where the young girl walked around the neighborhood naked and supervised. A resident said he saw her walking in front of his home. He rushed to help her and called law enforcement, police said.

Two construction workers down the street said they had seen a little girl exit from a nearby home and head west, police said. The officer checked the home in question, and Michael Slosson opened the door, police said. Slosson allegedly said he put the child–identified in documents as G.E.S.— to bed at midnight. The officer claimed to immediately see signs of the home being in an unhealthy, hazardous condition.

“Upon further investigation, on the north side of the house I observed a window open with the screen off,” police wrote. “The room, which can be plainly observed from outside of the residence, had an odor of feces and I also observed feces smeared onto the walls of the bedroom with miscellaneous trash on the ground deeming it unfit and unsafe for a child.”

The couple also had a 9-year-old child, S.S., who lived in the home.

Amid the police investigation, a local DCF area supervisor told cops the parents were investigated five times since 2015, with the main complaint being environmental hazard, according to the affidavit.

“Living flies and other bugs were observed in all parts of the residence,” the officer wrote, describing a new walkthrough with a DCF investigator that happened the day after the incident. “The residence possessed a distinct odor of urine and feces that was almost overpowering in some parts of the residence. Within the children’s bedroom I also observed fecal matter smeared and dried approximately three quarters the way up the bedroom door and parts of the walls. I also observed a large amount of feces on the ground within the bedroom.”

Michael allegedly said the feces on the walls were from his daughter “painting” with the fecal matter.

A hallway bathroom floor was covered in urine and feces, police said. Dishes piled in the kitchen sink, and there was putrid residue on both the stove and counter, cops said.

On Chrystal’s first contact with police, she allegedly said she was in her bedroom when the child’s escape happened, and she did not hear her daughter exit through the window. Chrystal told the officer about having insomnia, according to the affidavit.

Police wrote, “Let it be noted while speaking with Chrystal, she spontaneously stated, ‘you should have been watching the children, not playing your stupid video games!’ to the father, Michael.”

Both of the Slossons allegedly suggested to police that he child must have exited their home through her bedroom window and neither of them knew she was gone until police brought her back home.

“I also observed all parties to appear dirty and unkempt,” police said. “Both children possessed a strong odor and appeared unclean. I also observed feces on the left knee of Mr. Slosson’s pants.”

Michael posted bond, online records show. Chrystal remains in jail on a $10,000 bond. Neither of them have attorneys of record.