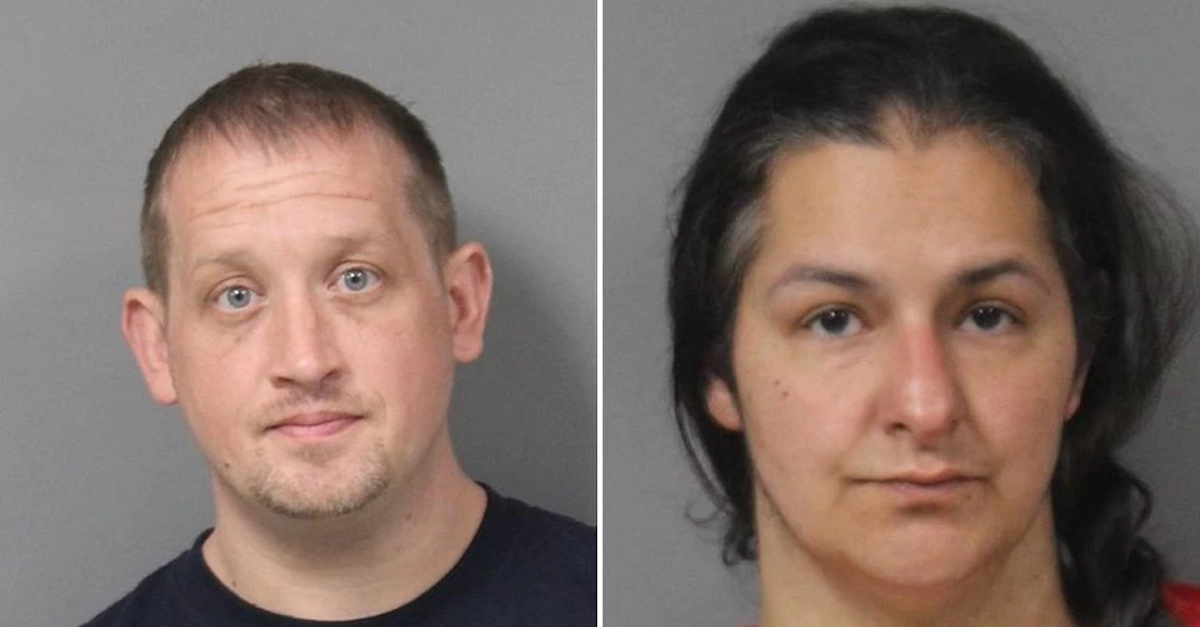 Brian Morrow and Mia Morrow, via the Berrien County Jail.

A married couple in Michigan were arrested after their autistic 8-year-old son — who police say was severely emaciated — was found dead last month. Brian R. Morrow, 41, and his wife, 34-year-old Mia A. Morrow were taken into custody on Wednesday and charged with one count each of first-degree murder, possession of a controlled substance – methamphetamine, and possession of a controlled substance – dimethyltryptamine (DMT), jail records reviewed by Law&Crime show.

According to a report from Kalamazoo CBS affiliate WWMT-TV, officers with the Saint Joseph Department of Public Safety at approximately 1 p.m. on May 3 responded to a call about a dead child at a home located in the 700 block of Columbia Avenue. Upon arriving at the residence, first responders reportedly found a deceased 8-year-old boy laid out on a couch. The child reportedly appeared to have been dead for some time and was extremely thin for his age.

In subsequent interviews with investigators, the boy’s parents allegedly revealed several disturbing details surrounding the circumstances of their son’s death.

Mia Morrow reportedly told investigators that her son was “severely autistic” and had been “going downhill” prior to his death. She claimed that he had been refusing to eat or drink anything, which is why he weighed only 31 pounds when he died, per WSBT.

The boy’s mother further stated she noticed her son was suffering from breathing problems just prior to his death and even admitted that she and her husband should have taken him to the emergency room the previous day.

Even more disturbingly, the parents reportedly confirmed their son had actually died the previous day, but they chose not to call authorities or tell anyone else about his death. It was the boy’s grandmother who reportedly came to the house and discovered the child dead on the living room couch before calling 911.

Asked why they did not contact authorities sooner, Mia Morrow reportedly told investigators that she did not want to “let go” of her son. Her husband reportedly said that he wanted to allow his wife some time with their son before the police came.

Later that day, Brian and Mia both reportedly tested positive for meth.

Investigators also reportedly learned that Child Protective Services (CPS) had previously investigated the couple multiple times over their treatment of their son.

In fact, despite the boy’s behavior allegedly having gone “downhill,” the couple pulled him out of the LOGAN Autism Learning Center in Benton Harbor. Mia Morrow reportedly told investigators that they stopped sending him to the facility because they were “sick of them calling CPS” to report them for mistreating the boy.

Court records reviewed by the television station reportedly showed that staff at the LOGAN Center were particularly concerned with the number of times the child threw up on a daily basis.

Additionally, investigators spoke to Brian’s daughter, who reportedly used to live with the Morrows and their son. The girl, whose name and age were not reported, reportedly told police that Mia and Brian didn’t like to deal with their son “because he smelled like urine” and would often lock the 8-year-old boy in his bedroom. She reportedly described the child as “so skinny you could put your finger around his arms.” The daughter also told investigators that she suspected Brian and Mia were both using methamphetamine.

When reached for additional details on the case, the Saint Joseph Department of Public Safety directed Law&Crime to the Berrien County Prosecutor’s Office. The prosecutor’s office did not immediately respond to messages from Law&Crime.